Man Kills Mother of five after defrauding her N530k in Ogun 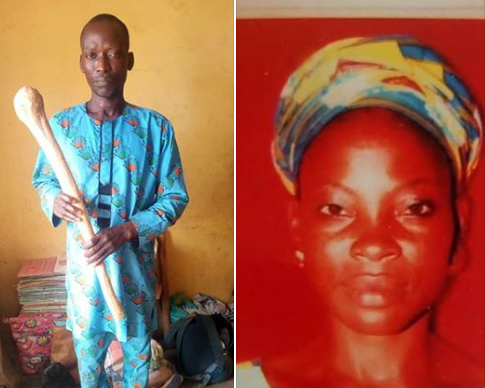 The Ogun state police command has arrested 47-year-old man, Kazeem Adebayo, over the alleged murder of his lover, Abosede Adesanya, a mother of five.

The state Police Public Relations Officer in Ogun, DSP Abimbola Oyeyemi, in a statement released on Friday February 1st, said Kazeem called Abosede, his lover, on January 25th to come to his house with the sum of N530,000 that he had a parcel of land to sell to her.

Abosede left her house after she informed her mother she was heading to Kazeem’s house. She however did not return home as expected, forcing the mum to lay a complain at the Ijebu-Igbo Police Division

“The suspect who resides in Ijebu-Igbo was arrested following a complaint by the mother of the deceased, one Amoke Onasanya, who lodged a complaint at the Ijebu-Igbo Divisional Headquarters on January 25 that her daughter received a call from her lover on  January 24, 2019. The lover claimed to have got a plot of land for her (Adesanya) to buy for her mother, consequent upon which the deceased left home with the sum of N530,000.

“The mother stated further that hours after her daughter left home, her cell phone was switched off and she had not been reached since then. Adebayo denied knowing the whereabouts of the deceased. This prompted the Commissioner of Police to order the Deputy Commissioner of Police in charge of SCIID, DCP Wale Abbas, to take over the investigation with a view to uncovering the mystery behind the sudden disappearance of the victim who was a mother of five.”

After much interrogation, Kazeem confessed to killing Abosede and burying her in a shallow grave inside his house.

“He confessed further that he used a club to hit her on the head, which led to the woman’s death and subsequently buried her in his house, in order to cover any trace of the woman’s death to him. He also confessed that he used N30,000 out of the money he took from the deceased to settle an outstanding debt while the remaining N500,000 was being kept with one of his friends,” the statement said

The police say Kazeem will be arraigned in court soon

Man Kills Mother of five after defrauding her N530k in Ogun was last modified: February 2nd, 2019 by Reporter

‘How I escaped from Delta State prison’ – 22-year old herder