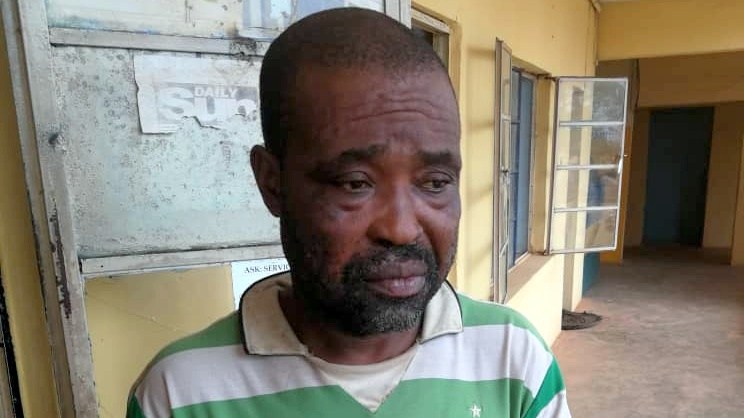 A 45-year-old man, Julius Ochim, has been arrested by the Ogun State Police Command for allegedly impregnating his own daughter, who eventually gave birth to a baby girl.

The Command Public Relations Officer, Abimbola Oyeyemi, who spoke to journalists on Tuesday, said the suspect was arrested following a complaint by his daughter, whose age was not given.

”The man was arrested following a complaint by his daughter who reported at Shagamu Police Division that her father has been having carnal knowledge of her for the past eight years after the death of her mother in 2009,” he said.

Mr Oyeyemi added that, consequently, the lady reportedly got pregnant for the suspect and gave birth to a baby girl who is now three years old.

On why she did not report after many years, the lady reportedly told the police that her father ”used to threaten her with cultural implication of refusing him to sleep with her.”

”Upon the receipt of the report, the DPO Shagamu Division, CSP Aduroja Moses led the detectives to the residence of the man where he was promptly arrested,” Mr Oyeyemi added.

He said on interrogation, the suspect confessed to the crime but blamed it all on the devil’s handwork. He reportedly confessed that he had been sleeping with the young woman since the demise of his wife.

The police spokesman added that the suspect disclosed that he started having ‘problems’ with the victim when she started going out with ”another person whom she said she want to get married to”.

”He confessed that the he was trying to prevent the girl from getting married so as to continue having his way with her.”

Meanwhile, the Commissioner of Police, Ahmed Iliyasu, has directed that the suspect be transferred to Anti-Human Trafficking and Child Labour Unit of the State Criminal Investigation and Intelligence Department for further investigation and prosecution.

Man lands in Police net after impregnating own daughter was last modified: July 31st, 2018 by Reporter