Home Weird News Man murders his wife becauses she taunted him for having a “small male Organ” his been jailed for life.
Weird News 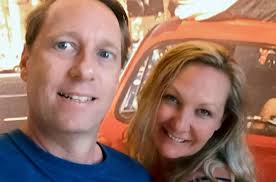 An estate agent who stabbed his wife to death after she mocked him for having a “small penis” has been jailed for life.

David Clark, 49, will spend at least 15 years behind bars for murdering his wife of 10 years, Melanie, 44, at their home in Worcestershire on New Year’s Eve.

According to Clark, his friend’s lesbian daughter, Katie Bastians, 30, had sex with his wife after spending the evening with the couple and her dad Stephen, 58. Clark told Birmingham Crown Court he was asleep at the time of the alleged one-night stand, two days before the murder.

Steve and his daughter Katie spent the night at my house.  The evening was fun. My wife and Katie were drinking. I went to bed about midnight in my little room.

Steve was downstairs on the couch and Katie and Melanie were in the main bedroom. I wasn’t aware of anything happening. There was a lot of giggling.”

He said his wife later told him “Katie started doing things to her”.

My wife mentioned it to me because she found her on Facebook and said ‘it looks like Katie has a girlfriend’.

I said, ‘Well surely you could stop it – you could say no or turn away.’ She did not answer me. I said, ‘It doesn’t matter, I just appreciate that you are honest.’ “

Jurors were also told how Melanie previously made her husband sign a contract giving her permission to sleep with other people. Clark said his wife brought up the with Katie again at home two days later after they had been to a friend’s New Year’s Eve party.

She asked, ‘Would I like Katie in her sexy underwear?’ She talked about the things that happened between her and Katie.

She said these things in a revengeful way. She was in my face, in a nasty, nasty way like she was proud of what she had got up to. I had no idea why she was saying these things.

Clark said his wife, who used to mock his small penis, continued to taunt him about the tryst. He then stabbed his wife with a knife before dialling 999 and confessing.

Melanie, whose four children were from a previous relationship, was pronounced dead 12 minutes into the New Year. Her sons Sheldon, 23 and Slade, 20, returned home to find the property in Bromsgrove swarming with police.

Clark, whose birthday is on New Year’s Day, was arrested at the scene in his blood-soaked pyjamas. The former military medic was convicted of murder after jurors deliberated for six-and-a-half-hours.

He had denied the charge, claiming he suffered a “loss of control” after being subjected to sexual humiliation. During his trial, he claimed he snapped after mum-of-four Melanie taunted him that she had sex with the lesbian daughter of his best friend. He also said she mocked the size of his penis.

Man murders his wife becauses she taunted him for having a “small male Organ” his been jailed for life. was last modified: July 13th, 2018 by Igbokwe John