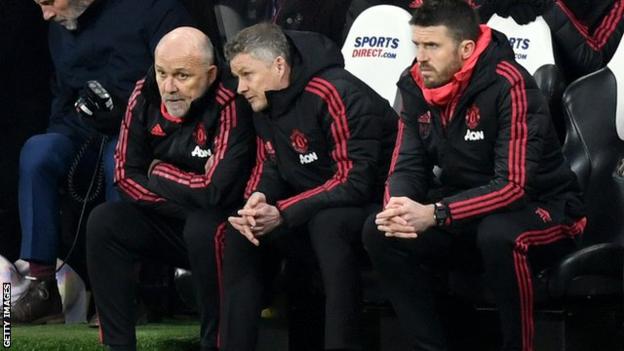 Interim manager, Ole Gunnar Solskjaer called Manchester United’s 2-0 home loss to Paris St-Germain in the last 16 of the Champions League a “reality check” but insisted “mountains are there to be climbed”.

Solskjaer told BT Sport: “You can’t lay down and say it’s over.”

United midfielder Paul Pogba was sent off in the last minute of normal time for a second bookable offence.

This was Solskjaer’s first defeat as interim boss after winning 10 of his first 11 games since taking over from Jose Mourinho in December.

“Today was a kind of a reality check on the level of the top teams,” he added.

“That is the level we want to get to. Top four is one thing. United should be at the top. They are a top team. [Our players] know we need to step up our level. We are disappointed.”

Neither side impressed in the first half, which ended on a negative note for Solskjaer when attacking duo Jesse Lingard and Anthony Martial came off injured.

“We had quality players come on, but they gave us something and let’s hope they are not too serious,” he said about the pair. “They are muscle injuries; we have to wait a couple of days.”

Eight minutes after the restart defender Kimpembe volleyed in from close range before France World Cup winner Mbappe added to the misery with a close-range shot in the 60th minute. Solskjaer later said that Kimpembe should have been sent off for a challenge on Marcus Rashford.

And in the final moments of the match, Pogba, who has scored 13 goals and provided nine assists this season, was sent off when a crude challenge on Dani Alves earned him a second booking. He will miss the match in Paris.

“There is a determination in the dressing room to put this right,” Solskjaer said, looking ahead to the away leg on 6 March.

“We will give it a go. If we get to half-time with a one-goal lead, that is what we have to aim for.”