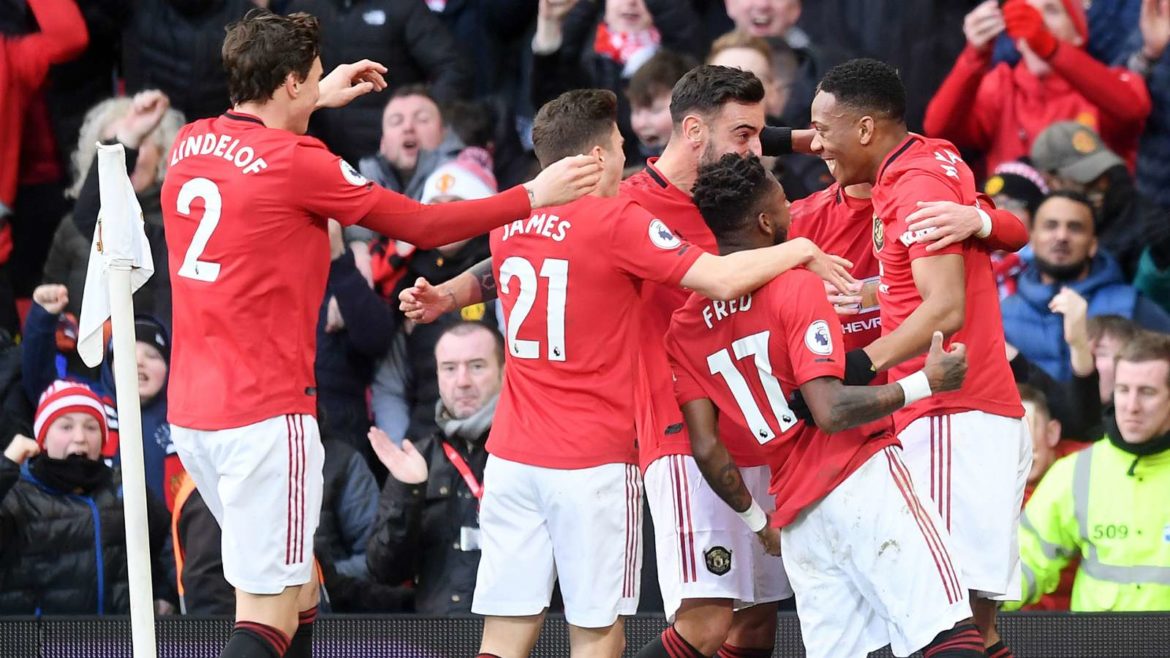 Two costly mistakes from Ederson handed Manchester United a derby victory over Manchester City on Sunday to put Liverpool on the brink of a first Premier League title.

Anthony Martial fired the Red Devils ahead in the first half with a shot that City’s goalkeeper should probably have kept out at his near post.

Ole Gunnar Solskjaer’s side, beaten at home by City in their past three league meetings and the EFL Cup semi-final first leg, claimed a top-flight double over their city rivals for the first time since 2009-10 to leave the champions’ title defence hanging by a thread.

Pep Guardiola’s first league loss at Old Trafford brought an end to City’s five-game winning run in all competitions, as United boosted their hopes of qualifying for next season’s Champions League.

City were 3-0 up after 38 minutes on their last visit to their neighbours in the EFL Cup, but this was a cagier affair, with the only early chance of note coming through Raheem Sterling’s low shot, which was comfortably saved by David de Gea.

United grew in stature, with Ederson making two saves from good Daniel James and Martial chances, but the City keeper was at fault for the opener as he allowed Martial’s volley through his grasp after a clever Bruno Fernandes free-kick.

City were upset that Ilkay Gundogan had been punished for the challenge that led to the goal, but the visitors were fortunate three minutes before the break when Fred was booked for diving after he was tripped by Nicolas Otamendi in the box.

City had only one shot in the first half, their lowest tally in a league game since October 2018 against Liverpool, but Sergio Aguero, who later went off with an apparent thigh problem, had the ball in the net three minutes after the restart only for VAR to uphold the initial offside call.

Ederson almost gifted Martial a second with poor control only to make a timely challenge on the goal line, but it was City who were threatening the most, with Phil Foden’s shot tipped over by De Gea and Sterling failing to connect properly with a Riyad Mahrez cross.

United held firm in the closing stages before Ederson made the result safe, his attempted throw to Benjamin Mendy rolling straight to McTominay, who curled home a fine first-time finish from 30 yards.

READ ALSO: NIGERIAN MAN CATCHES CORONAVIRUS IN THE US