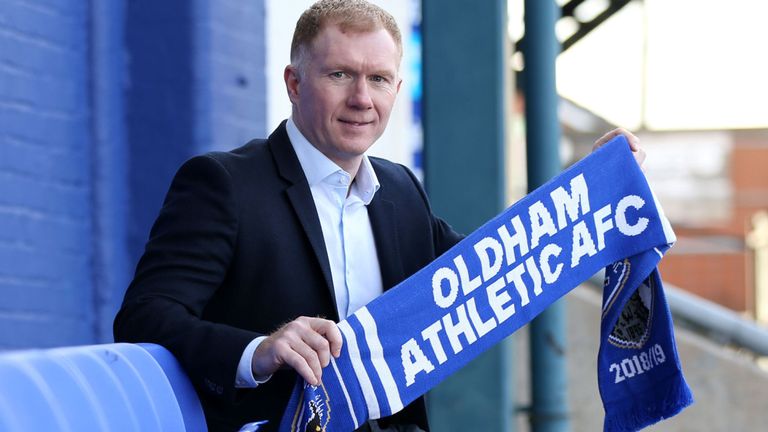 Paul Scholes says “the time is right” to take his first steps into management after being named boss of League Two club Oldham Athletic.

The ex-Manchester United and England midfielder, 44, has signed an 18-month contract with the team he supports.

He was cleared by the English Football League to take the role, despite holding a 10% stake in Salford City.

“I wouldn’t be here if I didn’t feel excited,” said Scholes, who added he was “happy” to be in League Two.

“I’ve prepared well for it, I’ve watched the team play and I think they are capable of winning a lot of games. If they don’t, it’s my fault.

“It’s a squad that should be pushing for promotion – that might be out of reach for this season, but certainly next season.”

Scholes, who will be bringing in former Latics coach Mike Priest as his assistant, takes over with the club 14th in the table, nine points off the play-offs and 14 points above the relegation zone.

The United legend said in October 2017 he had been interviewed for the manager’s job at Boundary Park before Richie Wellens was appointed, and spoke of his desire to “get back into football in some capacity” after news of his talks with Oldham were reported in January.

“It’s no secret how much he has wanted this job in the past and how much he loves this club, so I’m very happy to bring him into our family at Oldham Athletic,” said owner Abdallah Lemsagam.

“Paul will have my backing 100% and hopefully we can work together to bring success back to this club.”

Salford, who are fifth in the National League, have confirmed that Scholes has resigned as a director of the club – but will retain his shareholding.

The Ammies could be promoted to League Two this season and EFL rules prevent a person holding roles with two clubs at the same time without prior consent, although a holding of 10% or less in a club is disregarded providing it is held “purely for investment purposes”.

“Although Paul was never operational in Salford City he will resign as a director of the football club, allowing him to focus completely on his new role at Oldham,” Salford said in a statement.

“From the start we have always said that each of the ‘Class of 92’ would offer different levels of commitment dependant on their individual roles.”

Salford have won three promotions under the ‘Class of 92’s’ ownership and now harbour hopes of climbing into the EFL for the first time in their history.