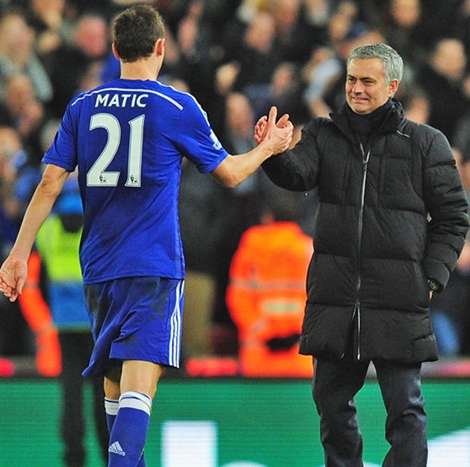 Chelsea FC midfielder, Nemanja Matic has reportedly agreed personal terms with Manchester United as the Serbian is set to reunite with Jose Mourinho at Old Trafford.
According to the Manchester Evening News, Matic who has previously been keen on a reunion with Mourinho after their previous two-year spell together at Stamford Bridge, verbally agreed a deal to move to Old Trafford. Both clubs still need to agree a fee however.
Earlier today reports from the London Evening Standard claimed the Blues had slapped a £40m price tag on the midfielder.
It remains to be seen whether the Red Devils will meet their asking price, or if Antonio Conte will sell to their title rivals.
But Portuguese boss Mourinho s determined to land his second signing of the summer following Victor Lindelof’s arrival from Benfica earlier this month.
Mourinho was the man who brought Matic to Chelsa in 2014 and the pair won the Premier League the following year.
The duo’s relationship was thought to be strained in the months leading up to Mourinho’s sacking in December 2015 but it seems the 54-year-old wants to build something special once again at United.
Manchester United Reportedly Agree Personal Terms for Chelsea Star was last modified: June 23rd, 2017 by Arinze Ago