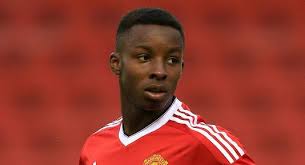 Kehinde is eager to play for Nigeria ahead of England.

The 19-year-old met with the first vice president of the Nigeria Football Federation (NFF), Shehu Dikko, alongside his parents before meeting with coach Rohr.

Rated by many as one of the talented kids in the U23s of the English Premier League giants, he presented an Ashley Young jersey to Dikko in the meeting attended by his parents.

Rohr is in the London for Tuesday’s international friendly against Serbia at the Hive Stadium.

The German is seeking to make it two out of two in this international window, after the Eagles beat Poland 1-0 last Friday in Wraclow.