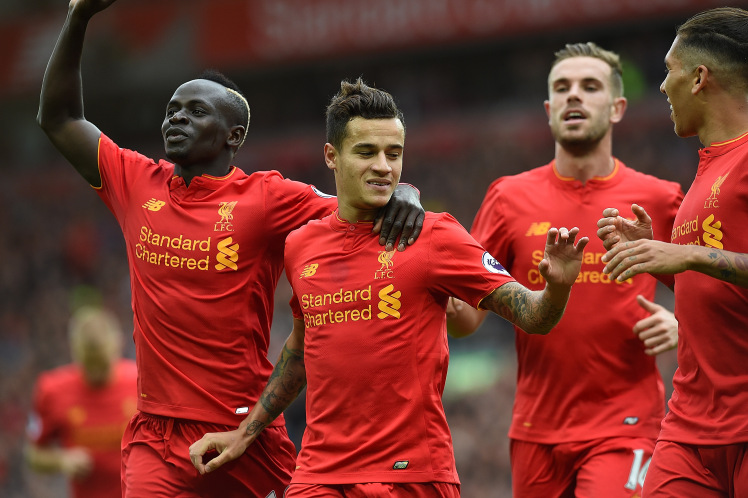 Former Arsenal goal hero, Ian Wright has said that Sadio Mane and not Philippe Coutinho is Liverpool’s most prolific player and deserves all the attention and accolade his Brazilian counterpart has gotten so far.

Another electric performance by the Senegal winger against Hoffenheim on Wednesday drew more rave reviews for a player who has become even more indispensable to Liverpool than the Brazilian. Social media was full of jokes about whether Barcelona realise they are trying to buy the wrong player.

Hoffenheim never came to terms with Mane’s ability to break defensive lines at pace or his frightening ingenuity when in sight of goal. His two back heels played their part in both Emre Can’s goals as Liverpool, without Coutinho, romped to a 4-2 win.

“(Mane’s) a special player,” said former favourite Steven Gerrard on BT Sport. “He’s becoming a fan favourite here, he scores all kinds of different goals. Lots of pace and he’s a threat all over the pitch.

“He’s very direct and when he gets in he’s got pure quality.”

The statistics bear out the astonishing impact Mane has had on Liverpool since joining them last summer in a 34 million pound ($44 million) move from Southampton.

Since then, Liverpool have won 18 and lost only three of the 28 times he has played for them in the Premier League, scoring as a team well over two goals per game. In the 12 games without him, Liverpool won just five and lost three, netting a third fewer goals.

When Mane took four weeks off to attend the African Cup of Nations last season, Liverpool’s title challenge disintegrated, and it is a measure of how well they did that they still managed to qualify for the Champions League despite being again deprived of his services through injury in April and May.

On Sunday, he will be unleashed on Arsenal, who are well aware what to expect. In his first game for Liverpool at the start of last season, the winger scored a breathtaking goal after bursting past two defenders, cutting in from the right and unleashing an unstoppable shot.

“I saw the defender (Calum Chambers) coming to me so I tried to slow down. Why? I knew I could go quicker than him. No problem,” he said in reliving the goal for the Daily Mail.

“So when he thought I was slowing down, I let him come. Within one metre? That was it. I left him back. I stopped running a little bit and then (darts his hand) . . . I go! One metre for me to go quick, then he has no chance to stop me.”

That goal set the standard for his season. Another 14 Premier League goals have followed, more than any other player for Liverpool, even Coutinho.

Adding the Brazilian’s quickness of thought in midfield to Mane’s pace and power up front would make Liverpool even more potent.

When the pair played together at the start of last season, Juergen Klopp’s side looked unstoppable, a clear indicator as to why Liverpool’s owners are so insistent the Brazilian will not be sold next week when the transfer window closes.