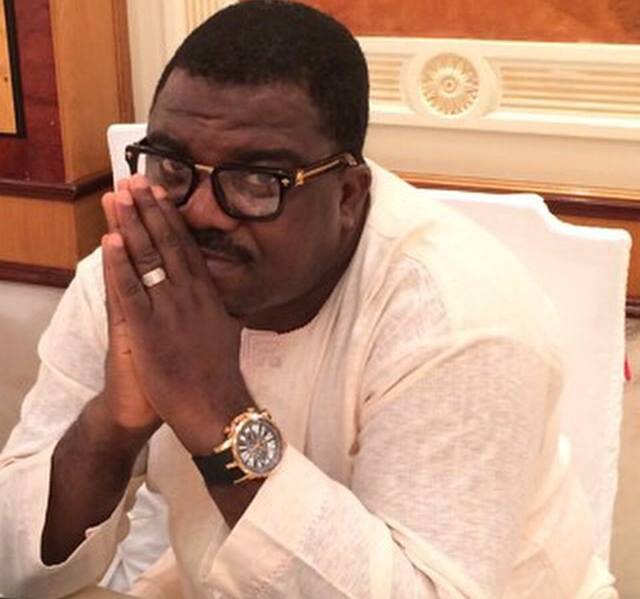 When news broke a few weeks back that Femi Davies was about to turn 50, many didn’t quite believe it. This is because he does not look that far gone in age. There is nothing about him to suggest that. He is still as athleti as he has always been. And he is restless by nature.’

His life story has been an interesting one. Despite the fact that he is a veteran journalist, all his life, he has been in the Entertainment sector managing big artistes which has brought him close to many of the big acts in the Juju, Fuji and Hip-Hop sectors.

He has also been involved in producing movies. He has also been a Journalist and a Publisher of a Magazine. He has also been a Media Consultant to many politicians like OGD and now he handles the media relations of the new Aare Ona Kakanfo. He also runs an online media outfit Metro News. Give it to Femi, he has come a long way. How does it feel turning 50? “I still can’t believe I am 50”, he says.

“Each time I look at the IV, I ask myself, am I really 50? Just like that. It actually came to me as a surprise. I am a very careful person. I try to live a good life, in terms of what I wat and what I do. I think God has been very faithful”. Has he had a good run in terms of life, or are there areas he would have changed? “Yes, I used to wonder, maybe it was a mistake that I got interested in the Entertainment side of Journalism. Why? Because I can imagine with the kind of contact that I have and the kind of name I have, maybe if I had been in politics, Covering Politics, Covering Economy, Covering Banking, by now I would have been better off in terms of what comes in. Yes the good will is there, but its a thank less profession, it a thankless industry. What took me this far is the grace of God”.

What is his 50 year story like? “My story is very complex. I was born in Lagos, I grew up in Lagos. Up to secondary school level, my education was in Lagos. I am actually from Abeokuta. Based on that, I went back to Abeokuta. I wanted to read Mass Comm. I love TV presenters like Sienne, all well Brown, Frank Olize in those days. I went to Ogun Poly. It was about the best at that time. School was fun. I rose to become President of the Mass Comm Students. It was from school that I started music promotion.

I was the President of Mercury Club. We used to bring in artistes to school to perform. That is where my relationship with K1, Ayuba, Shina Peters started, when I was in Ogun Poly. I became a campus promoter. Right from school I started working, I ventured into artiste management. After school I served in Lagos. I served with the Edo State Broadcasting Service on Ikorodu road then. That was how I started my journalism career”.

How did it start? I usually go to Todays Choice Magazine to give them stories about entertainers:, he said. “I have friends there. Then I was managing Pasuma. In those days when you go to media houses you will give them gists and then your own stories concerning your artistes. I am talking of those days of writing stories in newsprint. One day I got there and I was gisting with them and Uncle Muka Popoola called me. He said you went to school. You studied Mass Comm and now you are into artiste management. In 10 years time, in 20 years time, when you look back what would you have achieved? That you manage Pasuma and others?

He said why can’t you practice journalism? I said I don’t want to see myself starting as a cub reporter. He said since you are already doing society for us, do a 2 page column and lets see how it goes. He said there is an opening here. The person writing the page then was on suspension.

That was how in 1994 I started my career in Today’s Choice. Before then I had gone for my 1st Industrial Attachment with Radio Lagos and Lagos Television in 1989. Later I did one year in OGTV. I also worked in Chief Osoba’s Magnet Media, a community magazine in Abeokuta. That was in my final year in school. I was like a cub Reporter. Coming to Todays Choice it was not entirely news because all along I had been doing music promotion, I am doing Movie Promotion. Much later, I moved to Hearts Magazine to become the deputy editor. From Heart Magazine, me, Segun Banjo, Yemi Oladeinde set up Ace Magazine. We came with Ace.

But sooner than later we ran into trouble with the story on Bola Ige’s death, Fryo’s involvement and so on. That discouraged us from journalism. We decided to rest the paper then and we went into Movie Production, Music Production and we started managing more artistes. We started with Pasuma, later came Shina Peters. So what I write about is what I am doing right now. It has been an exciting journey. Maybe that is why I didn’t know I was growing old. If you are in entertainment you will just see that you are trending.

Any regrets? “Maybe, how my career has affected my private life,” he explains. “Specifically I know that I am a family oriented person, but because of the kind of job I do, your bed is not your friends in this business. There was a time I went into hotel management and then event management and marketing. All these things I was doing kept me off my home. Even on some of the streets, I have lived before people don’t know me.”

“And the possibility of having your head correct is difficult. You are in a service –oriented industry when your client is not leaving how can you say you want to leave. The picture I had, was to have a home, where daddy is around in the evenings. It affected my dream of a perfect home. But I still have a strong passion for the family.”

Many Don’t Know I Started As A Music Promoter •FEMI DAVIES On His New Life @ 50 was last modified: November 13th, 2017 by Seye Kehinde