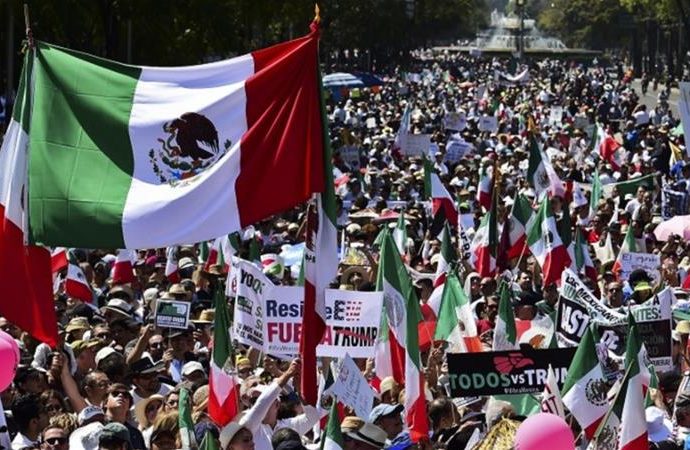 Mexicans have held massive protests against US President Donald Trump, hitting back at his anti-Mexican rhetoric and vows to make Mexico pay for a “big, beautiful” border wall between the two countries.

Marches got under way on Sunday in some 20 cities across the country, including the capital, Mexico City, where thousands of people were expected to flood a central avenue dressed in white and waving the red, white and green of the Mexican flag.

Dozens of universities, business associations and civic organisations are backing the protest.

“It is time we citizens combine forces and unite our voices to show our indignation and rejection of President Trump, while contributing to the search for concrete solutions,” said the coalition behind the marches.

US-Mexican relations have plunged to their lowest point in decades since Trump took office on January 20 .

Trump, who launched his presidential campaign calling Mexican immigrants “criminals” and “rapists,” has infuriated the US’ southern neighbour.

He also announced plans to stop illegal immigration by building a wall on the border and make Mexico pay for it .

Mexican President Enrique Pena Nieto cancelled a January 31 trip to Washington over Trump’s insistence that Mexico pay for the wall.

Trump has also wrought havoc on the Mexican economy with his threats to terminate the country’s privileged trade relationship with the US, blaming Mexico for the loss of jobs in the country.

The Mexican peso has taken a beating nearly every time Trump insisted on renegotiating the North American Free Trade Agreement (NAFTA), attacked carmakers and other companies that manufacture in Mexico, or vowed to slap steep tariffs on Mexican-made goods.

The confrontation has stoked patriotic pride in Mexico, where US companies like Starbucks, Coca-Cola and McDonald’s are the targets of boycott campaigns and many people have taken to putting the Mexican flag in their profile pictures on social media.