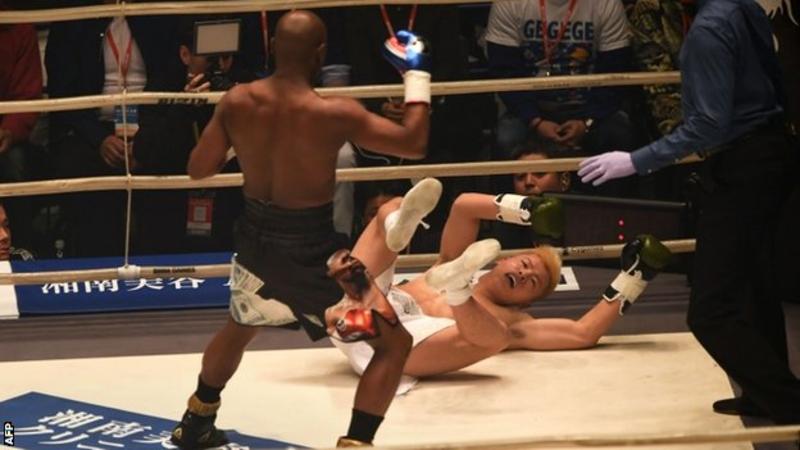 Former five-weight world champion Mayweather, 41, was smiling during the short-lived contest in Tokyo as he floored the 20-year-old three times.

The fight, scheduled for three three-minute rounds, ended with Nasukawa in tears as his team threw in the towel.

Despite his latest comeback, Mayweather said afterwards he was “still retired”.

“It was all about entertainment – we had a lot of fun,” said the American, who beat UFC’s Conor McGregor in a boxing match in August 2017. “They wanted this to happen in Japan, so I said ‘why not?'”

The fight was delayed by several hours, with rumours circulating on social media that Mayweather might not show up, and that organisers were struggling to locate him.

Then, during an “unscheduled intermission”, he promoted his Las Vegas strip club, urging people to go there to watch the event.

Both fighters were undefeated coming into the widely criticised contest, in which Mayweather had a 4kg (9lb) weight advantage.

Addressing the Japanese fighter, he added: “Hold your head up high.

“I want the fans around the world to support Tenshin, he’s a great guy and a great champion.”

The rules were very strictly defined with kickboxer Nasukawa reportedly facing a $5m fine if he aimed a kick at his older opponent.

There were no judges, with only a knockout or technical knockout considered a victory.

Before the fight, former light-welterweight world champion Amir Khan said the bout was a “joke” and was “hurting boxing”.

Mayweather also came out of retirement last year to beat McGregor in the Irishman’s first ever boxing match.