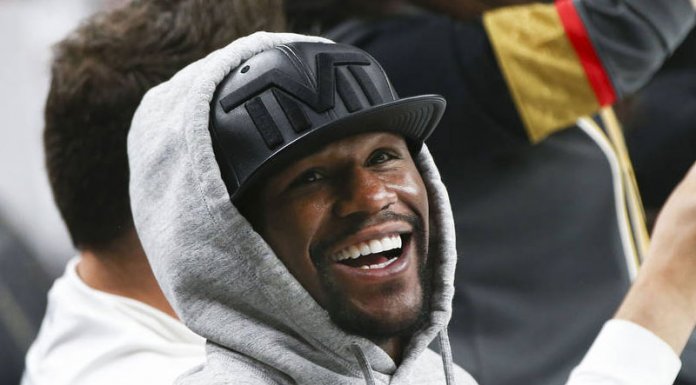 Floyd Mayweather’s love for money is hardly a secret and he has now shown off his latest earnings on social media.

The American shared videos of his huge bundles of Japanese Yen after earning $9million dollars for his win over kickboxer Tenshin Nasukawa in an exhibition match in Tokyo.

Mayweather followed up his $100m pay-day against Conor McGregor in August 2017 with another money-spinning victory in just over two minutes against Nasukawa on Monday.

Naturally, there was to be no kicking allowed and after three knockdowns around 120 seconds from the first bell, the 20-year-old saw the contest ended. He was in tears and Mayweather was left grinning at his latest money-spinning exhibition.

Never one to hide his wealth and success, Mayweather filmed himself walking around one of his many Rolls Royce vehicles before stopping at the drivers’ side where there was bundles of cash.

The 41-year-old was not in prime shape but he still proved far too strong for Nasukawa, 21 years his junior, in the nine-minute scrap at the Saitama Super Arena just outside Tokyo.

He wore a big smile for much of the first minute as the two fighters felt each other out amid a raucous atmosphere inside the 37,000-seater arena.

But there was little friendliness in his work thereafter as, left and right hooks sent the younger, smaller and lighter man down and across the canvas.

Nasukawa is a kick-boxer by trade but against Mayweather on the outskirts of Tokyo he was banned from using his feet over the three rounds of exhibition action.

And when it came down to a battle of fists, there was little by way of a contest. First, a left hand sent Nasukawa to the floor before a right hand to the body was followed by one to the head, and the Japanese fighter was left in a heap in the corner.

When the action resumed, a left hook sent him flying across the ring once more before the towel came in.

The Japanese fighter had previously won all 32 of his combat sports contests, and Mayweather stressed: ‘We are both still undefeated, I did this to entertain the fans in Japan, they wanted this to happen and I said why not, Tenshin is still a great champion, I am still retired.

‘Tenshin hold your head up high, I want the fans to support him, he’s a great guy, a great fighter and great champion.’