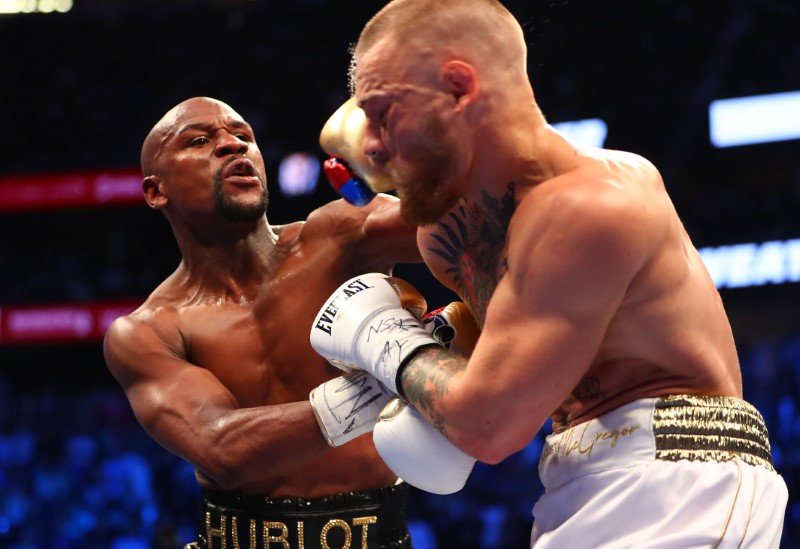 The undefeated Floyd Mayweather had a 10th round technical knockout over mixed martial arts champion Conor McGregor on Sunday morning, the American cementing his legacy as an all-time boxing great with his 50th win in as many fights.

Mayweather, who had guaranteed an early finish to the 12 round contest, made good on his promise when he pinned a brave-but-limited McGregor on the ropes and mercilessly hammered the Irishman before referee Robert Byrd stepped in to halt the bout.

The fight, which Mayweather insisted would be his last, sends the 40-year-old into his second retirement with an unblemished 50-0 record to surpass heavyweight legend Rocky Marciano’s 49-0 mark for most wins without a loss or draw.

”Conor you are a hell of a champion.

“A win is a win, no matter how you get it. Rocky Marciano is a legend and I look forward to going into the Hall of Fame one day.”

Whether the fight will be the richest of all-time as promoters had predicted will be decided later when pay-per-view numbers come in, but it certainly will not be included on any list of the great bouts in boxing.

On paper it would be hard to find a bigger mismatch, but it did not prevent millions around the globe from reaching for their wallets to purchase a pay-per-view package or the 14,623 spectators at T-Mobile Arena to part with big money for tickets.

In the end, the fight proved to be the one-sided contest many had predicted as Mayweather shook off the rust of two years of inactivity against an outclassed double UFC champion making his professional boxing debut.

For months, the charismatic McGregor had boasted he would knock out Mayweather and his legions of loyal fans believed every word of a man capable of backing his supreme self-confidence with devastating power inside the octagon.

However, McGregor’s lack of ring savvy quickly exposed him as Mayweather clinically dissected the 29-year-old, who was soon reverting to his mixed martial arts roots — clutching, grabbing and hitting his opponent repeatedly on the back of the head.

McGregor did come out full of fury and menace but Mayweather, long regarded as one of the finest defensive fighters in history, left few openings as he used the first three rounds to feel out his opponent.

Once he had studied McGregor’s technique, Mayweather took complete control of the contest by the fourth round and started to land blow after blow on his easy target as the Irishman bravely battled on.

The American’s domination was complete by the 10th round as he moved in for the kill to record his first early finish since he stopped Victor Ortiz in a controversial fashion almost six years ago.

“I thought it was close,” a defiant McGregor argued. “I thought I had him in the early rounds. I thought he was getting me in the middle toward the end.

“But where was the final two rounds? Let me wobble back to me corner. Let me try and re-compose myself. You’ve got to put me out.

“I thought it was a little early of a stoppage. I get like that when I am tired. I get a little wobbly and flowy. But you got to give it to him, that’s what 50 pro fights will give you.”

SEE ALSO: IBRAHIMOVIC WILL BE THE “EXTRA MAN” FOR MANCHESTER UNITED – MOURINHO