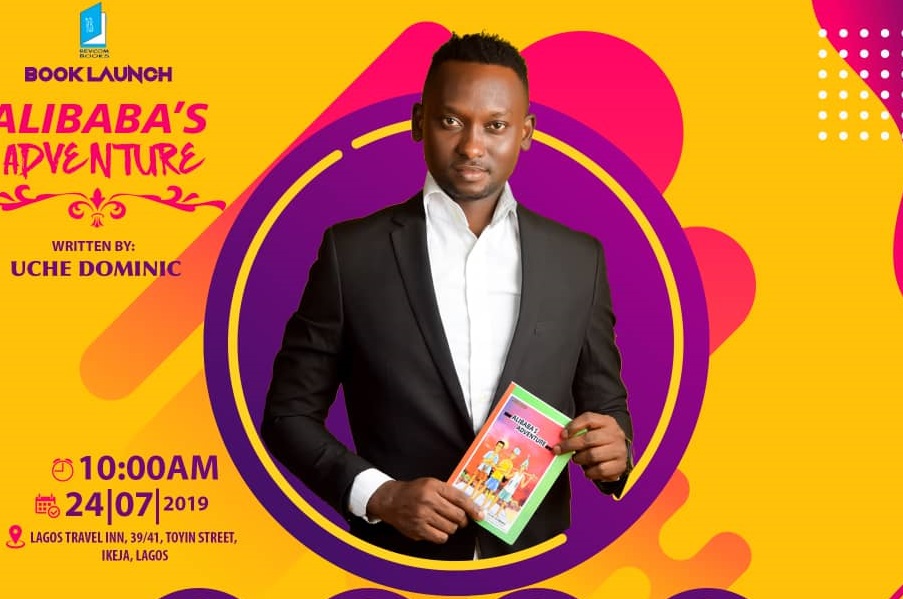 Uche Dominic, a media personnel and writer has recently launched his sixth book titled Alibaba’s Adventure at Lagos travel inn hotel, Lagos.
He has authored six children Novels which includes black sheep, a life of runs, a novel which mirrors the dangers of cybercrimes and other social vices.

One of his books The Reward of Honesty deals with taking a stand for the truth regardless of its consequences.

Another of his scholarly works Little Mariah is based on a true life story on child Abuse and has been read by over 60,000 kids in over 300 schools.
The luncheon was anchored by Mc Shakara and Mc Relax and they both gave the audience comic relief at intervals.

Dominic stated that his sojourn into writing started while growing up with his father who punished him to read newspapers every day and that has helped build his vocabulary and writing skills.

“I just wanted my pictures to be at the back of a book when I started writing, but today I am happy at the great impact my books have made. Your support for me today is support for Education and support for the future. Thisday, I present to you my sixth book “Alibabas Adventure”. This book is a literary piece that explores the life of a young boy who loves to seek adventure, the many challenges he faced ,how he got into many troubles and the aftermath of his adventure.

The book was dedicated to the Lagos state Commissioner of Police, Zubairu Muazu, who delivered a speech where he commended the Author saying he has chosen the noblest path.
He said the home is the first learning Centre for any child and if good reading habit is cultivated, it would help solve a lot of challenges as ignorance would not be an excuse.

”In Nigeria today, we have a lot of issues surrounding cultism, killings, rape and other terrible societal issues and it is surprising how we got to this level. In our days the parent synergizes with teachers to give children the best training but the reverse is the case today.

We have parent fighting teachers for correcting or disciplining the children and that is why we are where we are today”.

He employed parents to buy books like “ALIBABAS ADVENTURE” to know what it takes to train a child and the areas that they have been failing as it will also help the children to become responsible adult in the society.

Chief Tony Okoroji, the president of COSON and CEO of Top Nigeria Limited was the father of the day and he spoke about how he met Uche and how he has been able to stand out in the Edutainment industry.

He applauded his effort towards improving the reading culture of youths from a very tender age and stressed the fact that writing books is building legacies that will transcend generations even when the author is no more.

Hon. Shina Abiola Peter, member of the federal House of representative, who was the chairman of the occasion wrote the foreword Professor Yusuf Dankofa, Deputy Dean Faculty of Law, Ahmadu Bello University, Zaria wrote the preface.

Musical Artiste Harrysong , was present at the launching and he gave his remarks concerning the book , he revealed how children novels helped him to see into the future.

He added that reading books at tender age gave him an idea of what he really wanted to do which is music. He mentioned books give creative thinking that solves societal problems.

Mr Ayo Animashaun, CEO Smooth production and Executive producer of HIPTV said that Uche Dominic deserves some accolade with his interest and effort towards nation building.

He is of the opinion that reading culture should be encouraged at a tender age so that the future of Nigeria can be great and information oriented.
Uche Dominic who has featured in television series like “Roses and thorns”, “Duty free”, “together”, “Tinsel”, “So Wrong So Right” is not resting on his oars .

He stated that his next writing is mirroring the prison life and according to him it is a huge project. He promise to continually write books that would enhance nation building and positively impact children, adults and the society at large.