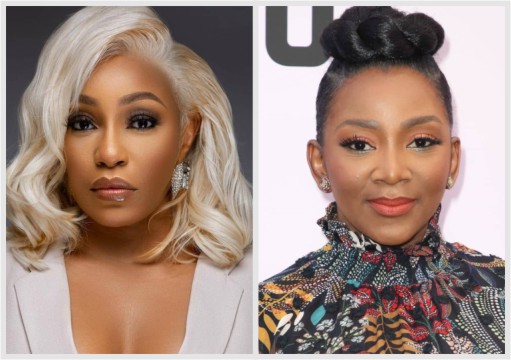 Talented, Pretty and super smart. These celebrities are some of the brightest stars in different sectors of society. In addition to these attributes, they are also single and some are searching. Some are single mothers who are still giving the single ones run for their money.

From ageless beauties to super-gorgeous, these actresses, singers, OAPs, celebrity babes, beauty queen, models; all have some things in common they are all pretty but single. This week, we bring you the drop-dead gorgeous singles in all these sectors.

Nancy Isime is one of the hottest OAPs and actresses. This babe is every man’s dream. As a model, she has worked with Ade Bakere, Adebayo Jones, Zizi Cardow, Shakara Couture and others. Beverly Naya is beautiful from whatever angle you look at her, the British-Nigerian actress is one of Nollywood’s best. She was the winner of the Most Promising Talent Award at 2010 Best of Nollywood Awards. Actress, former model, and businesswoman, Chika Ike has remained coy about her relationship status since she filed for divorce due to domestic violence in 2013. She is one of the hottest single babes we have now.

Rita Dominic is one of Nigeria’s few screen goddesses. She is a superstar and one of the most beautiful women in Nollywood. She’s succeeded in keeping her private affairs away from the media. Talented singer, songwriter and actress, Seyi Shay used to be very private but she is more in the open right now and ready for marriage as once revealed.

Bimbo Akintola is certainly one of Nollywood’s most eligible bachelorettes. Bimbo is one of Nigeria’s long-standing movie stars whose career has cut across the stage, Nollywood and the Yoruba movie industry. Singer, philanthropist and mother of one, Waje is one lady who is gorgeous inside out. She has one of the best voices around. Her vocals helped to power hits like ‘Do me’ from the defunct PSquare and M.!’s ‘One Naira’. Popular actress and mother of one, Genevieve Nnaji popularly called Genny is the Nollywood crush of thousands of men and she is stylishly still single! So, she is also certainly one of Nollywood’s most eligible bachelorettes.

Since Tiwa Savage’s very public break-up with Tunji “Tee Billz” Balogun, Tiwa has kept her relationships under wraps, although she was linked with Wizkid at a time but all was all rumour. She is one of the hot babes right now. Artist and mother of one, Kate Henshaw has a lot going on for her. She also happens to be one of the most beautiful and keep-fit ladies in Nollywood. She has been single since 2011 when she split from her ex-husband, Rod Nuttal. Ini Edo tends to keep her love life out of the public eye but has been single since her split with ex-hubby, Philip Ehiagwina.

Actress, model, television personality, Ebube Nwagbo has been around for a while. The beautiful actress remains one of Nollywood’s singles. She was once linked to music star, KC.

Everyone’s darling and reality TV star, Bisola Aiyeola is one of the most hard-working artistes around. She sings, acts and presents. She was the first runner-up of Big Brother Naija and won the AMVCA Trailblazer Award at the 2018 Africa Magic Viewers Choice Awards. Bisola is a beautiful soul with a personality that keeps her fan base growing by the day. She is, however, still single. Nigerian singer and songwriter, Niyola born Eniola Akinbo but known more by her stage name, Niyola, the single, pretty singer and songwriter has not been quite active in recent years.

Chubby actress, Eniola is quite a vibrant and talented actress. Ever since she was launched into our consciousness by her role in Funke Akindele’s flick ‘Omo Ghetto’, she has grown into one of the biggest stars in Nollywood. She is single. Yemi Alade the sexy, smart and highly talented singer is also single.

The tall, leggy, and beautiful actress, Rukky, who’s rumored to have dated one of the US’ biggest music acts, is single. Munachi Abi, Who wouldn’t know her? The ex-beauty queen is everything rolled into one: she’s an actress, rapper, singer, hip hop artist, model and songwriter. Gorgeous and smart, she’s a past winner of the Most Beautiful Girl in Nigeria pageant. Sultry singer, Chindima is still doing her thing despite not giving us a hit in recent times. One-time winner of Project Fame and established artiste, Chindima is pretty and very well talented. She has not been officially seen or linked with anyone in recent times.

Actress and media personality Sharon Ooja is best recognized for her role as Tiwa’s sister Shalewa in the Ndani TV series Skinny Girl in Transit. She simply lights up the screen – from web series to movies. She’s also quite the stunner. That electrifying body and sexy face — just stunning! She’s just one of those hot ladies you really want to hate on, but simply can’t because she’s so damn gorgeous and genuine. British-born Nigerian actress Beverly Naya has been on the Nollywood scene for some time now, but we simply cannot get over her! The ‘Suru L’ere’ and ‘The Wedding Party’ star has something about her that screams Melanin Magic. She is a head-turner, but her acting skills are what has put her career on wheels. She also has a knack for showing impeccable style on the red carpet

Model, actress and TV personality, Zainab Balogun is a combination of raw charisma and talent that is impossible to ignore or deny. One of the most attractive ladies in the business, there is something about the young celebrity that keeps the camera rolling. From her style to her flawless and youthful looks, it feels as though the star can do no wrong. Who hasn’t been guilty of drooling over her really? We’d give our right arm to go on a date with this hottie.

There’s no denying the fact that Ini Dima-Okojie is just hot all-around. Her face, her body, the way she walks- talk about a bombshell! The actress who dumped the corporate world to pursue her passion for the arts has since appeared and done fantastically well in a number of interesting projects in Nollywood, including ‘On the Real’ on Ebony Life TV and ‘Battleground’ on African Magic. We have hope that this enchanting female will continue to pick great roles that she plays so effortlessly.

Actress, model and media personality, Nancy Isime has an irresistible appearance. Besides being known as the presenter of the popular show Trending on HipTV, she has appeared in several movies and TV Shows, including Ebony Life TV’s reality series “On the Real’. She seems to be on a one-way track to success. Her variety in acting and smoking hot body makes Nancy a rising hot star that men won’t be taking their eyes off of anytime soon.

One thing is clear: Dimma Umeh’s beauty tips work. The fresh-faced beauty vlogger is indeed one to get your attention. She is a really beautiful woman; and it’s not because of the amount of make-up on her face either. Behind the powder and blush, she has a strikingly pretty face and a great body. She also has a delightful personality too which has led her to have a great fan following. Look at her! She certainly deserves a spot on our list.

Delphine Okobah is a model, graphics designer, and film and TV enthusiast. She won Miss Amity in the 2011 Most Beautiful Girl in Nigeria beauty pageant. More recently, she has delved into the world of vlogging about Nollywood movies. The YouTuber who refers to herself as a “multi-layered media mogul” is a complete babe. She has been in the game of looking cute and getting Internet attention, for her points of view on film and television content. She always entertains her fans and audience at her best. Her charm stems from her lilt and mega-watt smile and of course, being a strikingly-attractive, tall lady with a super attractive body helps.

Lilian Afegbai is a triple threat; Reality Star, Actor, and award-winning Producer. The Edo State indigene is arguably Africa’s youngest female producer to win an AMVCA. She is very much single. Toyin Lawani is the celebrity designer behind the Tiannahs brand. She has been linked with few guys, despite being a single mother, she is still hot and single.

The likes of Oge Okoye, Mercy Aigbe, Iyabo Ojo, Bisi Ibidapo Obe, Adediwira Gold, Olaitan Sugar, Temitope Aruga, Oyebade Adebimpe have been in the industry for a while but they are still very single and hot.

On this list are also beauty queens like Omowunmi Akinifesi, Sylvia Nduka, Anna Banner whose reign were well celebrated and ever since they won the crown, they have been in hot demand.

What of Music Director, Kemi Adetiba? She is one of the beautiful single ladies making waves. So also are the On-air personalities such as Venita Akpofure, Kayla Oniwo, popular female comedienne Chigurl, TV personality, Layole Oyatogun, Fade Ogunro, Osas Ighodaro, Movie Stars like Bolanle Olukanni, Zainab Balogun and many others.