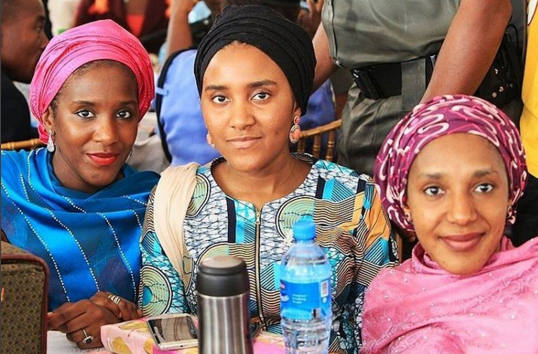 Most people know many thing about the African richest man, Alhaji Aliko Dangote, but not many know much about his private life or who his children are. Well, according to findings, the reason is that he likes keeping his life private as possible.

But penultimate weekend, one part of his private life was celebrated by many as one of his 3 pretty daughters; Fatima Aliko Dangote, wedded in grand style. The beautiful bride tied the nuptial knot with his long time beau, Jamil Abubakar, amid pomp and pageantry in the commercial city of Kano. The event lasted over 5-days as Kaduna and Abuja also played host to A-list celebrities from Nigeria and entire African countries.

Many, who have wondered who are the children of Aliko Dangotes opportune to see his pretty look-alike 3-daughters. Yes, African richest man, Africa Aliko Dangote, is blessed with 3 successful daughters.

The question that then come to mind was what do they do? Are they arrogant? Well, let’s tell you that if you’re thinking such lucky girls would be arrogant and pompous, then you need to think again. They are not the regular rich kids you see around. They don’t wear their father fortune on the sleeves. Even those who have met them have one or two positive things things to say about them. The only thing that makes you know that they are Dangote’s daughter is the huge resemblance they share with him. Yes, if they had been boys, you would have mistaken them for Dangote’s younger brothers.

They all made head turned at their sister’s wedding. They were led by the eldest daughter, Halimat Bello. Halimat and Mariya dazzled in unique special burgundy colour Komole from Deola Seago at the Kano Nikkai dinner. Their attire was a green special gown for the Abuja dinner. They were full of smile as they came with their large guests to the wedding of their sister, Fatimo.

Despite being a billionaire and a business mogul, Aliko Dangote’s daughters. Halima Bello (the eldest daughter) and Mariya Dangote have no air around them for many days that the event lasted. People didn’t expect anything short of their normal behaviour. They are to be down-to-earth and courteous not minding their father’s wealth.

Halima is a graduate of Marketing from the American Intercontinental University, London, and Webster Business School, London. She raised the bar at Webster Business School, London immediately after her first degree to obtain Master’s of Business Administration. She is also married to Kano-based Sulaiman Sani Bello and they have two beautiful daughters. She is a strategist with Dangote Group of Companies.

Mariya is also one of the pretty daughters of Dangote. In April, 2015, Mariya Dangote received a Master’s degree from the Coventry University and has ever since been in close relationship with her father. Despite her rich background, Mariya is calm and would not be found in social gatherings as she prefers to keep a low profile. Although, she has her chains of friends, but you hardly see her posting photographs on instagram or face book.

Fatima Dangote, the bride who is now married to Jamil Abubakar, is into confectioneries, and she sits atop the Cupcake Factory. Fatima Aliko Dangote’s passion for baking made her started her business, The Cupcake Factory is located in Lagos.
Let’s tell you what Halimat, Fatima and Mariya have in common aside the huge resemblance they share with their father. They are gorgeous young ladies, who studied and graduated from the best universities in the United Kingdom. They are highly religious and never joke with their faith.