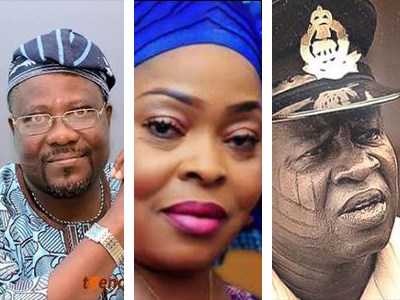 Ibadan, the capital city of Oyo State, has a place in the history of the movie industry in Nigeria. It won’t be out of place to say that Ibadan was the first biggest platform for acting and drama. It was a city where most prominent actors/playwrights started their careers. Among them are veteran actor and Ifa priest, Peter Fatomilola and Prof. Wole Soyinka, the late Adebayo Faleti, Prof. Akinwumi Ishola, late Duro Ladipo, Hubert Ogunde, Ojo Ladipo, and many others. A city that houses the first television house in Africa, the Western Nigeria Television Station, Ibadan also boasts the first the university in Nigeria (U.I), Skyscraper (Cocoa House) and many other firsts in the country.

Now, the story has not really changed, as Ibadan still has a good number of actors and actresses who are doing wonderfully well in the industry. They are not just actors but award-winning actors with a track record. are aging, while there is a new generation of young actors and actresses in Ibadan. Most of them are movie producers too.

Even as old as Chief Lere Paimo (aka Eda Onileola) is, his contributions to the Yoruba movie industry is great. He has acted in many movies and produced several ones including the epic ‘Ogbori Elemosho’.  He is a traditional title holder, Aare Arobabojo of Ogbomosholand. Chief Lere Paimo has won several local and international awards. He was part of the team that won a gold medal with the presentation of the Yoruba traditional movie, “Oba Koso” during the Commonwealth festival in 1963.

Aderupoko has he is popularly known as a comic actor, who has over 50 years acting career under his belt. He started out alongside Papalolo and Jacob with the stage name ‘Jesters International’. Today, Aderupoko has become a household name in the movie industry. He acted in Baba Wande’s popular ‘Ti Oluwanile’. He has also recorded several other a appearances in Kunle Afolayan’s October 1st’ and Funke Akindele’s ‘Jenifa’. He is a recipient of City People’s recognition award.

Baba Aribagbuwo is one of those who have been acting since the days of celluloid movies. He is a veteran a well-known name in the industry.

Tola Oladokun (a.k.a Ika lomo ejo) is a veteran actress and she is unarguably a seasoned actress who has so many things working for her in the industry.

Dele Odule, the President of the Theatre Arts and Movie Practitioners Association of Nigeria (TAMPAN), is an actor and film producer. He acted king in Baba Wande’s ‘T’ oluwanile’. The Oru Ijebu-born actor has also acted in the popular Yoruba movie, ‘Lakunle Alagbe’ and has produced several others too.

Baba Tunbosun Odunsi is one of the veteran Nollywood Stars, who has rocked the entertainment industry for more than 50 years. He is not just popular on TV today, he had been popular when he started acting alongside the late Hubert Ogunde in the 50’s. He is popularly known for acting emotional roles in movies.

Sunday Omobolanle aka Papi Luwe, MON is a Nigerian comic actor, playwright, film director, and producer. He has featured in several movies like ‘Adun Ewuro’, ‘Konkobilo’, ‘Oba Alatise’ and many other. He is married to a popular actress, Peju Omobolanle nee Ogunmola.

Bobo B as he is popularly called in the movie industry has been playing prominent roles at the different flicks. He is a former President of ANTP in Oyo state.

‘Ojo Pagogo’, as the veteran Nollywood award-winning actor, director and filmmaker is called Rasaq Olasunkanmi Olayiwola is popular and has been around for a while. He is also a musician. He dropped has dropped singles. He is also a person who has several soundtracks in movies. He was born on September 30 and hails from lseyin, Oyo state. He got his stage name, Ojopagogo, during a stage play entitled, “Ola Abata” in 1986.

She began her acting career in 1993 and since then there is no stopping for her. She worked briefly at Ascoline Nigeria Limited, a Dutch Consultant Company, before her appearance first movie entitled ‘Onomek and her debut Yoruba movie was ‘Owo Blow’. Over the years, she has featured in notable Nigerian films such as Sango, a movie scripted by Wale Ogunyemi, produced and directed by Obafemi Lasode and Wale Adenuga’s television series, Super story and many more.

Toyin Adegbola popularly known as ‘Toyin Asewo To Re Mecca’ is an actress, producer, and director. She began her acting career in 1984 in the Yoruba film sector. She is a former member of the board of the Osun State Arts and Culture Council.

Peju Ogunmola is a Yoruba film actress. Her father was a veteran actor, Kola Ogunmola. She is the wife of Sunday Omobolanle, a veteran comic actor, playwright, film Director, and Producer.

Moji Afolayan is an actress, film-maker, producer and director. She is from the popular ‘Ade Love’ family. She is married to another popular actor, Rasak Olayiwola (Ojopagogo). Her brothers, Kunle and Gabriel Afolayan are big actors in the industry too.

Give it to Londoner as Muyiwa Adegoke is popularly known, he is a talented actor. He has featured in several movies including ‘Idamu Akoto’, ‘Òréré layé’, ‘Ile Oko’ and many others.

Antar Laniyan perfectly acts in both English and Yoruba movies. He began his acting career in 1981 and the first major role he played as a professional actor was a “Major General” in a film entitled: ‘Everybody Want To Know’, during his days at the Kakaki Art Squad. He has featured in several films including Sango, a film scripted by Wale Ogunyemi and produced by Obafemi Lasode. He was the director of the first episode of Super Story, the award-winning Nigerian soap opera produced by Wale Adenuga in the year 2000. He also directed ‘Oh Father Oh Daughter’ and ‘This Life’ produced from the stable of Wale Adenuga Production.

Odika started her acting career years back appearing in some soaps on the then T.S.O.S (Television Service of Oyo State). She, however, got the break in the movie industry from Prince Wemimo Olu Paul’s production ‘Ododo Eye’ in 1993. She is now the Governor of the Oyo State Chapter of TAMPAN.

Muyiwa Ademola is an actor, film-maker, film producer and director. He is not only an actor, he has a performing act school, through which he trains many upcoming actors and actresses in the industry. In 2005, his film ORI (Fate) won the best indigenous film at the maiden edition of Africa Movie Academy Awards (AMAA). He has featured in many films and has produced or directed several others.

He is a lawyer-turned film actor. He is also a  Director and Producer. He was a former Special Adviser to the Governor of Kwara State on Arts, Culture and Tourism. He began acting in 1985, the same year he featured in his father, Adebayo Salami’s first movie entitled. Ogun Ajaye. He has starred in several films, winning four awards as Best Yoruba actor at the 17th African Film Awards popularly known as Afro Hollywood awards at the Stratford Town Hall in London. He also won an award in the same category for the Best of Nollywood Broadcasting Organization of Nigeria Awards in 2012.

She is an actress and producer who has worked on many movies. She is the producer of the popular ‘Iya Ila’ movie. She also runs a beauty store in Ibadan.

Bose Akinola is an actress and a producer with both national and international recognition. She has produced several movies which include ‘FERANMI’, ‘IYAWO OLORIN’, ‘LOOGUN OFE’, ‘IDAJO OWO’ and many others.

The controversial actress, Tamilore Martins-Ojo, is one of those beautiful babes rocking the movie industry.

He is popularly known as Piccolo. He is an actor, scriptwriter, producer and film director. He has produced movies like ‘Alade Vendor’, ‘Dokita Kunle’, ‘Aje Imule’and several others. Before joining the movie industry, he has served as an honourable Councillor in Oyo East Local Government.

She is a comic actress. ‘Iya Ibadan’ as Rukayat Lawal is popularly known, surely knows her onions when it comes to acting. She has acted alongside powerful names in the industry.

Mosuru as the popular comic actor is widely known is the big act in the movie industry right now. His acting skill has taken him places. He is also into business; he runs a block industry around Elebu area of Ibadan and we learnt he is into other businesses.

Though, Baba Tee as he is fondly called started out in the English sector of the Nollywwod before crossing over to the Yoruba genre.  He made his Nollywood debut in a movie entitled: “14th of February”, written and produced by Paul Obasele in 2002. He is not only an actor, he is also an M.C and events host.

Sola Popoola is an Ibadan-based fast-rising star in the Yoruba movie industry. Sola Popoola is not just an actor; she is a stakeholder. She is the Public Relation Secretary of the Theatre Arts & Movie Practitioners Association of Nigeria (TAMPAN), Oyo State chapter. She has to her credit movies like ‘Ayowamiri’, ‘Sangbajale’, ’Ramoni’, ‘Toyobo’, ’Egbaorun’ and ’Obe’.

Besides those mentioned above, there are also many upcoming ones who are doing very well in the industry. They include Charity Adeniyi, John Odika, Asiwaju Omobolaji, Sunkanmi Dada, Victoria Ajibola and many others in Ibadan.