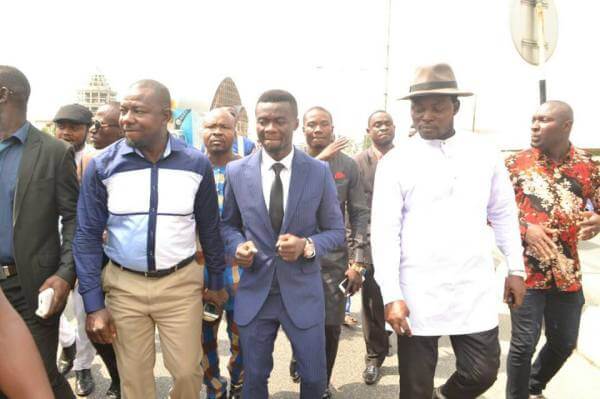 He is 33 years of age and was born 27th May 1984, and a student of political science from Imo State University.

The Jubilation began after the screening of the commissioner nominee by the Bayelsa State House of Assembly.

Ibarakumo Otobo would be the youngest man to serve in the Bayelsa State Executive council.

He is also the Chairman of Bayelsa state volunteers, a youth network set up by the government to provide employment opportunities for the teeming youths

Otobo, however is not the youngest commissioner to ever be appointed in any state in Nigeria. In the year 2015, the governor of Cross River state, Governor Benedict Ayade appointed a young man Asuquo Ekpenyong as the state’s Commissioner for Finance. He as 30 years at that time.

Despite a few eyebrows being raised following his appointment, his experience at home and abroad alongside his accomplishments give no room to doubt his preparedness for the office he was appointed for then. And the young man eventually proved his worth.

Asuquo was born September 25th, 1985 and he attended King’s College Yaba, Lagos, where he obtained his West African Examination Certificate before proceeding to study Economics in the United Kingdom. Though Asuquo played an integral role in Governor Benedict Ayade’s campaign team, he never had a prior political record before his appointment as Commissioner in the state.

In another case, a 30-year-old young man named Mark Okoye was appointed as Anambra state Commissioner for Economic Planning and Budget Development, by Governor Willie Obiano in June 201