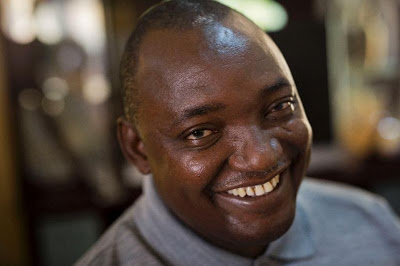 Adamma Barrow may have one problem- the defeated Yahya Jammeh (who at press time was still clinging on to power) to deal with- but his love life certainly isn’t one.

The new President of the tiny West African country The Gambian was sworn in Senegal as Yahya Jammeh who has ruled the nation for 23 years did not vacate office.

Stealing the show was the were of the 51 year old Barrow, Fatou and Sarjo. Both women were looking quite happy with their new status as the co-First Ladies of the Gambia. The gleaming smiles hid the pain of the death of Sarjo’s son Habibu who died after being beaten by a dog last week.

While most African leaders are known polygamists, most of them have an official first lady who is introduced as such for the duration of the president’s term. However, Mr Barrow seems to have no qualms about showing off the two beautiful women in his life.

Oga Adamma, na man you be!