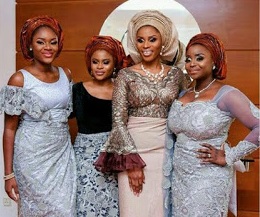 The Lagos wedding of the children of 2 popular and influential families,Sijuwades and Folawiyos was one that can not be forgotten in a hurry due to all the classy details and how superlative it was which totally lockdown Victoria Island few weeks back.The party had many dignitaries in attendance,from politicians  to businessmen,corporate individuals,first class monarchs,celebrity kids and most especially society women who trooped in to celebrate the couple and honour their parents.Amongst those that looked elegantly beautiful were the brides sisters,they looked beautiful in their choice of silver tulle lace sewn into different styles,They were up and doing at the wedding.The first on the list is Toyosi Folawiyo,the first child and daughter of the Late Baba Adinni of Nigeria.Though she is a grandmother but she still look her elegant self at the wedding,decked in a gold outfit with peach headgear,she was among her family and also sat conspicuously on the front row as one of the children who calls the shot. The highly respected society lady, whose son, Abiola Johnson, got married sometimes back recently moved to her  mansion in Banana Island, Ikoyi. 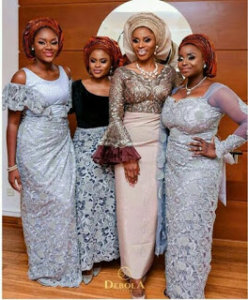 Toyosi, who is revered for her no-nonsense nature, calls the shots within the Folawiyo family. She is particularly close to all her younger siblings, who love and adore her to bits. Some of Baba Adinni’s widows, notably, Chief Bolatito Folawiyo and Sisi Abah Folawiyo and Shola Alaba  Folawiyo are also fond of her. In her early 60’s, Sisi Toyosi, as she is fondly called holds the revered title of Iyalaje of Lagos, and she is regarded as a very wealthy businesswoman. She is the estranged wife of Chief Abiola Johnson, the Apesin of Lagos and the son of Nigeria’s First Republic Minister of Internal Affairs, Labour and Social Welfare, Chief J. Modupe Johnson (J. M. J.) Abiola Johnson was also a Commissioner for Transportation in Lagos State whence he introduced the M. O. T. Test for vehicles in Lagos State, and later served as Commissioner for Commerce & Industry, under Asiwaju Bola Tinubu.

Since her separation from her husband, Toyosi Johnson has been investing a lot of time into taking care of her grandchildren, Her marriage produced 4 beautiful children,  Tilewa, Abiola, Modupe and Tola, who are all chartered accountants, and many grandchildren.

She has other sisters who are more like her daughters because she is a grandmother and she equally played a grandmothers role as well at the wedding. She was also at the fore front of all the plans. Aminah Folawiyo is one of the pretty daughters of Chief Wahab Folawiyo. She had a superlative wedding on the island a year ago which was very grand.She married an equally Lagos big boy,Akinpelu Joseph. Motunde Folawiyo is another pretty girl who is doing well.she was the event planner at her sister, Olabisi’s wedding.She made sure all went well and guest had enough.She runs a thriving events management company,Amber madisson events which specializes in managing,coordinating and planning of events.She has handled many A list events,she was also the planner at her sister, Aminah’s wedding.The latest bride of the Folawiyo’s family is Olabisi who had one of the most talked about wedding in Lagos few weeks back.She married Late Ooni of Ife’s Sijuwade’s son,Aderemi. Olabisi Ashake is the daughter of Madam Olushola Alaba Folawiyo. She was working as an investment banker when she moved back to Nigeria but make-up is what she has been doing since her days at the university, almost 10 years ago. She attended two different make-up schools in London and New York, Academy of Freelance Make-up in London, and New York.She is an Island big babe whose friend all rallied round her and made her day a success.On the list is also Mowale. She is young and pretty and doing very well in her private business.