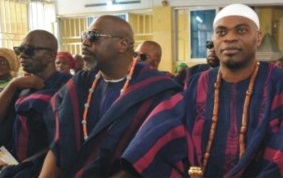 The Akinsiku of Lagos, Oba Olalekan Dosunmu comes from a very illustrious Lagos family, the Dosunmu family of Lagos Island. He is highly revered among the true sons of Lagos. He is not the only son of his parents as he has 6 brothers, who are equally big in all ramifications and are doing well in their respective fields.

Their late father and mother were:  Pa Albert Olaribigbe Adisa Dosunmu and Florence Alaba Aduke Dosunmu from the Obun Eko Circuit on Lagos Island. Their father was  the elder of Awe Adamu Orisa cult, the most senior Eyo group in Lagos. No wonder, his son was conferred with the title of the Akinsiku of Lagos, the custodian of Eyo by Oba Rilwan Akiolu. Penultimate Friday, children of the late Albert gave their father a befitting burial in Lagos, which had over 3,000 guests in attendance. It was a party   many guests looked ahead for and on the D-day, family members and friends from all   walks of life gathered to pay their last respect to the late Albert Dosunmu.

All the Dosunmu brothers were up and doing at the event. The deceased had 7 sons and 2 daughters. The daughters are: Princess Olaide Jemil, who is a business woman on Lagos Island. She deals in wedding gowns and Princess Olaitan Dosunmu, who works with Okuobi Medical Centre. All the brothers are: Prince Bolaji Dosunmu, who lives in Canada, he is a system analyst. Prince Lanre Dosunmu is a retired Navy officers, who is into oil and gas. Prince Tunji Dosunmu is a real Estate expert, while Prince Olabode Dosunmu and Prince Adewunmi are both top officials at Lagos Inland Revenue Service, (LIRS) and Prince Segun Dosunmu lives in the US. Most Lagos big boys stepped out at the party to honour all of them.

The bereaved children were led by Akinsiku of Lagos, whom was highly praised by Kwam 1 De Ultimate the official band of the party. All the brothers looked dapper both at the wake, burial ceremony and the reception party. They wore the pink/royal blue mixed aso oke and changed to the Ankara aso ebi later for the reception. They were well sprayed with naira during the dancing session by all the big boys who came for the   party.