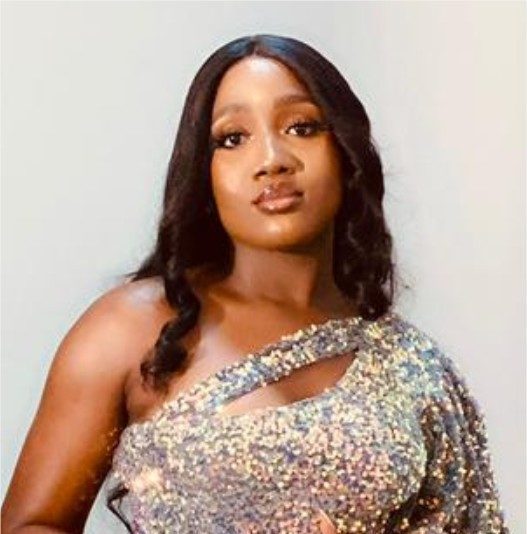 •What SAFFIYA Told City People About Her Life & Career

Her name is Adekunle Oyindamola Shefiat. But, she would appreciate to be referred to with her stage name, Saffiya. Saffiya is a Rhythm and Blues and Hip-Hop artiste.  And, wait for this: she is one of the daughters of Fuji music star, Alhaji (Dr.) Sefiu Alao Adekunle better known as Baba Oko and Agbara Orin. Saffiya who graduated from Babcock University is so immersed in her music so much that, if you try to pull her out of it, she would keep dripping of lovely lyrics till she gets back into her groove in music. She is passionate about singing. So, Saffiya was a guest at the headquarters of City People Magazine in Lagos State recently, and she was engaged in a no-holds-barred interview by the Publisher, SEYE KEHINDE and Reporter, SAHEED OJUBANIRE. She spoke in immaculate English, about her music, the inspiration behind it, education, her father, her late mum, and some other related issues. Read on please, it is very interesting:

Let’s start by asking you to share with us how your experience has been in music. Like how many years have you been doing music?

I have been into music since when I was young. You know, when I was in school I would go for music competitions. Whenever it had to do with music, I would always represent the school, one way, or the other. So, I have always had exposure concerning music ever since I was young. But, I started recording like going to the studio when I was in the 200 level. So, over time, I just get to the studio, record more songs, discover more of my sound, and stuffs that I can do. And, that is really what I have been doing so far; recording and you know, getting to understand music better, and express myself better.

So, how has your dad been an artiste affected your own love for music?

Being born by my dad and watching his love for music; I see that we have so much in common. You know, I see how much he puts into the music. He is the happiest when he is doing music. And, as someone who was born into a family of a musician; music has been what has actually been sponsoring my entire life. So, it has been fun to watch him, and my dad sings a lot, he sings to us, he sings everywhere. He is just so happy when he is singing. And I see that it is so nice to pick something that you love so much and make it your profession. Because then it doesn’t necessarily feel like work. You can enjoy the work, and that is the leverage that is very important. And, that is something I took from my dad which I think is very important.

I think it is the fact that he speaks his truth. He is never really afraid to say anything. I feel like, the best part about music is the fact that you can express yourself, whatever it is you are feeling, without being afraid of what you are saying, or if people would accept it. And, that is one thing he has always done.

How would you describe your own kind of music?

I do Pop and R and B basically. I grew up listing to all kinds of music, and I ingested all the kinds of music: Hip-Hop, R n B, foreign music, Nigerian music, and I relate with them so much. So, I feel like there is so much that I can do. But, I’m more into R n B stuff and Hip-Hop.

So, how do you also intend to create awareness for your music?

Hmmm, I mean, well with the help of Mr. Ojubanire here, I hope that he can guide me in the whole media path. Because, all I really know about is making music, and that is all I know. Hopefully, as time goes on, I get to learn more and all that.

I was born in Abeokuta, and I also grew up in Abeokuta. All my education was in Ogun State.

When it was time for you to choose a course to study in the university, how did you decide on the course you studied?

Well, I always felt I didn’t want to study music because there is so much music going on around me already and I just wanted a different kind of exposure. I knew I wanted to study something related to the government, something related to law, so I studied International Law and Diplomacy at Babcock University. I finished in June 2019. And after that, I went for my NYSC. I just concluded that.

Where did you serve?

I did my camp in Bauchi State, then I relocated back to Lagos.  So, NYSC was the major moving period to Lagos for me, because all my life, I had been in Ogun State.

You have done some singles already, can you tell us their title and the inspiration behind the songs?

Okay, the most recent song that I released is titled: “Dark Night”. And for me, I like to express myself via music because that is like therapy for me. That is how I’m able to cope with so many situations. And “Dark Night”, literally, just talks about; you know, when life just gets so much sometimes, it is in the night that you realize so many things. Because then you remember yourself, you are thinking about your whole day and your whole life. It is like everything dawns on you. So, that is what the song is talking about. You know, how you remember yourself at night and things begin to dawn on you, and you just want to hold on thinking that tomorrow is going to be a better, and brighter day. So, that is really what the song is talking about. But, I’m definitely putting out more songs to express different things that I think of. Just varieties of music that, different kinds of people can relate to.

Apart from “Dark Night”, which other song have you done?

I released “Stay”; which is like my official first single. “Stay” was just a love song. I felt that love is a general feeling you feel towards your family and anybody. So, I feel most people relate to love songs a lot. And, when I heard the beat that my producer made at the time, I felt like this is a nice beat for a love song, so I just made that love song. And after that, I made this EP with a friend of mine who is also a producer, and we made this 4 song EP titled: “From Lagos With Love”. And after that, I released “Dark Night”. But all these songs, I have never tried to promote them. I just wanted to put more effort into my next single that is coming, and it is titled: “Opinions”. And, I can’t just wait for people to hear it.

At a point in time, you did cover of some popular songs. So, what would you say the covers you did were for? To hone your own singing talent or because of your love for the songs involved?

I started making covers based on my love for music and stuff.  I just wanted to sing all those songs that I liked so much. You know, I would sing around people and the people would say you sound so nice. So, I felt let me just make these videos and post them on my social media. It can help me with exposure. And while I was doing that when I was in school, I knew that I could not pay so much attention to music then, so whatever spare time I had, I did covers and posted them. And most times, I got reposts from the original artistes. I once took part in a competition done by Simi, when she put out her album, and I won it which was encouraging for me. It was so encouraging for me, and I put out the song not because I thought I was going to win, but I did the cover because I really liked the song. I enjoy her music, and when I got acknowledged by her and everything; it was just so encouraging. And it made me feel like I should do more.

What are the other songs you did covers of?

I did covers of so many songs by so many artistes. Like Davido, I did “Fire”; I was doing mostly acapella to their songs, just 1 minute acapella to my favourite part of the song and I would put it on my social media. I did a cover of Rema’s song at a point, and Don Jazzy reposted it on his Instagram handle which gave me some kind of exposure at the time. I did covers of songs from people like Adekunle Gold, and he reposted it as well. So many covers of various artistes. I just listen to the songs, when I like it, even foreign artistes as well; I did foreign covers as well. I would just feel like, I like the music, and I would sing it for as long as I had time for it.

Let’s quickly put you on the spot with this question. You lost your mum some years back, sorry about that. But, do you think she would have supported your going into music if she was still around?

My mum was overly supportive. And, she was a very reasonable person. I feel like if she ever asked me why I want to do music and we sit down to have a proper conversation, she would understand. I know that being a female child, going into music, sometimes it might be hard for you to accept. But, it is important for you to know why one would love to venture into music. And, I feel if she were alive and sees how I am now, and we talked about it, she would understand. And she would definitely want to provide guidelines, and all that would make everything work smoothly. I know I would have had her support.

If you have a choice to do a collaboration with any star artiste in the industry, who would that be? You can give 3 names…

Finally,  what is your message for the music industry, what should they be looking out for?

Oh, my God! There is so much in stock. There is so much I’m able to do with music because I feel like music has always been part of my life. Music is the one thing that makes me stand out. Music is the one thing I’m never doubting myself for. Music is one thing I’m always sure of. And, I have so much to offer. I have so many amazing songs that I’m taking my time to write and record with amazing artistes. And, I just can’t wait for the world to begin to hear the songs. I feel that they are songs that deserved to be heard by a good number of people. I just can’t wait to get discovered by people and have them listen to the amazing songs I have for them.

Let us assure you that, we, in the media, are waiting for you…

(Laughs) Thank you very much for your support.