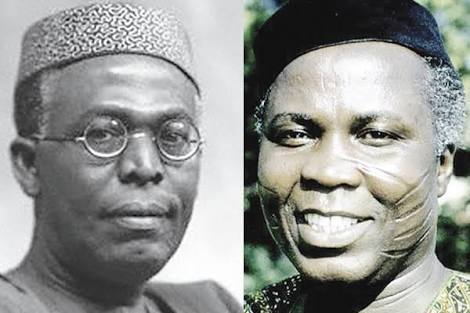 Despite Being Political Rivals In The 60s

Ado, a popular town in Ekiti State was brought to life a few months back when the Vice President, Prof. Yemi Osinbajo and Ekiti Governor, Dr Kayode Fayemi, paid a courtesy visit to a man whose hard work brought him to limelight and made history. The Vice President and the governor visited Pa Olabode Olajide, who was the official driver to past Yoruba political leaders like Chief Obafemi Awolowo, Adesoji Aderemi, Gen. Adeyinka Adebayo and Chief Samuel Ladoke Akintola and many other Nigerians and African Presidents.

He is a man that fate smiled upon and was ably remembered by these 2 eminent personalities who dimmed it fit to visit him and in all compensate him for his good works.

Let us quickly tell you that Vice President Yemi Osinbajo is an inlaw to the Awolowos, hence, the courtesy visit. On VP, Yemi Osinbajos social media page, he  wrote:

“Yesterday, while in Ekiti, I had the privilege of visiting Pa Olajide Olabode and his family. Pa Olabode was the official driver to Chief Obafemi Awolowo, Adesoji Aderemi, Gen. Adeyinka Adebayo & Chief Samuel Ladoke Akintola. Oh what stories he had to tell”. Pa Olajide Olabode’s story is an inspiring one, at 87 with a few years from 90, he is still very agile and lives a moderate life in Ado Ekiti with his wife and children. He was the man who drove two political rivals and still did not bow out of service

It all began when Chief Obafemi Awolowo gave up his post as the Premier of Western Region to seek power as the Prime Minister but lost and settled as the leader of opposition in the federal parliament. Though the premiership mantle was handed over to Akintola but Awolowo still retained his post as the leader of the Action Group. However, Samuel Akintola did not reckon with Awolowo’s decision to remain the leader of the party and this brought about the division of interest and loyalty in the Action Group. A faction of the Action Group pledged loyalty to Awolowo while another supported Samuel Akintola. Despite this tussle, after Akintola took over, Pa Olajide was also still with him despite Awolowo was defeated. Few months back, Pa Olajide spoke about the story of life, what led him to become a driver, how he got the juiciest job to drive many Nigerians and African presidents, his family and life at 87.

“My father was James Olabode and my mother was Olorunfemi Olabode. I was born in Ado Ekiti in December 1932. I attended Emmanuel School, Ado Ekiti, where I passed Standard Six in 1950. After that, my classmates moved to secondary schools, but I could not. My parents tried but they didn’t have the wherewithal to send me to secondary school. As a result, I opted for driving. I thought of what to do. I had to go and learn a vocation. I would have been a bricklayer but I didn’t want to do a dirty job. I wanted to be a tailor but thought of who would buy me a sewing machine. My parents, who could not afford to pay a little amount of money to send me to secondary school, would they be able to afford it? I decided to go for a job that I would be able to buy the equipment needed to do it.

I then chose driving. Only 15 shillings was required to be a professional driver. To rent a vehicle for testing cost 10 shillings and five shillings for learner’s permit and that led me to driving.

I was brilliant in school. My mates became professors, permanent secretaries and important persons. We had good teachers during our time. They were dedicated and pupils were ready to learn, unlike today when pupils depend on mobile phones and go about drinking. There was no light then. On my mind, I thought that after passing, I would join the police and get quick promotion and make it. But J. E. Babatola, who was the principal of Ekiti Divisional Teachers’ Training College then, employed me as the college’s driver. I started there in 1955. In 1957, he contested election and won. I left the college with him to Ibadan, Oyo State.

In Ibadan, he was appointed the Parliamentary Secretary to the late Chief Obafemi Awolowo. That was where I had the opportunity to become the official driver for all the premiers of the Western Region. I decided not to leave the job because I worked with Chief Obafemi Awolowo, Chief Ladoke Akintola and the emergency administration headed by Chief Moses Majekodunmi.

I drove all the important personalities in the country. I drove presidents of African countries that visited Ibadan. I was always in charge of special assignments because they knew that I understood the job and how to make the state proud. I was there until I retired voluntarily in 1977 after 18 years in service when I was to go to Hamburg, Germany, as transport officer for a brewery they wanted to establish in Akure. The then managing director, Mr Faloye, invited me to be the transport manager. That was how I retired voluntarily not knowing that the company would not take off. The former Ondo State Governor, Chief Adekunle Ajasin, came and he scrapped the brewery project.

I didn’t drive only Nigerian important personalities but also African heads of state. They included Kwame Nkrumah of Ghana, Sylvanus Olympio of Togo, Siaka Stevens of Sierra Leone, William Shadrack Tubman of Liberia, Julius Nyerere of Tanzania, and others. I drove all of them that came to Nigeria.I drove Nnamdi Azikiwe, the Governor-General when he came to the West. I drove ex-Head of State, Gen.Yakubu Gowon when he visited the region. I was mindful of protecting my integrity and I respect myself. My name is important to me. In 1999, Ekiti State Governor, Niyi Adebayo, gave me ‘Worker of the Millennium’ award. I was the only person given award in this state in 1999.

Speaking about the journey of his life, Pa Olabode said, “I was the official driver attached to the premier’s office (Western Region). When Chief Obafemi Awolowo was Premier of Western Region, I drove him. After he went to Lagos to become the leader of the opposition, Akintola became Premier; so, I was driving Akintola until 1962 when there was a crisis in the region. I was also doing special assignments. I was usually assigned to drive every African Head of State that visited. Usually, they came at different times.”

Pa Olajide is still happily married with many children in their home in Ado Ekiti.

READ ALSO: NIGERIA HAS NOTHING TO SHOW FOR ALL HER DEBTS – PETER OBI

‘Our effort got wasted’,Atiku comments on Lamido’s dethronement