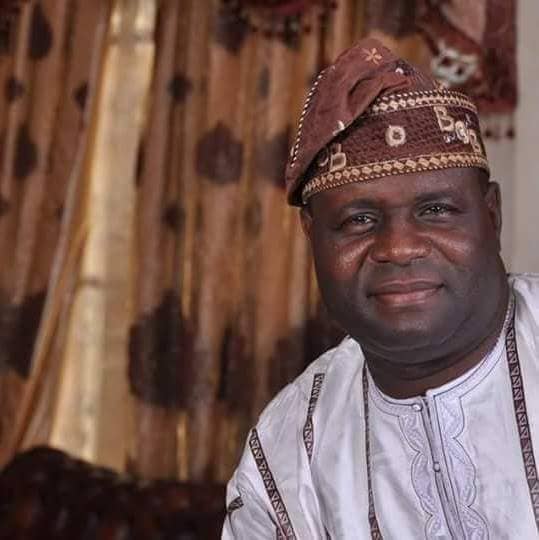 •He Is The KWARA APC, Chairman, Hon. BOLARINWA (B.O.B)

It is no longer news that the Senate President, Dr Bukola Saraki’s grip on Kwara State has been broken. At the last elections, the APC broke that stronghold as they won resoundingly at all the various levels. Now, the APC is in firm control of the Kwara House of Assembly. They also control the State, as the new governor-elect is from APC.

Of course, City People gathered that the victory of APC in Kwara is a collective effort, but some key politicians worked behind the scene to galvanise others.

One of them is Honourable Bashir Onalaja Bolarinwa (alias B.O.B). He is from Kwara South Senatorial district (Ifelodun LG). He is a seasoned journalist. He has been in Politics for more than 30years. He started his political career as a Councilor between 1991-1993 in the Oko Baba Area, in Ebute Metta, under Lagos Mainland and he served for 2 terms.

He was also Chairman from 1999-2002. Later, he was Executive Secretary. It was after the formation of the 57 LG council structure in Lagos, that he was appointed Executive Senator in 2004. He then rose to become the Chairman of Lagos Mainland again. In 2007, he ran for House of Reps. He was in Home of Reps from 2007 to 2011. Before completing his 4-year term, he moved to Kwara between 2009 to 2010 and he was recently saddled with the possibility of how the APC would win Kwara from the PDP.

He told City People that Bukola Saraki lost out in Kwara because he took the Kwara people for granted. “Our politicians should learn from the downfall of Bukola Saraki he told City People. “Elected officials should always look back after they get their mandates from the people who voted them in. The Constitution says every 4 years elections should be held. So they know they have to keep going back to seek for votes from the electorate. Whoever that wins elections should be preparing for elections right from the 1st day. We politicians should not let being in positions of power get into our heads.”

“We should not be slaves to money. That is another lesson to be learnt. Yes. money is important but the reliance on Money as the sole factor of winning elections should be disregarded. If the APC as a party could have won the way we won, when the opposition party in the state say they have the No 3 man at the National Assembly, and they have their man as the Governor of the state in Kwara, and the 16 LG bosses are from their party and they were still rejected and got voted out and the people voted for the APC, that means they were not close to the people at all. That is a big lesson we must try as much as possible to be on the side of the people. And do the best for them. Remember there is always another day. In Nigeria, people should no longer be taken for granted. Kwara State is lucky to have a new governor-elect in the person of Alhaji Abdulrahman Abdulrazaq. This is because he is committed to turning things around in the state.

He is right. Abdulrahman Abdulrazaq of the APC is a big fish who has paid his dues in all ramifications, before becoming the new governor of Kwara State. His antecedents speak volume of his competence and his impeccable character easily worked for him, with his popularity increasing by the day till he emerged the Governor Elect for Kwara State. Not many Kwarans thought it will be possible to defeat the Saraki Dynasty, but with great determination, they went all out and resolved collectively not to vote for any of Saraki’s candidates in all the categories of the 2019 elections. City People gathered that underestimating Kwara governor-elect, Abdulrahman Abdulrasaq, was the biggest mistake of Dr. Bukola Saraki. And he paid dearly for it. The emergence of Abdulrahman as Kwara governor –elect brought to an end, decades of long domination by the Saraki family. The situation became even more devastating after Bukola Saraki lost his own re-election to the Senate.

Who is the new governor-elect in Kwara? City People can authoritatively reveal that the man Abdulrahman Abdulrazaq is not new in Kwara politics. After his first shot at the governorship in 2007 under the banner of Congress for Progressives Change (CPC), he also contested the Kwara Central Senatorial District under the Peoples Democratic, PDP, in 2011. He did not make any significant impact. Given this, some of his concerned friends were said to have advised him to face the business that launched him into affluence and fame. But the billionaire did not despair. Interestingly and as fate would have it, the relationship he had with Gen Muhammadu Buhari when he contested as governorship candidate on the platform of the CPC came into play after 2015. That he emerged as the gubernatorial flagbearer of the APC in the keenly contested primaries didn’t come as a surprise.

Among the aspirants, Alhaji Abdulrazaq Abdulrahaman is about the only one that didn’t have any political stint with the Sarakis political dynasty and his governments since 1999, a record that stands him tall among others. Since 1999, when Nigeria returned to democratic rule, Alh Abdulrazaq Abdulrahaman and his elder brother, Alh Alimi Abdulrazaq have been in the forefront of the political struggle to unseat the Sarakis political dynasty in the state. His brother, Alh Alimi Abdulrazaq who brought PDP to Kwara State and single-handedly funded the party and the election, contested against Alh Mohammed Alabi Lawal of the then All Peoples Party (APP), sponsored by Dr Abubakar Olusola Saraki but lost.  For Alh Abdulrazaq Abdulrahman, who also contested for the gubernatorial election in the state in 2011 on the platform of CPC, and for Kwara Central Senatorial District on the platform of Peoples Democratic Party (PDP) against Dr Bukola Saraki, though lost in the elections, he has paid his dues in Kwara politics to become the governor of his state. The successful businessman into oil and gas fought the political battle of his life as the stakes were high for him more than ever before, with the support of the ruling All Progressives Congress (APC), unlike his previous political contests. Speaking in an interview with journalists, the APC gubernatorial candidate of the party Alh Abdulrahman Abdulrazaq said “We are committed to ending the tyranny in our state. O To Ge. We will ensure workers are paid their dues at the right time. A government that cannot account for trillions of naira of public funds cannot expect to be trusted again, Their desperate attempt to incite the public against us has failed. Every student of history understands the role my father AGF AbdulRazaq SAN played in 1955 to convince the Willinks Commission on Minorities that Ilorin belonged to the northern region. Where was Saraki in those years?  Where is his sense of history?” He also said that he will not create rancour with PDP even if they plan to do so’’. The icing on the cake for Alhaji Abdulrazaq Abdulrahaman to coast home to victory among other aspirants was when two of the leading aspirants, Mohammed Dele Belgore SAN, and Ambassador Seriki Gambari stepped down and ordered their delegates to vote for him.

These are part of the many ways, Abdulrahman fought Saraki. For instance, he also utilized a weekly programme on local radio in Ilorin to attack Saraki dynasty as well as the state government and its policies. The programme had gone far before the media team of the government organized a counter programme. The Social Intervention Program, Tradermoni, by the Federal Government which was launched in Kwara State by Vice President, Professor Yemi Osinbajo also turned out to be a huge success, contrary to claims that market men and women and artisans would shun the programme. The  “O to ge’, meaning “Enough is enough” political slogan of the APC governorship candidate was the political masterstroke that further increased his popularity among the stakeholders in the state. The state government even had to complain about the slogan but all were in futility. The candidate and the party also resumed silent but aggressive mobilisation and sensitisation of the electorates across the nooks and crannies of the state to increase the support base of the party and remove Saraki’s political dynasty once and for all which was also one of Abdulrahman’s strategies.

Abdul Rahman Abdul Razaq was born 59 years ago in Zaria into the family of the first lawyer from the country’s northern region, AbdulGaniyu F. (AGF) Abdul Razaq (SAN) who holds the prominent traditional titles of Mutawalin Ilorin and Tafida of Zazzau (Zaria), Abdul Rahman a Muslim, comes from Ilorin West local government, which is in the Kwara central senatorial district of the state. Abdul Rahman attended Capital School Kaduna between 1966 and 1968; Bishop Smith Memorial School Ilorin between 1970 and 1971; and Government College Kaduna where he sat his West African School Certificate Examination (WASC). As a young man, Abdul Rahman opted to become an entrepreneur. Hence he makes no pretence to higher educational degrees save for several short executive management courses. Abdul Rahman’s innate entrepreneurial spirit drove him to make history at the age of 31 when he founded Nigeria’s first indigenous oil and gas trading companies, NOPA Oil Services and First Fuels, the first indigenous company to lift crude oil and petroleum products to the United States, Europe and Asia. His success story inspired other young people who also have become accomplished Oil & Gas magnates. Renowned for his immense knowledge of the petroleum industry, his managerial skills and competence cut across agriculture, construction, information technology, shipping and real estate. He is a Consultant to various multinational oil companies and governments including Ghana and Cote D’Ívoire. Abdul Rahman’s humanitarianism in Kwara began long before his foray into partisan politics. This included educational sponsorship of indigenes, granting of scholarships, and provision of potable water in disadvantaged areas of the state. Hundreds of women and youths have also benefited from his empowerment schemes, vocational training, provision of start-up capital for small scale businesses and provision of tools post vocational training and many others.

Meet The Man Who Made Dr BUKOLA SARAKI Lose KWARA was last modified: May 6th, 2019 by City People