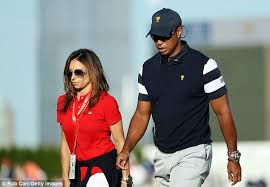 How did he get back up after his self-inflicted woes? David Jones has written about that in this very insightful article for Daily Mail.

For a man who prepares for golf tournaments with obsessive dedication, Tiger Woods seemed somewhat distracted this week during the U.S. team’s putting practice session for the Ryder Cup, which tees off in Paris this morning.

You would think that preparation for the three-day battle against America’s European opponents would be consuming his attention. Yet after every few strokes, I watched him pause to remove his phone from the pocket of his immaculate white slacks and check his texts, occasionally tapping out a hasty reply.

‘Hey, Teegeur! Are you talking to your fancy women?’ rasped the wag, doubtless recalling how the golfer’s ex-wife, Elin Nordegren, discovered his serial adultery by sending a bogus text to one of his mistresses, whose numbers he recklessly saved in his phone.

The smutty jibe brought one or two sniggers, but most people tutted disapprovingly. 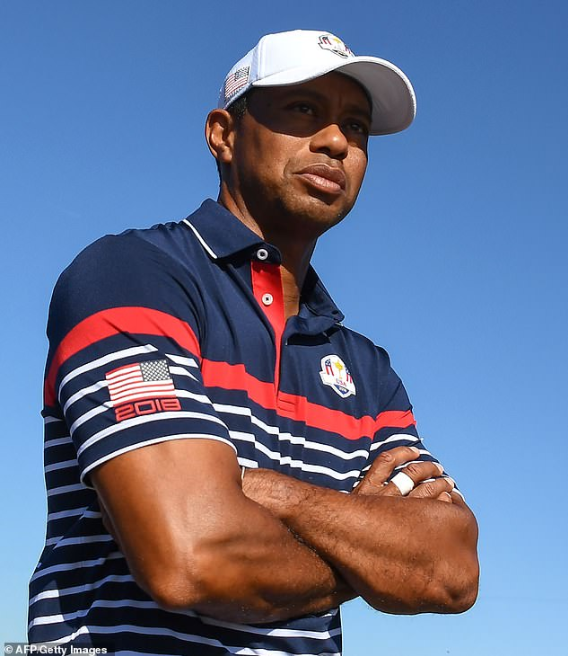 From the moment he stepped off the plane at Charles de Gaulle airport on Monday, closely followed by his latest girlfriend, Erica Herman, 34, who manages his Florida restaurant, Woods has been greeted like a messiah. Among a stellar cast of most of the world’s best golfers, his is virtually the only name on anyone’s lips.

As for Woods, if he heard that snide remark, he didn’t seem to care. Never has the notoriously surly golfer seemed so happy and relaxed. For the change in his fortunes has been dramatic.

Barely a year ago, he appeared in a Florida court after being found slumped at the wheel of his idling Mercedes, having swallowed a cocktail of painkillers. From his bug-eyed police mugshot it was painfully clear he had hit rock bottom.

This was the final humiliation in a ruinous decade, during which he not only lost his squeaky-clean image, his family, and at least £100 million in alimony and cancelled sponsorship contracts, but suffered such serious spinal injuries that doctors feared he might not walk again, let alone recover the form that made him arguably the finest golfer ever to swing a club.

Yet now, aged 42, balding and slightly stooped after four back operations — the last of which entailed fusing two vertebrae — Tiger is roaring again, on and off the golf course.

Last weekend, after five years without a competitive win and a slump as low as 1,199th in the world rankings, he pocketed £3.5 million after triumphing at the prestigious PGA Tour championship in Atlanta and, by so doing, coming second overall in the FedEx Cup.

From the scenes of wild euphoria when he sank the clinching putt, it was clear his fans have forgiven him his indiscretions.

Meanwhile, Woods’s business affairs are flourishing again. Such was his universal appeal, as the first black person to dominate a sport that belonged to the wealthy white elite, that Woods became the planet’s highest-paid athlete soon after turning professional at 20. He has since amassed an estimated £1.1 billion in prize money and endorsement deals.

At the nadir of his self-inflicted woes, however, when he was dropped by sponsors and embroiled in a divorce wrangle, his finances appeared so precarious that he considered selling his beloved 155 ft yacht, ‘Privacy’.

But all that is in the past. His resurgent popularity has secured him fresh tie-ins with Bridgestone and golf brand TaylorMade, while he retains his £152 million-a-year partnership with Nike. The Woods empire, reportedly worth £573 million in 2016, seems set to expand.

Then there is his new girlfriend Erica, with whom he may have been exchanging texts as he practised on Wednesday. With her understated looks, mousy hair, and blue-collar background (her mother, I have discovered, lives in a mobile trailer home) not to mention her chequered business dealings — more of which later — Miss Herman is not exactly Woods’s usual type.

Nor, to her credit, does Erica bear comparison with many of the 120 women whom Woods reportedly admitted bedding when he underwent treatment in a Mississippi sex addiction clinic in 2010.

Among his secret harem, bleached hair, revealing outfits and, one suspects, surgically enhanced figures were the common denominator.

However, he is evidently smitten, for Erica is installed in his suite at the five-star Waldorf Astoria Trianon Palace Hotel in Versailles, where the American team are staying, and she was on Woods’s sinewy arm on Wednesday evening at a Ryder Cup gala dinner.

Indeed, this has been something of a ‘coming out’ week for the couple. Though they have been together for a year, during which she has travelled the golf circuit with him and moved into his mansion, it was only last weekend, after he won in Atlanta, that they made a public show of affection.

As a damp-eyed Woods walked off the 18th green, Erica greeted him with a prolonged hug, and TV microphones picked up their whispered exchange of ‘I love you’.

Should the U.S. team’s reborn talisman seal one of the least likely sporting comebacks ever seen by leading them to victory over Europe on Sunday, Erica will share the champagne.

According to one of Woods’s early mentors, Wally Goodwin, his golf coach at Stanford University in California, it will be well-deserved.

‘I have been watching Tiger this week, and there’s a new calmness about him,’ he said. ‘Something has fundamentally changed. There is a difference in the way he walks and carries himself. He even has a calmer expression.

‘If this new girl of Tiger’s comes from a fairly humble background and is down to earth, I believe he will be responding well to that.’

We must hope he is right.

So how has Tiger arrived at this pivotal point in his life? And can this flawed genius ever change his stripes?

Though he has passed many milestones in his glittering career, should he surpass Jack Nicklaus’s record of winning 18 major championships (Woods stands second in the all-time list, with 14 victories) it would surely be his greatest triumph.

As he rose to the golfing summit, he was regarded as the man who had it all, and then some. He was courted by presidents and big corporations, respected for the charitable foundation he’d set up to educate less fortunate children, feared by his sporting opponents, pursued by beautiful women, wealthy beyond imagination. And he appeared to have found his soulmate in his wife Elin, the daughter of a radio journalist and an eminent Swedish politician.

Elin bore him a daughter, Sam, now 11, and a son, Charlie, aged nine. Then, on Thanksgiving Day in November 2009, Woods’s world came crashing down. When the National Enquirer tabloid published a bombshell story about his affair with New York VIP nightclub hostess Rachel Uchitel, he swore to his wife it was a lie.

However, when he was asleep she found Uchitel’s number in his phone and sent her a text saying ‘I miss you’. Almost instantly, Woods’s mistress replied that she was desperate to see him. His duplicity had been exposed. In the ensuing months, as an array of clandestine lovers sold their tawdry stories, the astounding double life he had been leading for years, all the while being portrayed as an upstanding sporting role model, unravelled.

During the next eight years, his public decline became a parable for the misery that lies in wait for those who abuse their wealth, fame and God-given talent.

But even for a man who betrayed his wife perhaps 120 times, maybe more, it seems there is redemption. With commendable kindness, his ex-wife Elin — who earned a psychology degree after the divorce — has forgiven Woods, and they are now said to be on good terms, sharing custody of the children to whom he is, by all accounts, a devoted father.

Now, after a couple of romantic false dawns, he has found apparent stability with Erica. Given her background, it is some elevation for her. In the Florida town of Boynton Beach, where she was raised in an unremarkable rented bungalow, her former next-door neighbour remembers her father Charlie, who died prematurely, as an habitual drunkard.

Her mother, Arlene Parton Dunne, now remarried, lives in a trailer — albeit a rather nice one. The neighbour describes Erica as ‘a smart girl’ who was single-minded in her ambition to better herself.

After gaining a degree, she went into business with her then boyfriend, Jesse Newton, and a third partner named Ricky McIntosh, borrowing £153,000 with plans to set up a string of five nightclubs in Orlando.

However, the venture failed and public records show their investor, Tom Morris, successfully sued Miss Herman for the return of his money, plus more than £31,000 in fines, interest and costs.

As she was ordered to pay this off in instalments of around £225 a week — to be deducted at source from the money she earns for running Woods’ Jupiter restaurant — it will take her many years to repay the debt. Unless, of course, her notoriously parsimonious boyfriend is suddenly seized with generosity.

But her past financial problems don’t end there, the court papers reveal. In 2012, a bank sued her for the £9,900 she borrowed to buy a BMW, and in 2014 she and Jesse Newton — who declined to comment when I called him this week — were served with an eviction notice after allegedly failing to pay rent to their landlord for two years.

Then, last December, debt collectors filed yet another lawsuit against Miss Herman, this time for thousands of dollars’ worth of items she allegedly bought on credit for the failed nightclubs. The case was dismissed after the debt agency failed to locate her. Presumably they didn’t look on the golf course.

All that must seem a world away from the magnificence of Versailles and the manicured greens of the Ryder Cup venue. Having caught Tiger’s roving eye while working in his restaurant, and impressing him with her savvy and unswerving devotion, she is his girl now.

Photographs released yesterday show her posing proudly beside him in a silver gown as the Ryder Cup players lined up with their wives and girlfriends.

If the great comeback rolls on, and Woods does beat Nicklaus’s record to become the most decorated golfer of all time, she will have played a small, but significant, part in one of sport’s most unlikely and uplifting stories.

Meet the woman who tamed Tiger Woods after his affairs with 120 women cost him 100m and ruined his golf career was last modified: September 28th, 2018 by Igbokwe John