Melanin Popping: More Photos To Show Why Nyakim Gatwech Is Popularly Known As ‘Queen Of the Dark’ 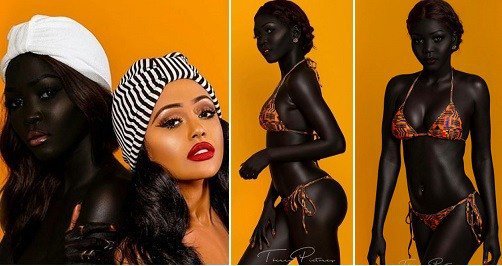 Nyakim Gatwech is a popular South Sudanese-born Model, and she’s popularly called “The Queen of Dark” because of her skin colour.

The 24-year-old is hitting it deep online for her very distinctive dark complexion and for not trying to bleach her skin as some would.

She loves her dark skin, and she’s prepared to clap back at anyone who has anything negative to say about it — including an Uber driver who decided it was his job to ask if she would consider bleaching.

“I was [asked by] my Uber driver the other day, he said, ‘Don’t take this offensive but if you were given 10 thousand dollars would you bleach your skin for that amount?’” the beauty queen wrote on Instagram in late March.

“I couldn’t even respond I started laughing so hard.”

“[Then] he said, ‘So that a no’ and I was like hell to the f*king yeah [that’s] no, why on earth would I ever bleach this beautiful melanin God [blessed] me with,” she added. “[Then] he said so you look at it as a blessing?”

“You won’t believe the kind of questions I get and the kind of looks I get for having this skin.”

Melanin Popping: More Photos To Show Why Nyakim Gatwech Is Popularly Known As ‘Queen Of the Dark’ was last modified: May 23rd, 2017 by Arinze Ago

﻿The Many Mistakes Ladies Make With Their...