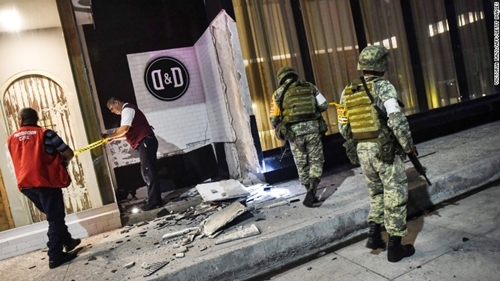 Mexico was hit by its strongest earthquake in a century early Friday, by 12:49 a.m. ET when many people would have been sleeping, killed at least five people and triggered a series of tsunami waves.
The quake, which was felt as far as Mexico City and Guatemala City, was registered off Mexico’s southern coast just as heavy rains from Hurricane Katia lashed the east. The epicenter was in the Pacific Ocean, some 600 miles (1,000 kilometers) southeast of the capital and 74 miles (120 kilometers) from the Pacific coast.
Mexican President, Enrique Peña Nieto said the quake was the strongest earthquake Mexico has experienced in 100 years.
On his verified twitter account, Nieto tweeted, “Civil protection protocols are activated, including the National Emergency Committee.”
It appears even the capital, hundreds of miles away, was not spared from the quake’s tremors. Mexico CIty Mayor Miguel Angel Mancera said parts of the city are without in an interview on Foro TV. Videos on social media showed significant tremors in various parts of the country as well as major damage to buildings and infrastructure, including traffic lights shaking.
Paulaina Gomez-Wulschner, was driving when it struck. She heard an earthquake alarm go off on the radio, parked her car and joined others stood in the middle of the street to avoid falling objects.
“This was a very, very strong earthquake, one of the strongest I’ve felt, and I was here in 1985 when that earthquake collapsed Mexico City,” she told CNN.“It was very scary,” she said.
Gomez-Wulschner said she could hear sirens, ambulances and helicopters in the aftermath, but did not see any immediate damage near her.
But a receptionist at the Intercontinental in Mexico City said he only felt light shaking.
Mexico Hit by ‘Strongest Earthquake in a Century’ as Magnitude 8.2 Tremor Triggers Tsunami Waves was last modified: September 8th, 2017 by Arinze Ago

‘We warned President Buhari not to appoint Alhassan’- El Rufai

Major earthquakes of the past 30 years