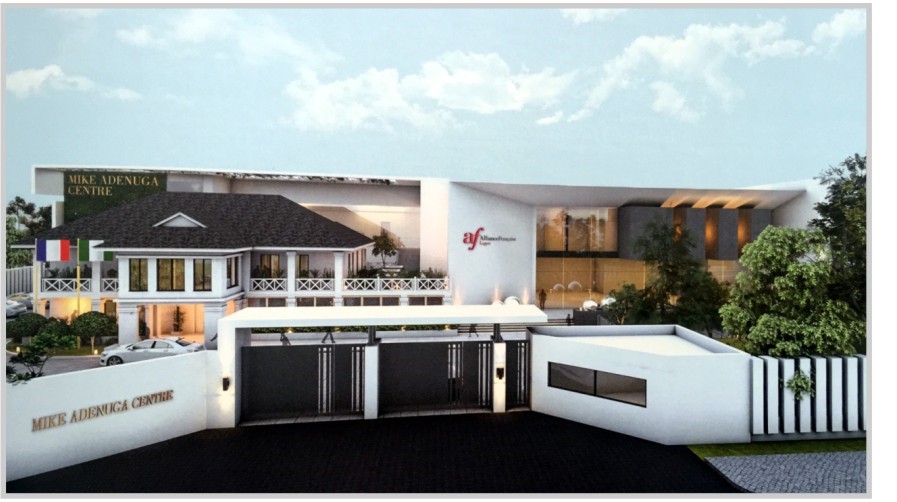 Have you driven along Osborne Road, Ikoyi, in Lagos lately? Did you notice a new and imposing mansion, precisely at 9, Osborne/Kings way in Ikoyi, Lagos?  The huge structure is a corner-piece edifice on the road leading from Osborne to Kingsway road.

For a long time now, construction work on the project had been on-going and passers-by had been wondering and asking questions about what was going on there. Moreso there was no signboard revealing what the project was all about. Now, the structure is at the completion stage and many people have now seen that the white imposing structure was built by Globacom boss, Otunba Mike Adenuga.

To say the former old and archaic house has now been converted to edifice has worn a new look, is like stating the obvious. As at last week when we drove across this road, the edifice had been labelled, Mike Adenuga Centre.

Last year, French President Macron visited Lagos to commission the project, which is now at the completion stage. So, the question many people now ask is, will Otunba Mike Adenuga use the place as his new office or as one of the Globalcom offices? But we can tell you that it’s more than that. The edifice is the headquarters of Alliance Francaise, a French language and cultural centre in Ikoyi, Lagos.

The Alliance Francaise of Lagos (French: l’Alliance Française de Lagos) is a Nigerian non-profit institution in Lagos whose statutes have been approved by the Alliance Française of Paris. The Institute is involved in training and education of Nigerians, most especially Lagosians learning French language and culture.

The new venue will offer numerous facilities: a world-class art gallery, a French restaurant with a daily French bakery, a state-of-the-art cinema, artists’ studios, an outdoor amphitheatre, a library and e-library, nine fully-equipped French language classrooms, translation and interpretation service, Campus France branch, offices and much more. Open to all, the high-profile cultural centre will offer more than 200 events yearly for thousands of patrons, including concerts, cocktails, dance shows and exhibitions and will be fully operational before the end of the year. The Institute was established in 1959.

About 4,000 students register annually at the Institute for its programmes. It is the headquarters of the General Delegation of the French Alliance of Paris in Nigeria. There are ten sister locations in other parts of Nigeria including Enugu, Ibadan, Ilorin, Jos, Kano, Kaduna, Lagos, Maiduguri, Owerri and Port Harcourt. The Lagos Institute is the largest alliance in Africa. As one of the worldwide networks of Alliances, it works closely with the Alliance Française Foundation in Paris and the Nigerian government. As the operator leading to the promotion of French language and culture, it is supported by the French Ministry of Foreign Affairs. The French Alliance is also bound by the agreement to the Ministry of Education of Lagos State for a period of 10 years renewable under a continuing education programme for French teachers of the state.