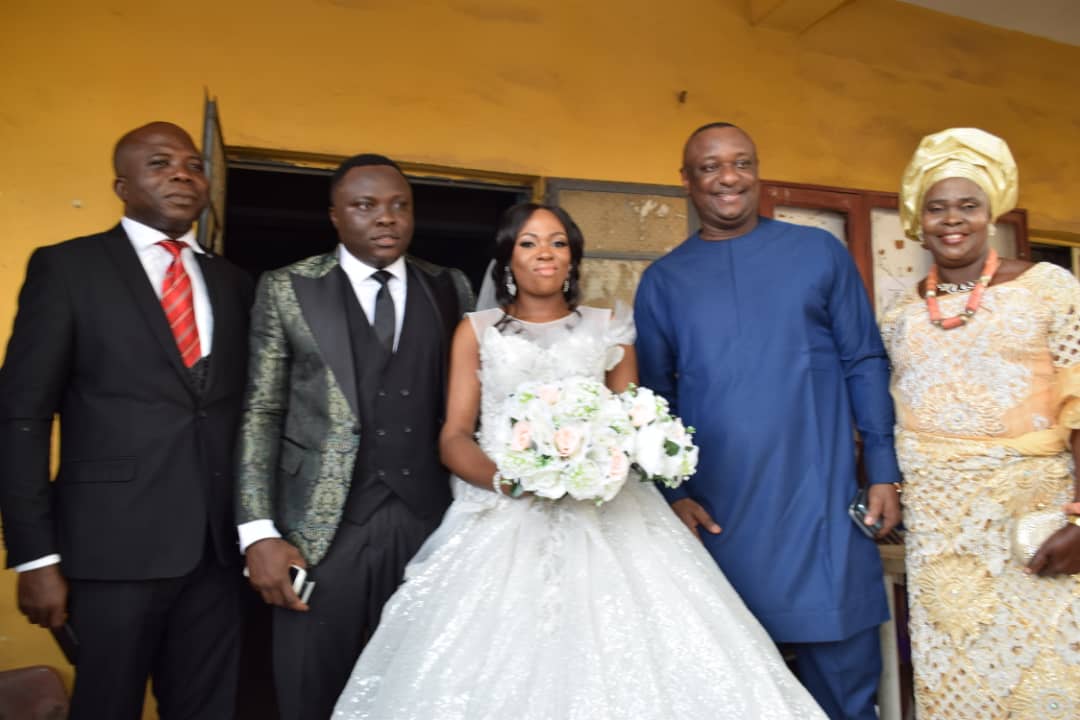 The honourable Minister of State for Labour and Employment, Festus Keyamo SAN has advised one of his blood relations who got married over the weekend on what it takes to survive marital squabbles.

The Minister disclosed this at the marriage ceremony of his cousin, Maryam Keyamo, who grew up under his tutelage.

The lucky bride, Maryam got married to Desmond Chima, a young and successful media entrepreneur and manager of popular music superstar, Harrysong.

The marriage between the duo has been a fanfare of a sort kicking off in Warri, Delta State with a traditional ceremony before the white wedding was held at the Decorum events centre, Oregun, Ikeja Lagos last Saturday, November 23rd, 2019.

The Minister who attended the wedding in capacity of the Chairman and bride’s ‘father’ bluntly advised the young lady on the secrets of marital bliss, “you have to make sure you submit all to your husband, total submission and respect are some of the basic rules to a lasting marriage”, the Minister warned.

Buttressing his point, the Senior Advocate of Nigeria reminded the newly-wed about their elderly siblings whose marriages have been waxing stronger and why it has been so.

“I could remember at a time, long ago before the advent of GSM, my sister left her husband’s house in Port-Harcourt and visited us in Warri, on the second day, my father asked for the letter that authorized her for the visit and when she couldn’t produce it, he compelled her to go back immediately and ever since, she never repeated such strange visit, today she’s been married, I think for 18 years and same with all of them,” he said.

“So, Maryam, don’t come and tell me your problems, stay in your husband’s house and I pray God in His infinite mercies continue to bless the union,” the minister added.

On a lighter mood, the Minister took a jibe at the groom, Desmond Chima whom he accused of “stealing” his daughter while on a business mission to his Law Chambers.

“I was surprised to see Desmond who was a client still coming around even after the case was over, so I asked them one day, what’s Desmond still looking for here, only to find out he has actually ‘stole’ my daughter,” Keyamo said.

On a final note, the Minister advised the groom never to raise his hands on his wife, the worst thing any man can do is to beat his wife, please don’t do it, he told the groom.

READ ALSO: MEET THE BRAIN BEHIND ONE AFRICA MUSIC FEST

Mr. Eazi slams Hip TV for allegedly failing to give him ‘Next Rated’ car since 2016