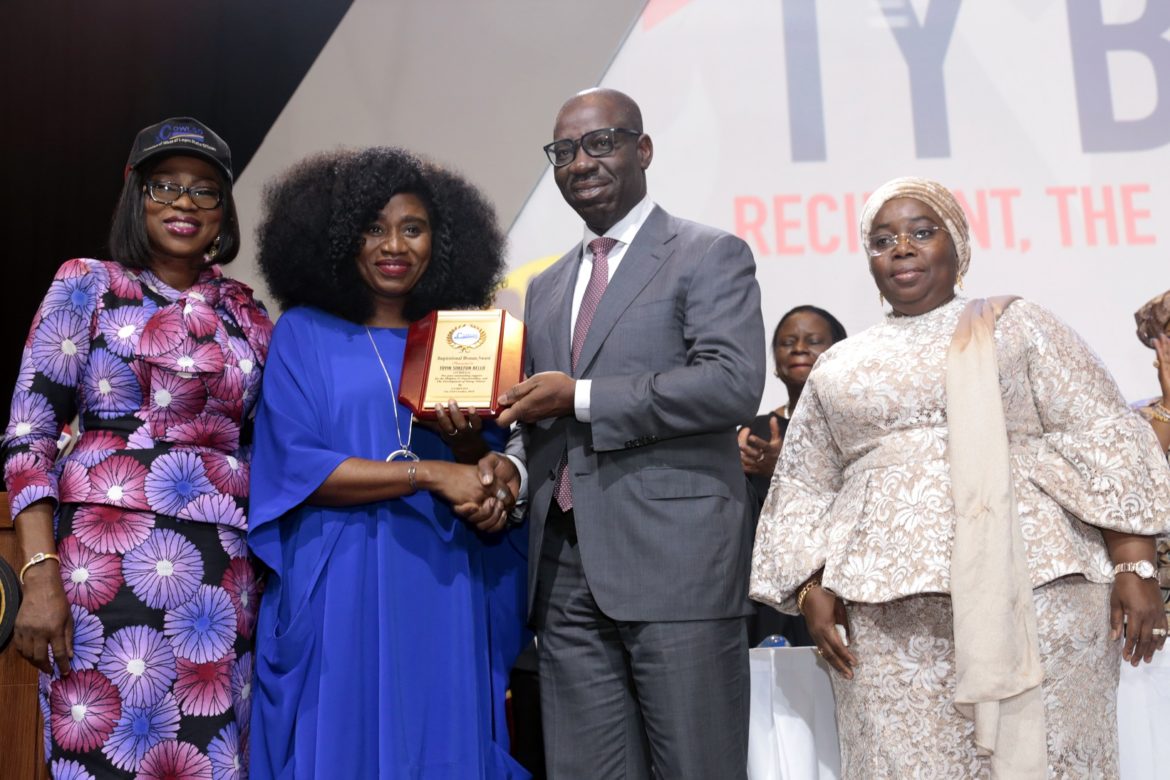 The Olowo Eko of Lagos, Oba Rilwan Akiolu was fully represented at the 3 days conference. Though he couldn’t make the event but his staff of office was at Eko Hotel for the 3-days conference. Chief Obanikoro of Lagos led  over 10 of his white cap chiefs to the 3-days event.  They also brought Olowo Eko’s good will to the First Lady of Lagos, Mrs Bolanle Ambode. So also did 3 of his beautiful Olooris.

NDUBUISI KANU WITHOUT HER HAT

Former First Lady of Lagos, Gladys Kanu, wife if ex-Military Governor of Lagos State, Rear Admiral Ndubuisi Kanu was also at the event. She attended 2 days of the 2018 COWLSO looking pretty in a dinner gown but without her hair fascinator. She is known to have rich collections of different fascinators which she rocks to many parties.

AND IT WAS SINATU OJIKUTU’S 73 BIRTHDAY

It was double celebration for former Deputy Governor of Lagos, Mrs. Sinatu Ojikutu last week as the former deputy Governor turned 73. The ageless woman of substance sat beside her former old teacher, Mrs. Doja Otedola. She chatted freely with her while the event lasted.

FORTHWORTHFARMS, REHOBOTH BREAD give OUT PRODUCTS TO OVER 3000 DELEGATES

Even those who didn’t have a car gift also got many surprises at 2018 COWLSO. Big Lagos farm, FORTHWORTH farms gave out smoked cat fish, fresh cat fish, ewedu and fresh pepper. It was distributed freely to the delegates. So also is freshly baked bread from one of the biggest Lagos Confectionary, Rehoboth confectionary. There was also free medicals for many of the delegates.

TIWA SAVAGE, OLAMIDE, DJ REAL AND OTHERS MADE GUESTS DANCED FOR HOURS

Emeka Daniels, the ceo of Centre stage events and management coordinated the event. They were the one in charge of the stage, back stage and coordination. They were fully on ground to make sure the event went well from conceptualization to actualization.

It was an informative plenary session throughout the session of 3 days that the event lasted.  One of it is parenting digital kids. The speaker Charity Babatunde spoke excessively on why parents should be involved in their children’s day to day activities. She explained that parents should know about android phones. Don’t deprive your children privilege to computer. No matter how literate you are, you must be able to train children. She said that there must be an age at which one must introduce ones child to adroid phones and children who are too young should not be exposed to android phones. Other topical issues which was discussed was Children having children and the hazard of teenage pregnancy.  Dr Veronica Ayo Vaughan Iwayemi discussed causes of children having children and how to prevent it

MANY FREE GIFTS FOR WOMEN

There were many free gifts for many of the delegates whose raffle tickets were picked. Some were also empowered with gifts that could turn their lives around. Some got grinding matching while some got Motorcyle. Some also got a trip to Dubai and United Kingdom with all expenses paid by Lagos State Government. Governor Akinwunmi Ambode whose philanthropic nature was brought to fore as he made one of the lucky delegates cry for joy as her trip to Ghana was changed to London by the Executive Governor of Lagos State.