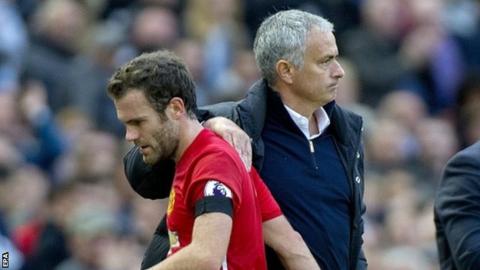 Juan Mata believes the environment at Manchester United has led to changes in Jose Mourinho’s approach to management.

Following the Portuguese’s appointment as United boss in May, some fans raised fears over his ability to play ‘the United Way’.

Mourinho has succeeded, however, in reintroducing exciting, attacking football at OId Trafford, leading the team to nine straight wins in the process.

“He has changed,” Mata told The Independent. “It is a different environment; it is a different club and squad. This club has always known that they play one kind of football which is about attacking and creating chances. We are doing that and he is happy with the performances.

“Everyone can see the players are playing with more confidence. He is the same person, with almost the same staff but what has changed is the environment.”

Mata played previously under Mourinho at Chelsea, but found himself frozen out of the Blues squad despite winning back-to-back club player of the year awards.

The two have seemingly buried the hatchet and Mata is enthusiastic about recent results and the feel around the club.

“It is nine wins is a row now and in terms of results, it’s the best I have known at Manchester United,” he said.

“In terms of the confidence and mentality we are showing it is also the best time since I have been here.”

Though the diminutive Spaniard has lifted silverware since joining United in 2014, he admits he is eager for the team to achieve greater success.

“We have won the FA Cup and the Community Shield but when you are at a club like this you expect to fight for everything,” said Mata.

“When I came it was after Sir Alex Ferguson, who was the most successful manager in the club’s history, so it was not easy.

“But we feel we are getting there. The last two or three years have not been the best in the history of the club but, hopefully, the next ones will be very good and, hopefully, I will be here to live it.

Mata, who scored the opener in Tuesday’s 2-0 EFL Cup semi-final, first leg victory over Hull City, has stressed the importance of continuing the team’s winning streak against arch-rivals Liverpool this Sunday.

He said: “It’s been not so good in some games but we are winning and when you are not playing at your best but winning it creates a strong mentality and this club should have it always.

“We have won nine games in a row but football has no past and the present is Liverpool.”