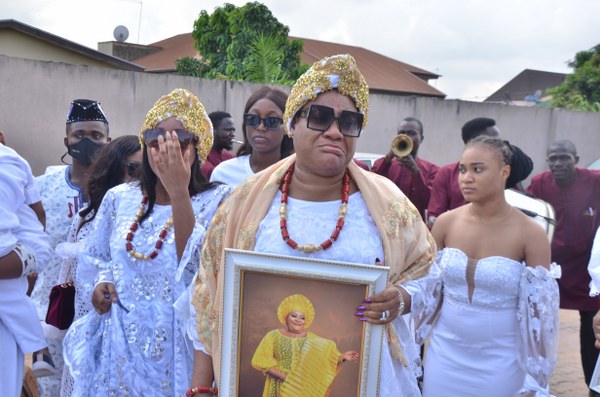 On Saturday 16th October 2021, Star Actress,Nkechi Blessing and her sibling finally laid to rest their mother ,Madam Gloria Obasi Sunday at Omega Funeral home,located at Berger area of Lagos .
At 9:00 am, Nkechi Blessing and her siblings were seen dancing into the funeral home carrying the portrait of their late mother. As they proceeded into the venue, the coffin bearers were seen dancing in with the coffin ,containing the remains of Late Madam Gloria Obasi Sunday.

As they approached the venue, Nkechi Blessing passed out on the sight of her mother’s coffin as family gathered around to revive her. After this, choristers began to sing hymns of different melody ,as people sat quietly mourning the deceased. After this, Nkechi Blessing and her siblings took their turns to say their final goodbye,admist tears. After a final speech from Mrs Ruth Gabriel, Late Madam Gloria Obasi Sunday was buried and all roads led to Wempco Road in Ogba Lagos State for the reception program.
As guests arrived the venue, Nkechi Blessing took her time to welcome everyone present; Akemene dance group took to the stage immediately as they danced exhibiting Igbo tradition, guests cheered them as they pulled many interesting stunts. As this went on, popular movie star,Toyin Abraham danced in, joining Nkechi Blessing and the dance group on the stage.
Other celebrites from the enteretainment industry such as Clever J, Pretty Mike, Iyabo Ojo, Adekemi Taofeek and many others arrived to show their support for their colleague and friend. Toyin Abraham kept on ensuring all things were set in place for the guests while Gentel G took to the stage to anchor the program.
As he went on, he talked about Madam Gloria Sunday’s great impact in the Abule-Egba axis as her popular outlet ‘’Pere’’ had helped many upcoming artists come to spot light. After this, Afrosonic band took over the stage as Nkechi Blessing and friends once again graced the stage. As this went on, Arole took to the stage to entertain guests as he sent guests laughing and hailing him.
Gentle Gee once again declared the stage open for the popular Dj Kamol to entertain guests as he entertained the guests for a few minutes before NkechI Blessing took the stage to specially thank everyone who came to show their support, while she strongly declared that her mother still lives on.

TINUBU AND 21 YEARS OF UNBROKEN DEMOCRACY IN NIGERIA | Tunde Rahman

Funmi Ademola-Salami And Siblings Bury Their Father In Style