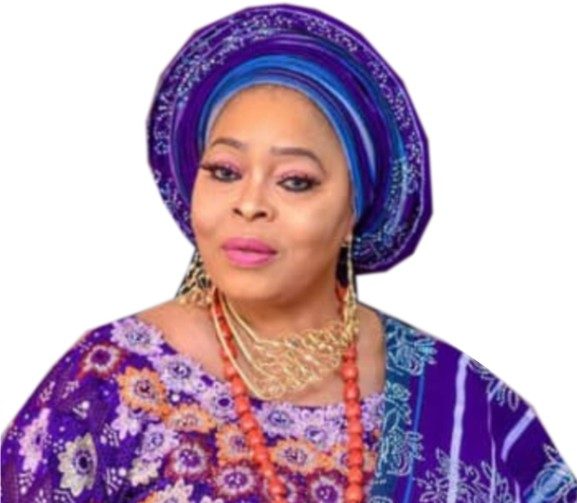 •With Love From Nollywood

Highly respected and stylish actress, Toyin Adegbola, popularly known as “Asewo To Re Mecca” is one of the few actresses who have remained relevant in the Movie industry for over 3 decades. Her role in the movie entitled. “Asewo To Re Mecca” shot her to limelight and she has since remained a force to reckon with in the movie industry. She lost her husband some years ago, and the union was blessed with two children, a boy and a girl.

On the 26th of October, 2019, Crème de la crème gathered in Ibadan to witness the marriage between Toyin Adegbola’s daughter Adeola, and her heartthrob, Tolulope Rogers, in Ibadan.

The church service took place at the Methodist Church Nigeria in Ibadan, with the Rev. Ebenezer Oluwatoba, and the  Most Rev. Olumuyiwa Odejayi and other Bishops, priests, pastors as Officiating  Ministers. After the church service, the couple, their families and well-wishers proceeded to Hall of Grace, Jogor Centre, in Ibadan for the reception.

It was, indeed, a well planned and organised ceremony, as lots of guests flew in from different parts of the world to be a part of the ceremony, while movie stars traveled all the way from Lagos and Abeokuta to celebrate with one of their own.

Popular comedian, Gbenga Adeyinka, the first, was the compere. Alaafin of Oyo, Oba Lamidi Adeyemi and his second wife, were the royal father and mother of the day.

The ceremony had 4 different Aso Ebi on display, different lace, but all royal blue, which was the official colour of the event.

The venue was beautifully decorated in royal blue and gold colour. There was so much to eat and drink, as three different caterers catered for the event. Also, Lagos exquisite touch took charge of the event planning.

The couple changed into 3 outfits at the ceremony, while the bride’s mom, Toyin Adegbola, who was overwhelmed with the large turnout of guests and movie stars at her daughter’s wedding changed into two different outfits. Also, her only son stood in as father to the bride on the sister’s special day.

Toyin Adegbola is, indeed, loved by her colleagues. Almost all the veterans who reside in Ibadan turned out for the wedding.

It was all Nollywood affairs, as all the big names in the Yoruba movie industry were present to support their colleague  Lere Paimo, popularly known as “Eda Onile” was one of the elders who graced both the church services and the reception. He was even called out during the church service by one of the Bishops to be prayed for. According to the Bishops he watched him Paimo while he, the bishop, was growing up on Tv and so delighted to be seeing him live, and he felts privileged, he prayed to God to sustain him, and continue to bless Lere Paimo with more wisdom to entertain and educate people.

Veteran actor, Baba Olofa, who has spent over 4 decades in the Yoruba movie industry, was not left out. He sat close to his colleagues like Samson Eluwole popularly known as  “Jinadu Ewele” and one of the founders of the jesters’ international group”, Baba Aderupoko at the ceremony.

Former Chairman of ANTP, Dele Odule, was equally present at the ceremony. As usual, he sat quietly with his close friends in the industry.

Popular actor, movie director, Anta Laniyan, whom lots of younger stars look up to in the industry as a mentor and role model, was also present at the wedding to support Toyin Adegbola.

With love from Abeokuta Ogun State National President Tampan, Bolaji Amusan, a.k.a Mr. Latin was among the Nollywood stars who graced the occasion. He led many movie stars from Ogun State to the wedding.

Movie icon Adebayo Salami stormed the event in the company of his son, Femi Adebayo. Father and son were among the side attractions at the ceremony, as fans and guests, couldn’t help but admire them and also took selfies with them.

Peju Ogunomola is one veteran actress who keeps to herself a lot in the industry and she hardly attends events, but the good role interpreter made it to the event too, dazzling in her royal blue Aso-Ebi to complement her beautiful look.

Ayo Mogaji is one of the few actresses, who maintain a very cordial relationship with Toyin Adegbola. She stepped out in one of the unique royal blue lace Aso-Ebi for the ceremony. The particular lace was spotted by very few movie stars such as Fathia Balogun, and the Bride’s mother also changed into the lace before the party proper started.

Fathia Balogun stood out of the crowd as she was looking ageless and gorgeous in one of the unique Aso Ebi won by the selected few actresses.  She was also the assistant host for the party. She was on her feet throughout the period of the party and made sure guests and movie stars were properly taken care of, and also they were given the 5-star treatment which they deserved.

Lanre Hassan popularly known, Iya Awero, dazzled in beautiful lace with her friend Madam Saje. They both sat and enjoyed every bit of the party together.

They all looked gorgeous in their Royal blue Aso –Ebi. They added so much glamour and colour to the event with their presence. They had so much fun, they kept dancing and sharing lots of pictures and videos at the wedding, to celebrate the special day.

Actors like Muyiwa Ademola, Ibrahim Chatta, Jigan, Taiwo Ibikunle, Akin Olaiya, Owolabi Ajasa, were equally not left out. They were all present at the event to support and honour Toyin Adegbola. Folake Aremu also known as Orisabunmi was looking ageless and beautiful in her Aso-Ebi, popular Abeokuta-based actress, Iyabo Oko, was also present at the wedding ceremony.

Chief (Mrs.) Esusu, the governor of Tampan Lagos State Chapter, was also there to represent the association as a whole.

What They Won’t Say About Oba ONIRU’s Burial Party