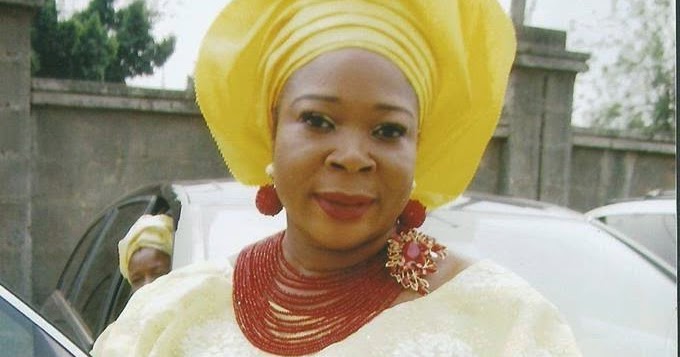 It’s been two  years since  Mrs Bola Amole aka BIMS has been resting with the Lord. A Mother, Friend, Sister, Leader and to some people she was simply Mrs Bola Amole an International Business woman, Agriculturist and Mrs Bola Amole, the Politician. She was one of the first, women to import agricultural crops from Nigeria to the United Kingdom and the EU with an established company called BIMS African Foods 1994.

She came from illustrious Ibadan backgrounds, born into the family of Mr and Mrs Amole in Ona-Ara LG in Ibadan, Oyo State, Nigeria.We called her Sister, Mother, Friend,  Leader, Chief (Mrs). She was a diligent, hard-working, generous, vivacious, public-spirited, passionate, committed, creative, astutely brilliant, optimistic, fashionable, and an absolutely lovely woman, who in addition to all that was gifted with an untainted love for all causes humanistic, decent and progressive.

In Ibadan and in the United Kingdom among her community, she was a star, who had moved from one stage in her life to the other, she took everybody she met, siblings, cousins, and family friends as her own, mentoring as much as she could. Mrs Bola Amole was a role model to many. She encouraged many, and further extended that love to the less privileged, disabled, motherless, fatherless, orphans, deaf and dumb and to many people from all walks of life. She was never tired of connecting with people. She was simply what you will call, a people’s person, a networker, a communicator, a humanist, successful business woman with International reputation across the world, a Business Icon, Philanthropist, giver, leader and generous. She was very fashionable, with unique styles and simple.

She attended Methodist Modern Commercial Secondary school at Elekuro, Ibadan, Nigeria, when finishing went to Divisional Teacher Training College, Eruwa to do her GCE. She then went to Oyo state college of Education, Ilesha for teacher practice and then went onto the University of Ibadan where she graduated in Agriculture Science Education.

Her Hobbies were reading, empowering the less privileged, speaking on behalf of the less vulnerable, networking with like mind people and  woman leadership. She was a teacher at Holy Trinity Grammar School and Oke badan Boys High School for a couple of years, before relocating to London, United Kingdom. She travelled to London in search for a teaching job, was not able to get ascertain the job,  she therefore started doing cleaning jobs, then eventually did a course in Auxiliary nurse and started working in the hospital. Three years after she was looking for a way out, she had a passion for business and started BIMS African Food Store with just £1,000 of her savings in 1992, supporting the business with four nights of work every week and to God be the Glory, BIMS African Foods ltd, UK and BIMS Foods, Nigeria are house hold names worldwide Exporting from 7 countries to 20 different countries worldwide. Her business grew and she received several international awards.

1994, Magazine, EnterprisingWoman. United Kingdom, Nigeria Link; 1997, Business Partners, Africa Business Woman of the year, United Kingdom, NatWest African; 1998, Nigeria Business Award,Outstanding person of the year. United Kingdom, Oasis Promotion; 999. achievers byNew Nation,Black achievers in the UnitedKingdom United Kingdom Who’s Who of black; 2000. Significant & outstandingsuccess in the UK. United Kingdom IC INTEGRAL; 2004Woman SocietyONA –ARA local Government, for Exemplarycontributions to the development of the localgovernment. Nigeria, National Council; 2012. Technicians Association,YEYE Ona-Ara Local Council. Nigeria Nigeria Automobile; 2012. Yoruba Heritage  United Kingdom; 2012.  Award, Outstanding Entrepreneur of the year, Abike Ade Foundation, Supporting Award. United Kingdom; 2012. Enterprise Achievement Award. United Kingdom BBI Awards, Life; 2014. National old student Association Ambassador, for her numerous contribution to the establishment and promotion of great. Nigeria. DTTC Eruwa; 2015. Foundation, Posthumous Lifetime Achievement Award. United Kingdom Abike Ade; 2016. Appreciation, presented by Lord Popat appointed a Minister of the Crown and Government Whip in the House of Lords. United Kingdom, The Certificate of Her friends and colleagues would readily attest to the fact that she was a polymath; she was involved in so many projects all at once, managing her time and energy carefully to be able to multi-task productively, demonstrating passion, intellect and courage. Some of these include her stint as President of Nigeria vegetable Association United Kingdom and Nigeria, a woman leader in Ibadan Oyo state politics, A major spokesperson and pioneer in the export value chain of Agriculture export From Africa to international

borders. Her role in the export of African food is second to none after 20years of being in the agriculture industry, in United Kingdom, being one of the first female foods Exporter from Nigeria to UK, now supplying nationwide.

Mrs Bola Amole was born a leader, with a compassionate loving heart. She was a very generous person who always helped the less privileged. She was a Mother to all! She had great passion for politics since 1979, when she worked as a presiding officer in the UPN/NPN. It was an eye opener for her when her life started changing for the better she decided to go back home to Nigeria to share her little achievements with people, she always liked helping people, she never liked to celebrate herself, she always saw herself as Mrs Bola from a humble family.

In 1999 she joined politics fully supporting AD (Alliance Democratic Party) she worked tirelessly in London for the presidential candidate (Olu-Falae) when they heard about her contribution in London towards her party she was then looked for at the state level. Late Chief Bola Ige gave her all the necessary support and backing she needed to excel in politics; she called him her Father in Politics.

She respected him so much, when she came to the state level she moved straight to her LG (Ona Ara) she was 100% loyal to her leaders and caring to her supporters.

She loved her people and enjoyed being around them, has she had been sponsoring them since 1999.

In the UK she was one of the pioneers in her party and was the only woman, who was picked to look for modalities of forming a formidable party, she happened to be the only female.

Unfortunately, it was believed that some of the leaders believed in the sectional party and this caused a big discomfort for the party, as many leaders left to other parties. She along with six others members decamped to PDP, she decamped with members of Bola Amole Foundation, a project she had been solely funding with her money since 1999 for the people in her local government Ona-ara and Egbeda. Mrs Bola Amole considered herself

has a grassroots politician, in over 20 years of living abroad she still loved sleeping with her people in the village, on hard surfaces by the gutter and drinking and eating with the village.

Later PDP members decamped to Accord Party Oyo State, where she became a very active leader politician in Accord Party. She aspired to be a great woman leader nationwide, having also been an active Labor party member in the United Kingdom since 2010.

She avoided ostentation, lived a modest lifestyle and was contented with her life. She will be remembered for her great contributions to Ibadan, Oyo State politics having to be an active politician since 1999, with her hard earn sweat also the women’s movement in Nigeria and her principled advocacy for the empowerment of women and the girl child, Govenorless privileged the promotion of constitutionalism, human rights and social justice, and her defence of citizen rights and Woman right.

She belonged to a generation of Nigerian women who used their time, professionalism and talents to serve the higher cause of moving society forward, and who are admired not for being female, but for being human and progressive.

Mrs Bola Amole has played her part, someone out there will pick up the baton she has dropped, and we are consoled that the struggle for equity and woman power will always continue as the search for social justice remains an unending global challenge.

In her case, she was a business woman who got involved in Politics wanting to make a change; her expectation was for more women to rise and become great leaders in our society.

“I am back to contribute my quota to the political development of my community, representing Egbeda / Ona- Ara Federal Constiuency. I am never going to be a political Jobber!” – Chief (Mrs) Bola Amole/

Here are a few words of her own, “I am achiever from United Kingdom, who defeated Poverty. I have been in different fields. I read about a woman who is digging wells, which is a male dominated industry. Our Women should not fold their hands and complain; they should engage in productive ventures that will not make them solely

“Women should not forget Margaret Thatcher era in England, they need to go and see

what Helen Jhon-Sirleaf is doing in Liberia. Go around the world and you will see that the in – thing now, is that women are doing better than men. The relegation of women to the farm or kitchen has gone for good.” – Chief (Mrs) Bola Amole, “The whole world is changing, look at what women of the past achieved. I give kudos to Queen Amina of Zaria, Kaduna; Hadjia Sawaba Gambo; Margaret Ekpo and even to Madam Efunsetan Aniwura from Oyo state and many others. They didn’t see themselves as woman, but as people who could make and actually made a change. It iswhen a woman is lazy that she has the time to do all manner of things.”- Chief (Mrs) Bola Amole

She aspired to be in a position to effect positive change not only for women and children but the society at large in the efforts to promote equality, development and peace.

“If Women rise and play their role, I believe, we will in the next millennium witness a

society where peace and justice reign with the added value of Women.”That, of course,was her vision and her mission, the compass for her commitment. – Chief (Mrs) Bola Amole

Mrs Bola Amole lived a life of meaning, purpose and impact. As she is resting with the

Lord all we have to say is: Thank You, Lord.

She is forever in our hearts and her legacy lives on!

I Am A Very Simple But Complex Person Ex-President, Olusegun Obasanjo Reveals His Other Side

Tales of a Yoruba Demon: The Story...

10 Most Unusual Offices around the World...

5 Awkward Thoughts You Have When Going...