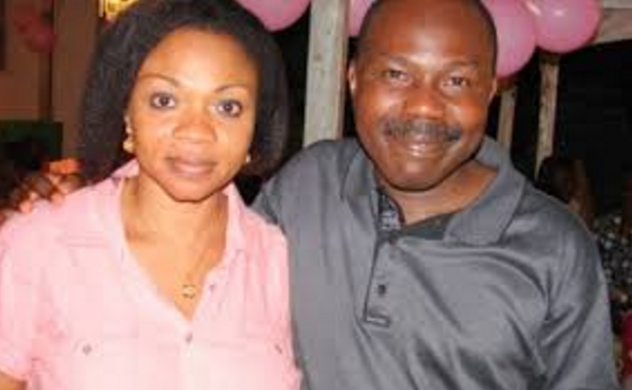 Ikeja, the capital of Lagos was totally locked down as Mrs. Funmilayo Banire rolled out the drums on the occasion of her 50th birthday celebrations few days ago.

Family, friends and well wishers all came to jollificate with the celebrant on her Golden Jubilee achievement.

Family, friends and well wishers besieged the Ikeja GRA home of the Banire’s on Friday May 12th to join the celebrant in praising and praying to God for sparing the life of an engma at 50 Muslim clerics were on ground to offer prayers and word of encouragements to the celebrant.

Guests were treated to sumptous meals and assorted drinks.

The pre-birthday event could possibly pass as the real event because a lot of planning went into it.

The event hall inside the beautiful Rennaisance Hotel GRA, Ikeja was filled to capacity as the creme de la creme of the society came to jollificate with Mrs. Funmilayo Banire on her Golden Jubilee occasion.

At exactly 7:30pm the celebrant who was clad in a beautiful green gown and a black shoe to match came in the company of her lawyer husband and they danced beautifully well from one table to another exchanging pleasantries with guests.

…AND THE ANCHOR WAS TEE A

His usage of sarcasm to pass message across and stage management was highly commendable.

Although Governor Ibikunle Amosun had other engagements hence he delegated his Deputy, Mrs. Yemi Onanuga to represent him.

Rotimi Akeredolu of Ondo State does not attend functions all the time, but he spared out hours out of tight schedule to celebrate with the Banires. He came in company of his beautiful wife Ibironke.

Popular Lagos industrialist, Alhaji Adegunwa was one of the early callers at the event. He stayed till the end of it.

The CEO of Metropolitan Motors, Chief Toyin Okeowo was the event Chairman and he delivered a wonderful speech. He also supervised the cutting of the cake.

In case you don’t know the celebrant Funmilayo Jemilat Banire runs an NGO Rhesus solution initiative and what they do is create healthcare awareness and also help proffer solutions to matters that concern pregnant and nursing mothers.

Both male and female beneficiaries of this scheme were projected on a big screen saying how they have benefitted immensely from it one way or the other.

The celebrant did well not to impose a particular material on guest as everyone wore what looked good on them.

…AND GREEN IS THE COLOUR

The celebrant didn’t impose any particular material on the guest but chose the green as the preferable colour. Almost every guest wore green and this made the event centre look so colourful.

AND SENATOR MUSILIU OBANIKORO SHOWED UP

He said he now feels free to relate with APC and any event that concerns them as the party’s newest member.

Dr. Muiz Banire’s look alike first son, Junior Banire flew down from abroad just to be a part of his mum’s birthday celebration. He had lofty things to say about his mum.

Dr. Muiz Banire was full of praises for his wife. He said she has been very supportive from day one that they got married. He posited that his wife’s prayers and words of encouragement has continued to push him to greater heights.

He brisked in very late to the event and attributed his presence to his wife who mandated him to attend.

As soon as he was introduced he grabbed the microphone and cracked jokes that got everyone laughing inclcuding the comedian MC who anchored the event.

Guests were treated to a buffet at Mrs. Funmilayo Banire’s birthday party. All kinds of food, confectioneries chocolate and assorted fruits and drinks were strategically placed on tables at the corridor of the Rennaisance event hall. Guests queued in an orderly manner to get a feel of the meal.