Why My Mum Gave Me The Name SUNDAY IGBOHO 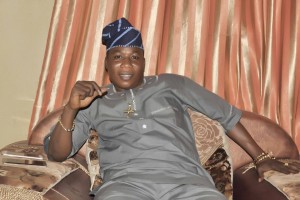 In the ancient City of Ibadan everyone knows the name Sunday Igboho.  Although, only a few people have met him before and many have heard about this man who is regarded as the strongman of Ibadan. He is a politician. He is a grassroots mobiliser. He is a businessman, who he is a property player and a friend of the masses. Though he has lived in Ibadan for very many years, he is not from Ibadan.  Everyone calls him Sunday Igboho that is not his real name is Sunday Adeyemo. Why many refer to him as a strongman is because he has come to be seen as a human rights defender of sorts. He has this reputation for defending people against injustice. Everyday, his Ibadan home is filled up with people who come to complain to him about one injustice done to them by one powerful people.

They see him as someone who can bail them out of their troubles. Even rich and powerful come to consult him, whenever they suffer injustice. And the truth is they all get justice, via Sunday Igboho. He has 2 things working for him.

He is brave and tough. He is also well connected in political sector and corridors of power. So influential is Sunday Igboho that there is no person he can’t call to talk to. Over the years, there is a long list of people who Sunday Igboho has helped to get justice done.

So how did he come about his name? We can tell you that !

Sunday Igboho was born on October 10, 1972. He was named Sunday Adeyemo (his real name). He hailed from Igboho town, Oke Ogun area of Oyo State. He spent his early life in Osun State, after his parents moved to Osogbo. Mr. Sunday Igboho became very famous after his heroic displayed during Modakeke/Ife war which sufaced between 1997 and 1998, where he was a major defendant of Modakeke people. Thereafter, he proceded to Ibadan where he met the then Governor, Lam Adesina through a courageous step while trying to defend the rights of the people. He also met the former Governor, Rasheed Ladoja who is still very loyal to.

As a Human Right Defender that he is known for, he hates the word “cheat” to the core. This however, inspired him to safe many people who were either cheated or duped by fraudsters or land grabbers.

He has travelled to almost every part of the world and he has had opportunity to dine and wine with top celebrities and personalities in Nigeria and beyond.

Last month, a movie was named after him called “Sunday Igboho”, a film by Bolaji Odunsi. It is the story of his life and what a lot of people don’t know about him and the stuff he is made of. There at the launching of the film in Ikeja, Mr. Sunday Igboho opened up why he was named Igboho and a lot of things people don’t know about him. Mr. Sunday Igboho reveals that “I know I am a tough person. So, I laugh when I hear people say they want to be called Sunday Igboho. The name Sunday Igboho scares me myself, though it’s my name! I was named Igboho because it is the name of my town but I myself I am tough. If you check my palms, most women’s palms are not as soft as my palms. I have never been a bricklayer, I have never been a farmer or carpenter, I was born with stubbornness. I have never scammed. So, it’s not easy being a stubborn person and still been successful. It’s a big task. I am like a one-million man in one person. Those who know me can testify that Igboho is a powerful being. I have been to every part of the world; I have been to America, Europe. I have my wives and children in America/Germany. It’s not easy doing all these. It’s not easy to use my character in a movie; he used my character to act a movie! He really challenged me but God knows where we will rise to become something in life.

My mother named me Igboho and I asked my mum why she did that. There is a reason why she did it. A lot of people don’t know me, but  because of that my name, when some people hear it they won’t be able to defecate. Even when they want to it will cease to come.

I know that within myself, I am a tough person. I did all these, so I have decided to run for Oyo State governorship post come 2019. Some people don’t know me; they will say Sunday Igboho use to walk in the air but you can’t blame them; they know what they are saying. I, Sunday Igboho, I command guns from no where on the motion if I get infuriated! This is not a film or “action”. My boys can attest to that. Even as I am here, I came fully prepared. If you want to know me, I will show you what I am made of, because where we are today, you can say you want to know what we are made of. I tell people that, when you sleep  you will see us and he will definitely do.”

“My father is late,  May his soul rest in peace. So, when this people (film producers) went to Igboho, my mother told me that some young guys came to Igboho town; they said they want to use Sunday Igboho’s character to act a movie. My mother said, go and   think about it well, but they insisted it was just a movie. My mum also asked if they wanted to be called Sunday Igboho but I said no because she said it’s will difficult for someone to also be called Sunday Igboho but I said they are there to act a movie. I now asked them to pass phone to my mother. I told her (my mother) on phone that they are there to act a movie, not that they want to find out my source of power because not all people can be like you.”

“There are great and powerful men here in our gathering here today but you can’t know them.

It would be hard for Governor to send delegate to honour somebody; Governor of Ilorin sent delegates to come and honour me. I want to open my new house in some months time, a lot of people would be there on that day”.

Mr. Sunday Igboho continued that, if God doesn’t retire me, I would be like this till I am no more. I have a child in Canada, the child will be successful and another one in Germany, he also took after me. One day, he went to school and his teacher beat him up, he asked the teacher if he knows who his father was? I am the son of Sunday Igboho! My dad will come to this school!! You can act like Sunday Igboho in a movie but you can’t be like me because it’s God that made me this way. It’s not easy to become a big warrior and be successful like I have been. It’s not easy. The reason some people can’t be like me is that, for example my friend is being cheated and abused, if you do that, it’s me you have insulted indirectly. So, I will ask my boys to deal with those people. So you see why people can’t be like me” he concluded.

Why My Mum Gave Me The Name SUNDAY IGBOHO was last modified: November 14th, 2017 by Isaac Abimbade

It Has Been Tough Running  My Sports Academy

O ga o! Is this an interview or you took it from the launching of the movie? Because everything you wrote is from the YouTube clip.