Murderer Tried To Break Out Of Jail Dressed As A Woman 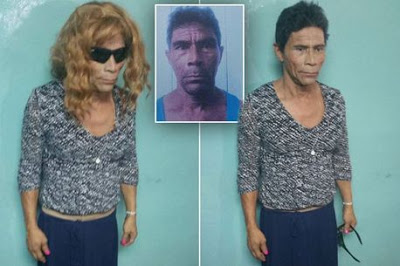 Francisco Herrera tried to break out of jail dressed as a woman with fake boobs and a blonde wig  but soon ran into problems.

The convicted murderer donned a long skirt, wig and fake breasts as he tried to sneak out of a maximum security prison with other lags’ families after visiting hours.

But the 55-year-old killer was caught in his audacious prison breakout when guards noticed he was “walking funny” and “speaking in a man’s voice”. Argueta had disguised himself as a female visitor, Jacinta Elvira Araujo, who had left her identity card with guards as she entered San Pedro Sula, Honduras, and even wore blusher and painted his nails pink.

But the murderer seemingly hadn’t rehearsed his walk or speaking voice and was nabbed when he presented the fake ID card at the jail’s exit.

Argueta, a gang leader known as Don Chico, has been at the jail since September 2015 charged with murder and firearms offences.

Prison officials said he will now be punished for his escape attempt and could be transferred to the notorious El Pozo jail in Santa Barbara, known as Honduras’ most dangerous prison

Murderer Tried To Break Out Of Jail Dressed As A Woman was last modified: May 10th, 2017 by Reporter

9 African countries to get automatic places in world cup