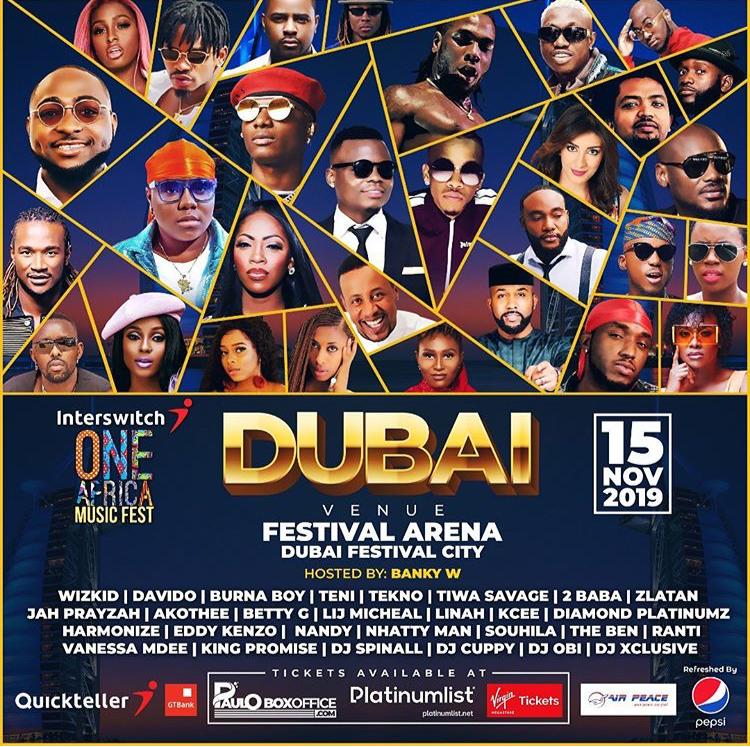 One of Nigeria’s biggest music fest is happening today in Dubai as different celebrities are already headed to the Arab country to prepare for the concert. It is going to be one amazing night that you do not want to miss.  Banky W is playing host to the concert supported by Quicteller, GTBank, Air Peace and Pepsi.

In case you are worried about how to get tickets, you can easily get your tickets on Paul box office, Virgin tickets and platinumlist.net. One of the UAE’s biggest Afrobeats concerts will, undoubtedly, hit Dubai this weekend. One Africa Music Fest 2019 returns to the city on November 15 at Dubai Festival City’s Festival Arena, with more than a dozen acts set to take the stage. Nigerian singer-songwriter, Wizkid, leads the bill. The 29-year-old hit-maker got his start in 2010 with ‘Holla at Your Boy’, the first single from his debut album, ‘Superstar’.

What come next were tracks such as ‘Tease Me/Bad Guys’, ‘Don’t Dull’ and ‘Jaiye Jaiye’. But Wizkid first hit the global music scene in 2016, when he collaborated with Canadian rapper, Drake, on the hit song ‘One Dance’.

The single topped the charts in 15 countries, including the US, UK and Canada. Follow up is Davido a.k.a O.B.O who will also be live on stage, Davido rose to fame after dropping his hit song, Dami Duro and Fall, in 2017.

This year, it became the longest-charting Nigerian pop song in Billboard history. It was also named one of the best 200 songs of the 2010s by Pitchfork. Then, Fellow Nigerian star, Burna Boy, is also heading to One Africa Fest 2019. Earlier this year, Burna Boy was named the Best International Act at the 2019 BET Awards and Apple Music’s Up Next artiste.

He released his fourth album, ‘African Giant’, in July. Burna Boy will also be performing at Sole DXB at Dubai Design District (d3) next month. Meanwhile, Nigerian’s biggest female artiste, Tiwa Savage, will also perform. She relocated from Nigeria to London at a young age and started her career as a backup vocalist for singers such as George Michael and Mary J Blige. She went on to participate in ‘The X Factor UK’.

After graduating from the Berklee College of Music, Savage moved back to Lagos and released her debut album, ‘Once Upon a Time’, in 2013. Last year, Savage was named the Best African Act at the 2018 MTV Europe Music Awards, becoming the first female artiste to win in the category.

Also storming  the stage at One Africa Fest 2019 are: Teni, Tekno, 2 Baba Zlatan, Jah Prayzah, Akothee, Lij Michael, Linah, Diamond Platinumz, Harmonize, Eddy Kenzo, Nandy, Nhatty Man, Soujila, The Ben, Vanessa Mdee, King Promise, DJ Spinal, DJ Cuppy and DJ Obi. Comedians were not left out as several skitters have also landed in Dubai for the big celebration this Friday. Media from Nigeria were also invited to attend the precious event this Friday 15th November. Comedy acts like Josh2funny, Nedu of Wazobia Fm, Craze Clown, Charles Okocha, Mr. Jollof and many more. One Africa Fest didn’t leave the biggest dance act at the moment out. He was also on the same flight to Dubai with the comedians, set to literally set the stage on fire come tomorrow. The event will kick at start at 6pm at the Dubai Festival City’s Festival Arena. More highlights on the event will be given, watch out.