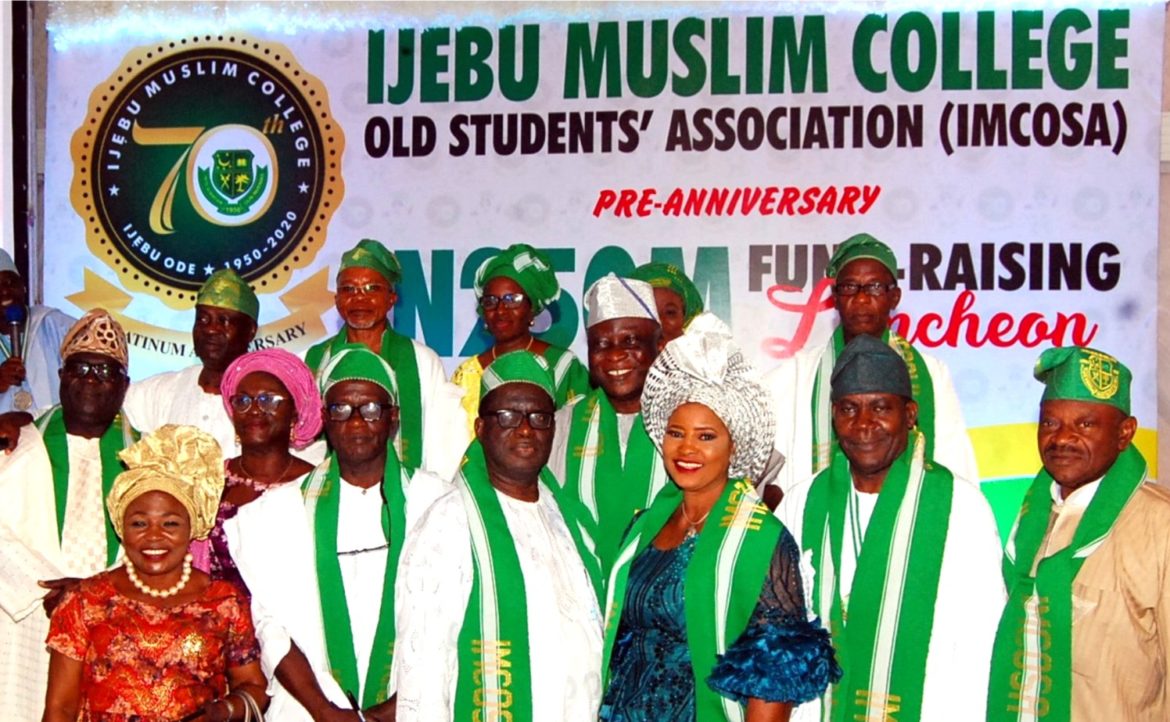 •How The School Was Founded 70 Years

Ever since it’s establishment in 1950, Ijebu Muslim College has always celebrated its founders’ day on a grand scale every  10 years and, therefore, the forthcoming 70th anniversary will not be an exception. However, what has changed in the last 40 years is that Ogun State government took over the school, but has neglected the maintenance of the school infrastructure. Thus, most of the existing infrastructure started to decay owing to old age and lack of maintenance.

In fact, by the time the school attained age 40, the situation had really become very appalling. Decaying infrastructure everywhere and the student population had more than doubled to over 2000!

Therefore, there was acute shortage of accommodation with each classroom then having more than 120 students. Under that situation, IMCOSA decided to intervene in a big way to turn things round for the better. Apart from direct construction of additional classroom blocks and regular supply of furniture, textbooks and other essential educational materials, IMCOSA embarked on massive rehabilitation of many of the old structures. In addition, the association mobilised other stakeholders like the Muslim community led by the imam in council and the PTA to assist which they did. Many corporate organisations equally responded generously to the appeal for help. Such includes,  Globacom Unlimited that donated a well-equipped computer centre.

Messrs Agbami Partners, which equally, donated an e-Library: EXXON Mobile , whose ultra-modern Block of 16 classrooms is now fully completed and ready for commissioning, Waltersmith Petroman Oil Limited, which is constructing a modern science laboratory in the school at present. Despite all these efforts, a lot still remains to be done for the school to cope with the demands of its present students population of over 4,000. Therefore, IMCOSA  plans to carry out the following projects.  Rehabilitation of the old school assembly hall, Construction of 1200-seater dinning hall for students, Construction of 4 bungalows of 12 self-contained flats (2- bedroom each) in staff quarters,  Rehabilitation of remaining old classroom blocks, construction of good drainage and rehabilitation of school road network.

All these cost over #300 million but IMCOSA members and sets have already raised part of the funds, about #50 million thereby leaving a balance of #250 million which they plan to raise as soon as possible.

Ijebu Muslim College, the foremost Muslim institution in the entire Ijebuland, was established in January 1950 and Muslim Girls high school in 1960 for the advancement of higher education for the Muslim youth. The community found it necessary to have  a higher institution of its own to allay the fears of their children being brainwashed into accepting what the Christian Missionary Society (CM) had championed by the establishment of Ijebu Ode Grammar school in 1913. Spear heading the crusade then was the late Alhaji Badaru Daramola a Muslim educated elite, who was then at Portharcourt. He addressed a letter to the entire community in  Ijebu Ode, drawing their attention to the urgent need for secondary school for the Muslim youth in Ijebuland. In this regards, a Muslim secondary school board was formed for the project for the establishment of the school was accepted and a meeting was held on 1st October 1994 at Moslem School, Isoku and the scheme was successfully launched. A budget proposal of #5000 was fixed. Various meetings were held, adequate information went around all and sundry for both moral and financial support.  An appeal fund was raised by prominent Ijebu Muslim scholars and community leaders among them were the late Messers A.O.Ibirogba, R.B Ogunneye and Kadiri Balogun and they volunteered for the historic assignment. They toured the Yoruba-speaking towns to collect funds for the proposed college. With all hands on deck, the college was officially opened in January 1950. The late Mr.  B.A.O Sangowawa was the substantive head holding forte for the first principal, who was being expected from United Kingdom. The first principal, Mr. Amos Ogunkoya despite his Christian background, put the college through the first five years and he was succeeded by the late Alhaji Ambaliyu Olanrewaju Sanni under whose principalship, the college had a higher school certificate course and became coeducational. Ijebu-educated elite who were in the vanguard of Muslim higher education are Pa B. Daramola, who finished up at the Ijebu Ode Grammar school in 1925 and joined the then colonial education department Ijebu Ode as a 3rd class clerk. He was to rise through the ranks years later. He was soon inspired to show keen interest in Muslim western education and initiated the idea of forming a body of committed Muslim adults which was later founded as Ijebu Muslim friendly society in 1927. Notable among the members were the late Pa A.Bashiru, B.O.Ogunneye(Johnson), G.A.Ayeni, A.O.Ashiru, G.Oyelaja and S.T. Rufai. The list also included Pa J.A.Abudu,F.G. Alli, and B.A.Ayeni among others. The group later formed the young boys sections, who were the students among whom were late Pa S.A.Onafuye, Gbadamosi Wellington, M.O.Mebude, S.O.Oyelaja , M.O. Saromi and many others all with the principal aim of establishing Muslim schools, which would save the Muslim children from the forced incessant conversation into Christianity. This led to the founding of the first Moslem Primary School, Isoku Ijebu-Ode on 30th January, 1930, and which rapidly spread all over the then Ijebu province, but these were not without agonising experience for example, for some years after the Moslem Primary School, Ijebu Ode has been founded, all the teachers were Christian, who often threatened to resign en masse on the slightest disagreement with the school authorities.

To get them to soft-pedal, the management had to embark upon systematic training of its own children. In this connection, the late Pa Mebude withdrew his son, the late M.O Mebude after completing class IV at the Ijebu Ode Grammar school, to go for the Higher Elementary Teachers Grade II. Similarly, the late Pa R.B.Mosuro withdrew Mr L.K. Mosuro after completing class II at the Abeokuta Grammar School, to go for the teachers grade II course. The late Messers M.O. Bakare, M.O. Balogun and M.O. Abdul among others became the education officers and were so sympathetic to the principal of government teachers training college Ibadan to reserve, at least, four places for Muslims in the schools not only in Ijebu Area, but also all over the then Western Nigeria, such as Lagos, Abeokuta ,Ibadan, Oyo, Ilesa etc. A big problem arose for primary schools leavers to gain admission to secondary school. In the then Ijebu province the Ijebu Ode Grammar school established since 1913, the Remo Secondary School, the OluIwacollege respectively, could not contain the problem. The founding of a Muslim Secondary School thus became an urgent necessity.

Ijebu Muslim College, Ijebu Ode (IMC) was established in 1950 by the Ijebu Muslim Community at the old site along Olisa Street, Ijebu Ode, Ogun State. It was the first Post Primary Muslim school in the Old Ijebu Division of the then Western Region of Nigeria.

The school started off as a ‘boys only’ institution with 60 boys, but became co-educational in 1965. It moved to its present expansive site along Ijebu Muslim College road (formally Lagos –Benin) road in 1953. The school consistently had impressive performance in the early years and in 1961, became the first school in Ijebu province to offer students Higher School Certificate (HSC) course in science subjects also with enviable –results. It recorded the best all round results in the HSC examinations in 1971 in the old western region.

The school thus became a “Mecca” for students at higher school certificate level throughout the country, especially those in science subjects. Notwithstanding that the founders were all Muslims, they went for the best in terms of staff and students irrespective of religion, tribe or background. Thus, the first principal, Pa Thomas O. Ogunkoya was a catholic, and some of the pioneer members of staff were non -Muslims and non Ijebus. The tradition of unity in diversity and peaceful coexistence endures till date as the college’s gate remains open to all from diverse backgrounds, beliefs and colours.

Efforts are now being made to sustain this legacy by both the current staff/students as well as IMCOSA members who have benefitted immensely from the school. In year 2012, the principal of the senior school, Alhaja M.F Kareem, won the best principal award, while IMCOSA was also given the best prize as the most virile old students association in Ijebu Division of Ogun State.

As at today, the school occupies over 50 acres of land, it can boast of several blocks of classrooms, science laboratories, computer rooms, hostel facilities and Ultra Modern Ambaliu Sanni Administrative Complex ( courtesy of IMCOSA).

However, most of the existing infrastructure facilities have decayed, owing to old age, apart from being very inadequate to cope with increasing student’ population. Therefore, in line with her tradition, IMCOSA has packaged a lot of projects to celebrate the 70th anniversary to address the yawning infrastructural gap. Such projects include redevelopment of the Old School Assembly Hall, construction of a new dining hall for, at least, 1000 students at a sitting, building of New Science Laboratory, construction of drainage and road network, repair of all dilapidated classroom blocks etc, all of which are estimated to cost about #250 million.