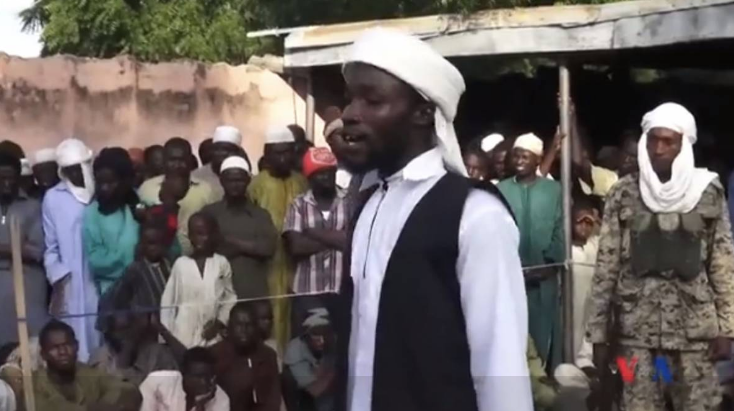 The Muslim Rights Concern (MURIC) has criticised US President Donald Trump’s comments on the killing of Christians in Nigeria.

During a joint press conference with President Muhammadu Buhari on Monday, Trump said the US will not accept the attacks on Christian communities in Nigeria.

Reacting to the US president’s position, MURIC urged Nigerian Christians to “not allow themselves to be deceived by Trump”.

The Muslim group said Trump misfired by making the statement and alleged that he “is only using religion to turn Nigeria into another Iraq”.

MURIC warned Nigerian Christians against “swallowing Trump’s bait”, else the West African sub-region will “be shaken to its foundation”.

Akintola said Trump, by virtue of the comment, “is luring Nigerian Christians into bolder confrontation” with Muslims.

“It is sheer interference in the internal affairs of a sovereign nation. Trump has a bully’s instinct,” the statement read in part.

“If this is the same Trump who called African countries ‘shithole’, the same American president who threatened to wipe out North Korea, the same US leader who banned Muslims from entering his country, the same Republican who said, “Torture works, ok folks?”, Nigerians must be wary of America’s involvement in their affairs.

“We should remember that Nigeria did not get the required support from the moderate and cool-headed Barrack Obama in its war against terrorism. We should therefore not expect any from Trump who treats vulnerable nations with contempt and has no respect for African countries. Unless Nigerians unite, this country will become America’s ‘shithole’.

“Trump’s comment on killings in Nigeria implies that he would prefer that it is Muslims alone who are being killed. We refuse to believe that a whole American president does not know the true situation on ground in this country. He who knows but pretends not to know has his own secret agenda. Nigerian Muslims are not intimidated by Trump’s comment. We only sympathise with those who will be gullible enough to become Trump’s ‘suckers’. Posterity will judge us.

“Nigerian Christians should not allow themselves to be deceived by Trump’s comment. The advanced countries of today will not compromise the secret of their technological advancement. Western countries will not teach us what will benefit our people. They will only teach us what will divide us in order to further render us debilitated, impoverished and helpless.

“Nay, they will give us fish but refuse to teach us how to fish. They will scatter us like wild oats and then give us weapons to kill ourselves. Then, under the guise of rendering humanitarian services, they will take over our land, our oil, our rich culture and force homosexualism and lesbianism down our throats but at that time, it will be too late to resist. Mark our words.

“Trump is only using religion to turn Nigeria into another Iraq. Just as former US President Bush used Sunni-Shiite dichotomy to destroy Iraq just to lay his hands on Iraq’s oil field, Trump is also eyeing Nigeria’s oil. His plan is to use Christian-Muslim divide to set Nigeria ablaze. But Nigerians should remember that decades after the invasion of Iraq, that country is yet to experience stability. Years after the killing of Ghadaffi, Libya is yet to find its feet. The guns are still booming in Syria and the world holds its breadth each time North Korea sneezes.

“It is our contention that Trump is luring Nigerian Christians into bolder confrontation with their Muslim neighbours. We warn that the West African sub-region will be shaken to its foundation if Nigerian Christians swallow Trump’s bait. The extension to Nigeria of America’s crusade which brought ruins to Iraq, Syria, Afghanistan, Libya and Sudan will have dire consequences on the whole African continent.

MURIC urged the federal government not to rely on US support to tackle the security challenges in Nigeria and also warned against a military alliance with the US.

READ ALSO: DETAILS OF WHAT BUHARI DISCUSSED WITH TRUMP [READ]

Muslim Group Vows To Turn Nigeria To Iraq If… was last modified: May 1st, 2018 by Damilare Salami

Details of What Buhari Discussed With Trump [READ]