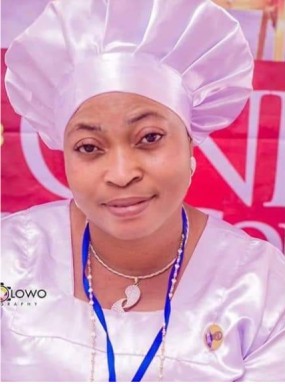 Late SBJ Oshoffa was the founder of the Celestial Christian Church. He died a few years ago, and many of his children are doing well in their different fields of endeavour. One of them is this pretty woman, Mrs Deborah Oshoffa-Ogunbiyi, who is a successful Lagos businesswoman. She is the junior sister of Sup Evangelist, Tosho Mathew Oshoffa (popularly called TMO), the new Shepherd-In-Charge of CCC International Headquarters in Ketu. She is also a devoted member of the church and her husband is also a member of the Celestial Church. She was born into the C church in Port Novo before her dad relocated to Nigeria.

On Sunday 3rd February 2019, City People Publisher, SEYE KEHINDE interviewed her at the Ketu church, during which she spoke about her life as Oshoffa’s daughter. Its very interesting. Below are excerpts of the interview.

Tell us about Deborah Oshoffa? Who is she?

How does it feel being an Oshoffa?

Its like a dream come true. Its like a priviledge that is rare because our father left a name which 34 years after he left us the name has continued to bring honour to us. Whereever we go and people see us, they always transfer the honour and pride they have for him to us, we the children. And as part of our duties as children we have been able to maintain that name because our father gave us something more than gold and silver. He didn’t leave us a big estate. He didn’t leave us money in the account, but he left us a name. And the name has been able to open doors for us.

When you were young what was you relationship like with your dad?

Oh. I was very close to him. He died when I was 12 years old. I had a personal relationship with him because he used to refer to me as his mother. He used to say I look like his mother. I was the only one he allowed to go to a Boarding House. I went to Federal Government College, Lantang, Plateau State.

I don’t know why. My sister had an admission to FGCC, Yola. He didn’t allow her to go, but he allowed me to go. I had this type of relationship with my dad. In the morning, he had this person who used to interprete newspapers for my dad. There was this morning, the man came late and I told my dad to let me read and interprete. I was 10 years old. My dad said no. He said I am too young that I wouldn’t be able to read and interprete it.

I said no. I will. So what he did was, he asked them to bring the daily newspapers and I read them in English and I interpreted them. My father said I should sit down. He said he won’t let me go until the person interpreting for him comes.

When the man came, it was exactly the way I interpreted it to my dad. My dad was very proud of me. He told everybody that I have a Professor, my money is not wasted. We had a dad who had so much interest in our education. He wasn’t well read, but he wanted the opportunity of education for his children. He didn’t care if you were a boy or . All he wanted was education. I grew up knowing a dad who loved everybody in the community. I had friends we grew up together. They will come in the morning, and my daddy will share money to everybody. He doesn’t want to know if you are his child or not. His own is anybody coming, let them come. He was humble. My dad had something I have not seen in many people. He had humility. He was humble to a fault. Many of our Pastors don’t have half the gift God gave Baba. But yet Baba remained humble. He was jovial. If you see him talking among his lieutenants, if you don’t know him before, you will be looking for the founder. You will be wondering if he’s the one? This is because he jokes a lot. When he eats, he does not finish it.  He loves eating and leaving the remaining for the people. He loves to share. Even after his death, we hear stories of how he has helped many people. He sowed into peoples lives. And we his children have been able to reap. I have a younger brother that was looking for a job and he got to an office and immediately they just saw his C.V. the MD asked him: are you Oshoffa’s son?

He said yes. The MD said I have employed you. Reason? He said his father didn’t know me, but his father paid my school fees throughout his university and Papa didn’t know his parents. Those are the things we are enjoying. We are just trying our best to keep up with his legacy as a family.

Lets talk about your educational background?

After I left Lantang, I went to Ogun Polytechnic. I studied Mass Communication. That is where I stopped before I got married. Now, I am into Event Planning. I have a security company. I just left an event at National Stadium. I have 15 guards working there now at an event taking place there. I am into private security contracts. I am also in Philanthropy. We lost my mum 3 years ago. Mrs Elizabeth Oshoffa popularly called Iya Middle. She was the most senior wife in Nigeria. After she died, I decided to set up an NGO in remembrance of her. So it’s like a foundation. Its called The Tabitha Foundation where I cater for the less privileged. But I don’t make a noise about it. I don’t carry cameras with me when I am going out to give them gifts. I want whatever I do to be between me and God. So whenever I am going to sew seeds into peoples lives, I don’t go with cameras. I don’t put it on any social media. It better that way, we don’t need peoples praises to sew seeds.