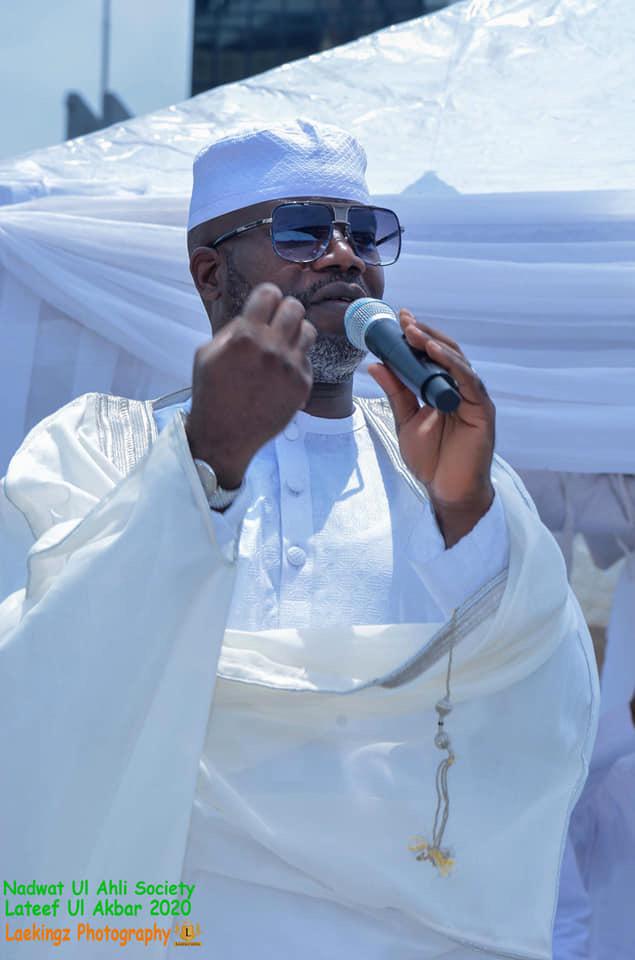 Last Sunday was a day to remember, as NADWAT global family held its annual spiritual gathering at the mainbowl of Tafawa Balewa Square (TBS) in Lagos Island Nigeria.

It’s the 9th edition of the gathering called Lateeful-Akbar (seeking help from the greatest). It is very significant to the organisation and its devotees as they believe in the efficacy of the supplication made at the spiritual gathering. Those who have witnessed the previous editions of the gathering have lots to say and always look forward to the yearly event.

This year’s gathering was so massive that it was witnessed by thousands of devotees from home and abroad all dressed in white attires, as the nature of the event demands. Some were physically present at the venue, while others took part through various social platforms provided by the organisation.

Citypeople was at the epoch event. Below is the blow by blow account of what happened at the NADWAT annual spiritual gathering for those seeking divine and uncommon grace.

ARRIVAL OF GUESTS AND MEMBERS
As early 6am on the day of the event, Tafawa Balewa Square and its environs on the Island had started seeing signs of something great, as different vehicles from far and wide are heading toward the historic venue. What was so glaring to every eyes was that symbolic white attires worn by the congregation who were trooping into the TBS. By 10am the venue was almost full to the brim, as members and lovers of NADWAT were at the annual spiritual gathering ,ready to seek divine uncommon grace.

ASALATU SESSION
It’s in the DNA of the NADWAT global family to always begin their events with prayers. The annual spiritual gathering of the day did not fall short of that as the Asalatu prayer session was done as the first point of call. Members and guests were taken through series of prayer sessions during the Asalatu.

THE BABA ADINNI’S WELCOME SPEECH
The Baba Adinni of NADWAT and former commissioner for Home Affairs in Lagos State welcome members and guests to the annual spiritual gathering after which he sang lot of songs of praises to Allah for sparing the lives of those present at the programme, despite the havoc COVID 19 wrecked in the world, Nigeria and particularly Lagos state. He however assured them that coming to this year’s event would be a great testimony for them as some who attending the previous editions can’t stop appreciating God’s doing in their life through the Lateeful Akbar gathering.

ZIKRI SESSION
The Zikri session was quite full of fun as every person present at the event were fully engaged in singing and dancing to remember, praise Allah and by extension connecting their minds and souls to their creator. This exactly is what the session was to achieved. At intervals, you would see devotees stand on their feet, some jumping and some sitting down to praise God. Following the Zikri was a prayer session where the chief missioner, Dr. Abdur Rahman Lawal admonished audience on why it’s important to seek uncommon favour from God. He therefore sited an example of how a goat was thrown into the lion’s den as a prey but eventually turned a friend to the lion.

LATEEF-UL AKBAR PRAYER SESSION
This is one of the peak moments of the event. It’s the major reason while devotees have travelled from far and wide to have the prayer session. It was a two Rakaah solat but loaded with lots of supplications. This session was spearheaded by the Chief Missioner of the organisation. After that the congregation embarked on an individual but cumulative supplication of Yah Lateef which was estimated at about 40million. Participants online also took active part in reciting the Yah Lateef supplication.
Another form of prayer was recited as the congregation was told to get sealed bottle water each. After the prayer was said they were told to drink the water for it’s capable of healing many health challenges in the body.

THANKSGIVING
This is another pillar of the annual spiritual gathering where those who attended the previous edition to come forth to appreciate the improvement they have witnessed in their life over the year. A large number of people came out to showcase the remarkable progress they have made between last year and now. Evident seen are those who brought their babies, pregnancy, car keys and lots of gift items in appreciating the organisation for the impact the annual gathering has done in their lives.
The second part of the thanksgiving was done according to the days of the week where those born on each day came out to give their offerings. The exercise was fun and well organized.

MODIU NABBIYY
This is a special session dedicated to praise Prophet Muhammed (SAW). It was anchored with a sonorous and captivating voice of the scholars which got everybody who is at the event to sing along with him.

Top Islamic singer also referred to as ‘Sheikha of Music’, Rukayat Gawat gave a stellar performance at the event as she trilled audience with a number of her top Islamic songs spiritually loaded with melodies. To complete her song was the beating of the highly spiritual Bandiri drum which further added fun to her performance as some of the congregation danced with joy.

SHOWCASE OF THE OVER 300 YEARS OLD MIRACULOUS QURAN

The Chief Missioner of NADWAT spoke about how power a book the Quran is. Particularly he spoke extensively about the Quran in his hand which he said is hand written and has been in use for 367 years now. He said he’s the fourth generation of those used the Quran and testified to its efficacy. He however enjoyed the large congregation to point to the Quran he was holding and demand for their most pressing needs as he assured them their request would be granted.

NOTABLE DIGNITARIES AT THE EVENT
The annual spiritual gathering witnessed the presence many dignitaries across board all dressed in their sparkling white attires. There are quite a number of them who travelled down to Lagos to be part of the gathering are some were observing from distance through the various social media platforms provided by the organisation. Notable among the individuals who were physically present at the event are the executive chairman of Lagos Island East Local Council Development Area, Comrade Kamaldeen Salau-Bashua, former Lagos State Commissioner for Home Affairs and Culture; Alh. Muhammad Bello Oyinlomo Danmole, Iya Adinni of NADWAT; Alhaja Femi Sulaimon,
Alhaja Shukurat Shine Shine, Alhaja Kuburat Akinyede(kubitex ),
Alhaja Morayo Seriiki( Kadmos Stores) while NOLLYWOOD Celebs; Fathia Balogun Williams and Mustapha Sholagbade were also seen at the event.

Sheikh Dr. Abdur Rahman Adeyanju Lawal is the Chief missioner and founder of NADWAT UL AHLI WOLRDWIDE.
He obtained first degree from Al Azhar University in Cairo with Arabic Language B.A Hons., as well as second and third degree in Mass Communication from University of Lagos. He is highly intellectual in Islamic discussion; fluent in Arabic, English and Yoruba Language. He is also known as Shaikh of Lagos.
The following scholars are members of his team in the propagation of what NADWAT stands for:
Imaam Shakir Olawale
Al-Ameen Missioner, Ikoro Branch
Assalat Praying Ground Beside Narrow Way Primary School,
Shagamu Road, Ikorodu, Lagos