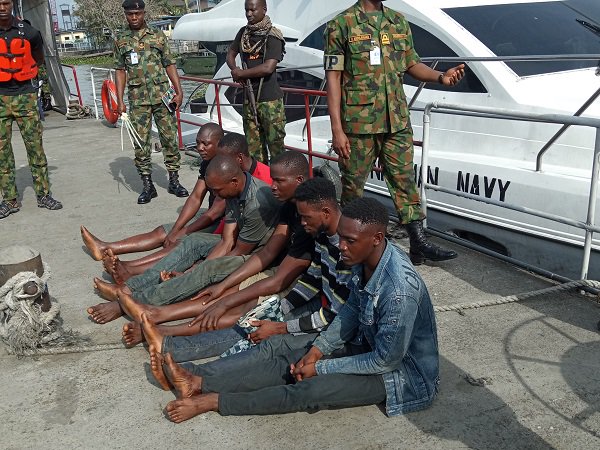 The Nigerian Navy Ship (NNS) Delta, on Friday handed six suspected oil thieves and seven loaded Cotonou boats over to the headquarters of the Operation Delta Safe (OPDS) for further investigations and prosecution.

Giving details of the handing over exercise to journalists at the NNS Delta’s base in Warri, the Commander of the NNS Delta, Commodore Ibrahim Dewu, also revealed that the suspects were arrested with products suspected to be illegally refined diesel, also known as AGO of an estimated quantity of 540,000 liters.

Commodore Dewu, who was represented by the Executive Officer (XO) of the NNSDelta, Navy Captain Adeyemi Adewuyi, said the suspects were arrested on Wednesday, 6th of March, 2019 and that the product was said to have been procured from Opudebubo Creek in Warri South-West council area of Delta state.

He, however, warned those involved in illegal activities in the maritime environment with the NNS Delta’s area of responsibility (AOR) to desist or face the law as the Nigerian Navy would not relent in its efforts to make the Niger Delta safe and fit for legitimate activities.

“This morning we are handing over seven Cotonou boats that were arrested on the 6th of March to appropriate security agencies. The boats were arrested at Opudebubo Creek in Warri South-West council area of Delta state. According to the suspects, they came all the way from Igbokoda in Ondo state to buy the products from the creek. They said they were taking the product to Igbonla in Okitipupa in the Igbokoda area of Ondo state.

“The quantity is estimated at 540,000 liters of AGO, illegally refined. We managed to arrest six suspects. The original number of the Cotonou boats was 8, however, one of them sank at the point of arrest, due to leakage. Investigation is still on and that’s why we are handing them over to the appropriate prosecuting agency for all other facts to come out.

“I want to use this opportunity to warn all the criminals like pipeline vandals, to desist from their nefarious ways. Nigerian Navy will not relent in her efforts to stamp out criminality in the creeks of the Niger Delta”, he said.

Meanwhile, when asked for his team’s mission in the area where they were arrested, one of the suspects, who identified himself as Odusola Irewole said he was a first timer in the illegal business, adding that he was pushed into it by lack of gainful employment.

“We came from Ondo state on the 6th of this month to buy diesel in Opudebubo Creek. I don’t know the seller because I’m just a worker in the boat. The owner of the business is Femi Jafo. He’s in Ondo state now. This is my first time because this boat is a new boat. I’m doing this job because there’s no job anywhere else, nothing to survive on. I didn’t know it was illegal, it is now that I’m getting to know”, the suspect said.