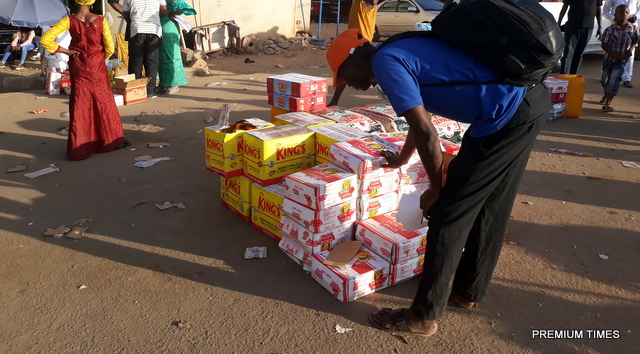 While the Internally Displaced Persons (IDPs) across camps in the country are going hungry daily, officials of the National Emergency Management Agency (NEMA) were seen on Sunday sharing food items to the agency’s staff.

An August, 2019 report of the Food and Agriculture Organisation of the United Nations, titled “Monitoring food security in countries with conflict situations,” states that during the 2019 lean season (June–August), around 3.6 million people were in need of urgent assistance in the four subnational areas of the Lake Chad Basin.

But this scary figure appears not to have deterred officials of NEMA, who shared food items amongst themselves on Sunday.

A staffer of the agency, who for fear of retribution prefers anonymity, told PREMIUM TIMES the exercise is nationwide.

“The items are being distributed to all NEMA staff across the country. The items for the zonal and territorial offices have started arriving,” the source said.