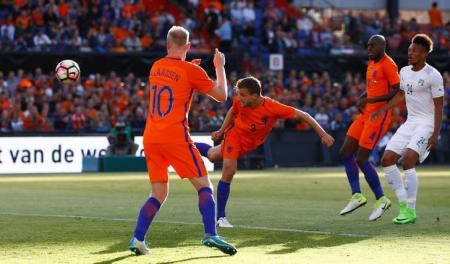 Defender Joel Veltman scored twice as the Netherlands found form with a record 5-0 win over Ivory Coast in their international friendly in Rotterdam on Sunday.

Goals from Arjen Robben, Davy Klaassen and Vincent Janssen compounded the misery for the Ivorians, who suffered their heaviest ever defeat in international football.

The result is a boost for returning Dutch manager Dick Advocaat, who takes over the side from caretaker Fred Grim after this fixture and is hoping to bring confidence back to the team as they look to rekindle their World Cup qualification campaign.

The match provided the perfect build-up to their next qualifier against Luxembourg at the same venue on Friday.

The Dutch are fourth at the halfway stage in European Group A with seven points from five matches, six points behind France, three behind second-placed Sweden and two short of Bulgaria.

Veltman netted the opener on 13 minutes when he was left unmarked at a corner and stooped to head past Ivorian goalkeeper Badra Ali Sangare, one of two home-based players in their squad.

The Netherlands were given an opportunity to double their advantage when Janssen was up-ended in the box by Sangare and Robben converted the penalty.

Veltman’s second also came from a corner as the ball was played short to Robben and his in-swinger to the back post was guided home by the defender.

Gaping holes were beginning to appear in the 2015 African champions’ defence and when Janssen got to the byline and pulled the ball back towards the penalty spot on 69 minutes, Klaassen was all alone to side-foot the ball into the net.

It was 5-0 six minutes later when Janssen grabbed the goal his performance deserved as Sangare could only parry a shot from Georginio Wijnaldum into his path, and the Tottenham Hotspur forward buried the rebound.

Ivory Coast manager Marc Wilmots will expect much better when they host Guinea in an African Nations Cup qualifier on Friday.

A Quick Guide On Sex During Your Period