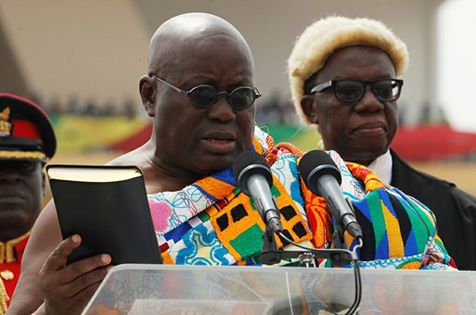 Many don’t know that the new Ghanaian President, Nana Akufo –Addo was once married to a pretty Nigerian woman called Remi Fani-Kayode. She is former Aviation Minister Femi Fani-Kayode’s elder sister. Both Nana Akufo-Addo and Remi both lived in Paris together for many years. She moved back to Ghana with him and stayed there until the marriage broke down irretrievably. And they divorced many years ago. They have 2 daughters. He has since remarried. He is married to Rebecca (popularly called Becky) Akufo-Addo (nee Griffiths-Randolph). They have 5 daughters and 5 grandchildren.

Who is this 73 year old called, Nana Addo Dankwa Akufo-Addo?   He is  a Ghanaian politician from Kyebi and Akropong-Akuapem in the Eastern Region. He is the new President of Ghana. He ran for Presidency of Ghana in the 2008 and 2012 presidential elections as the New Patriotic Party (NPP) candidate, but was defeated both times by the NDC candidate: John Atta Mills in 2008 and John Dramani Mahama in 2012. He was chosen as the NPP’s flag bearer for a third time in the 2016 elections and defeated Mahama in the first round (winning 54% of the votes). He will be sworn in as as the fifth President of the Fourth Republic on 7 January 2017. He previously served as Attorney General from 2001 to 2003 and as Minister for Foreign Affairs from 2003 to 2007.

Akufo-Addo was born in Accra, Ghana, to a prominent Ghanaian royal and political family as the son of Edward and Adeline Akuffo-Addo. His father was Ghana’s third Chief Justice from 1966 to 1970, Chairman of the 1967-1968 Constitutional Commission and the non-executive President of Ghana from 1970 till 1972.  Akufo-Addo’s maternal grandfather was Nana Sir Ofori Atta, King of Akyem Abuakwa who was a member of the Executive Council of the Governor of the Gold Coast before Ghana’s independence. He is a nephew of Kofi Asante Ofori-Atta and William Ofori Atta. His great-uncle was J. B. Danquah, another member of The Big Six.

He started his primary education at the Government Boys School, Adabraka, and later at the Rowe Road School (now Kimbu) both in Accra Central. He went to England to study for his O-Level and A-Level examinations at Lancing College, Sussex. He began the Philosophy, Politics and Economics course at New College, Oxford in 1962, but left soon after. He returned to Ghana in 1962 to teach at Accra Academy Secondary School, before going to read Economics at the University of Ghana, Legon, in 1964, earning a BSc(Econ) degree in 1967. He subsequently studied law in the UK and was called to the English Bar (Middle Temple) in July 1971. Akufo-Addo was called to the Ghana bar in July 1975. Akufo-Addo worked with the Paris office of U.S. law firm Courdet Freres. In 1979, he co-founded the law firm Prempeh and Co.

Akufo-Addo’s participation in politics began in the late 1970s when he joined the People’s Movement for Freedom and Justice, an organization formed to oppose the General Acheampong-led Supreme Military Council’s Union Government proposals. In May 1995, he was among a broad group of elites who formed Alliance for Change, an alliance that organized demonstrations against neo-liberal policies such as the introduction of Value Added Tax and human rights violations of the Rawlings presidency.

The broad based opposition alliance later collapsed as the elite leaders jostled for leadership positions. In the 1990s, he formed a civil rights organization called Ghana’s Committee on Human and People’s Rights.

In October 1998, Nana Akufo-Addo competed for the presidential candidacy of the NPP and lost to John Kufuor, the man who eventually won the December 2000 presidential election and assumed office as President of Ghana in January 2001. Akufo-Addo was the chief campaigner for candidate Kufuor in the 2000 election and became the first Attorney General and Minister for Justice of the Kufuor era before he was later moved to the Ministry of Foreign Affairs and NEPAD.

In 2007, the former Attorney-General and Foreign Affairs Minister was the popular candidate tipped to win NPP’s presidential primaries. In 2008, Akufo-Addo represented NPP in a closely contested election against John Atta Mills of NDC. In the first round of voting, Akufo-Addo tallied 49.13%, leading Atta Mills with a slim margin that was below the constitutional threshold of 50% to become the outright winner.

Akufo-Addo again was NPP’s presidential candidate in the 2012 national elections against major rival NDC’s John Mahama, successor of Akufo-Addo’s previous rival, the late Atta Mills. Mahama was delcared the winner of the election, an outcome that was legally challenged by Akufo-Addo. The court case generated considerable controversy, and was finally decided by the Ghana Supreme Court in a narrow 5/4 decision in favour of Mahama. Akufo-Addo accepted the verdict in the interest of economic stability and international goodwill.

In March 2014, Akufo-Addo announced his decision to seek his party’s nomination for the third time ahead of the 2016 election. In the NPP primary conducted in October 2014, he was declared victor with 94.35% of the votes.

Akufo-Addo also served as Chair of the Commonwealth Observer Mission for the South African elections in 2014. On November 30,  Akufo-Addo received the endorsement of the All People Congress in Ghana’s Northern region. He focused his campaign on the economy, promising to stabilize the country’s foreign exchange rate and reduce unemployment levels. On 9 December 2016, sitting president John Mahama conceded defeat to Nana Akufo-Addo.

7 Nigerian Pastors That Were Accused Of...