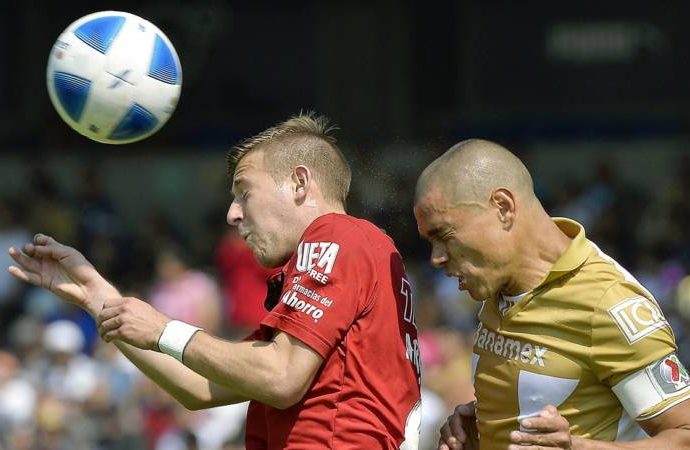 Footballers who repeatedly head the ball can end up suffering from dementia, new findings have suggested, prompting calls for more research into a long-suspected issue in the sport.

A potential cause of dementia thought to arise from blows to the head has, for the first time, been confirmed in a group of retired footballers following a small study.

The results provide a platform for a “pressing research question” on whether dementia is more common in footballers than the general population, the authors said.

Dawn Astle, daughter of former England and West Brom striker Jeff Astle, who died of a degenerative brain disease in 2002 aged 59, said such findings are no surprise.

She expressed her frustration that there has not been more research done on the matter in the years since her father’s death, and criticised a perceived lack of action by footballing authorities as “indefensible and disgraceful.”

She said: “The evidence is mounting. It is sad to read — I am not surprised, it doesn’t shock me at all.

“It’s too late for Dad. The research is so important for current players and for future players. That’s why we need it. I think that’s what is so very frustrating — the fact that it’s nearly 15 years since my dad died. And the fact that nothing from any footballing authorities has been done.

“It is really indefensible and disgraceful. It really is. This isn’t arthritis or a bruised leg or a broken leg. People are dying. This is killing people.”

The brains of six of the 14 retired players involved in the research — none of whom have been identified — underwent post-mortem examinations and four were found to have chronic traumatic encephalopathy (CTE) pathology, while all six had signs of Alzheimer’s disease.

CTE can cause dementia and, like Alzheimer’s, is characterised by a buildup of abnormal tau protein in the brain.

The rate of CTE detected in the footballers’ brains was greater than the 12 percent average found in a previous study which looked at 268 brains from the general population.

The results show more research is urgently needed in the area, Professor Huw Morris of UCL Institute of Neurology said, but he cautioned the risk for people who enjoy playing football in their spare time is likely to be low.

He said: “We do not yet know exactly what causes CTE in footballers or how significant the risk is.

“Major head injuries in football are more commonly caused by player collisions rather than heading the ball.

“The average footballer heads the ball thousands of times throughout their career, but this seldom causes noticeable neurological symptoms.”

He added: “Of course, any kind of physical activity will be associated with health risks and benefits and it is well-established that playing sports can significantly improve physical and mental health.”

Of the risk to people who may step out for a kickabout in the near future, he said: “I think the risk is extremely low of playing recreational football.”

The ex-players involved in the study, 12 of whom eventually died of advanced dementia, all began playing football and heading the ball when they were children or teenagers and continued for an average of 26 years.

They were all referred to the Old Age Psychiatry Service in Swansea, Wales between 1980 and 2010.

Consultant psychiatrist Dr Don Williams, who ran the study from the Swansea service, said he was motivated to do so after being approached by a man whose footballer father had been diagnosed with dementia, and who wanted to know if headers could be the cause.

He said: “As a result, I looked out for men with dementia and a significant history of playing soccer, followed them up and where possible arranged for post-mortem studies to be carried out.

“The results suggest that heading the ball over many years, a form of repetitive sub-concussive head injury, can result in the development of CTE and dementia.

“Thus the original suggestion has been shown to be of merit and worthy of further investigation.”

The scientists acknowledged the size of the study was small, and appealed to people to remain open-minded when it comes to presenting themselves for research.

Prof Morris said: “I think people being involved in research is a good thing and would encourage people to consider that.”

Dr Helen Ling, lead author of the UCL Queen Square Brain Bank study, said the research, published in the journal Acta Neuropathologica and funded by The Drake Foundation, is important but added more is needed for definitive results.

“Previous studies have shown that the risk of Alzheimer’s disease is increased in people with previous head injuries.

“On the other hand, the risk of dementia is also increased with age and we don’t know if these footballers would have developed Alzheimer’s disease anyway if they hadn’t played football.

“The most pressing research question is therefore to find out if dementia is more common in footballers than in the normal population.”

The Football Association’s head of medicine, Dr Charlotte Cowie, said: “We welcome this research and the new study is the result of a very dedicated group of researchers working hard to develop further understanding in this area.

“The Football Association takes the concerns around concussion and head injuries extremely seriously.

“In 2015 we established an expert concussion panel which led to the publication of the FA concussion guidelines.

“These guidelines were designed to help recognise and manage concussion — from the time of injury through to a player’s safe return to football.

“The expert panel further agreed that research is particularly required into the issue of whether degenerative brain disease is more common in ex-footballers.

“The FA is determined to support this research and is also committed to ensuring that any research process is independent, robust and thorough, so that when the results emerge, everyone in the game can be confident in its findings.

“To this end, we have recently agreed with the PFA [Professional Footballers’ Association] to jointly fund the research project as we believe that a collaborative approach will strengthen the credibility and resource available to the project.”

New study finds potential link between dementia and heading in football was last modified: February 15th, 2017 by Arinze Ago