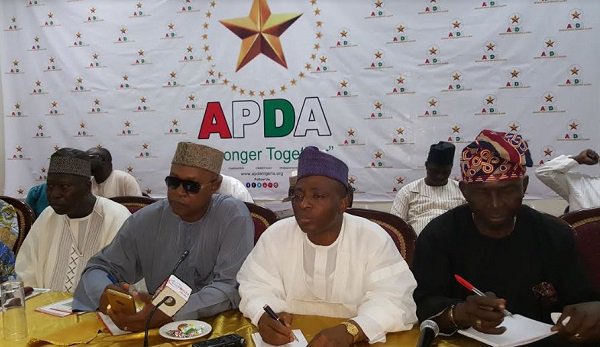 A fresh report surfacing in the media has revealed that a leadership crisis has erupted in the newly-registered Advanced Peoples Democratic Alliance (APDA).
This crisis was followed by the suspension of three of its key leaders with immediate effect on Tuesday.
Amongst those suspended is the owner of the African Independent Television, AIT, Raymond Dokpesi, while others include Dan Nwayanwu and Mainassara Ilo.
Mr. Nwanyanwu is a former national chairman of Labour Party (LP).
Their suspension was announced via a statement on behalf of the national working committee by the National Secretary, Emeka Okengwu.
The action followed the sack of the party’s national working committee earlier on Tuesday by the national executive committee.
APDA was registered alongside four other associations as political parties by the Independent National Electoral Commission (INEC) on June 7, two days after it was publicly launched.
Messrs. Dokpesi, Nwanyanwu and Ilo trio was accused of holding “illegal” national executive council meeting of the party during which they suspended the national working committee.
The statement reads: The newly registered political party, the Advanced Peoples Democratic Alliance National Working Committee has suspended Raymond Dokpesi, Dan Nwanyanwu, and Mainasara Ilo for unlawful gathering in the name of the party and violating the constitutional provision of the party for holding illegal National Executive Council meeting sacking the National Working Committee of the party.
“Raymond Dokpesi on the 15th of July wrote a letter to Independent National Electoral commission informing them of a proposed NEC meeting and this letter was signed by him as BOT chairman but INEC responded by telling him to root his letter through the National Chairman of the party because the constitution of the party does not have a BOT until after five years.
“In their desperation move to factionalize the party and move to PDP they went ahead to make this announcement constituting an illegal Board of Trustee and sacking of National Working Committee.
“Due to this indiscipline of these members, the NWC met at an emergency meeting today and suspended them and constituted a Disciplinary committee to sanction them for bringing disrepute to the party.
“We want to appeal to the general public to disregard their announcement because they are agents of PDP trying to destroy the emerging alternative party that will give Nigerians a better life.”
Mr. Dokpesi, a known member of the Peoples Democratic Party, which he aspired to lead until May 2016 when it was thrown into leadership crisis, could not be reached for comments.