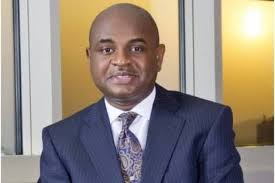 After months of soul-searching, the former Deputy Governor at Central Bank of Nigeria (CBN) Prof. Kingsley Moghalu has pitched tent with Young Progressive Party( YPP), the party on whose platform he’s vying his presidential ambition next year.

If elected, he promised to enthrone innovative based economy, restructure the country for regional prosperity and effective budget system .

He had, February this year disclosed his interest to run for presidency but kept mute on the political platform until yesterday.

Addressing party faithful in Abuja, the former Deputy Governor of CBN said after a thorough, painstaking diagnosis of all available political parties, he decided to settle for YPP because, according to him, the party answered all his questions in affirmative.

” I thought about why I have joined politics- the imperative of a radically new political leadership for Nigeria, one with a vision and the capacity to build a new and different future for our country. That meant almost automatically that I would not be part of the old order of failed and recycled politicians that have run pur country with poverty, insecurity and corruption as our Natio legacy “.

” Would the party I would join share my vision of leadership as one of service and accountability? Would it be focused on the youth and our future while inclusive in its membership?. Would it be nation- wide in its spread and appeal as opposed to an ethnic and sectional focus? And would the party, from the standpoint of electoral strategy, be a viable platform with a structure to prosecute the struggle for a new Nigeria that is focused on the future and not the past?”, he prodded.

Moghalu said once he was through with all the thinking, he knew he was ready to choose the Young Progressive Party, a party he said fitted in to all he wanted to achieve for Nigeria.

He said other parties, especially PDP and APC, were fusion of old and same politicians whom, he said created the mess confronting Nigeria as a nation. He urged Nigerians to be discerning in their choice of who becomes the next president, saying people that created the problems do not have solutions to them.

He urged Nigerians to vote him as the next president, because he posses all it takes to lead Nigeria to prosperity.
When asked of his thoughts on restructuring, including how Nigeria could overcome ineffective budget process, the former Deputy Governor of CBN affirmed that, the country needs restructuring if it must prosper.

” We need to restructure so that this country can prosper along the economic scale at regional basis. But some people don’t want it because it suits them. Our budgeting process as currently is, can’t be effective. In a situation where between 70 to 80 percent of budget goes in to servicing of personnel and payment of salaries, we can’t progress that way. Most of the problems confronting us as a people are well known to the leaders. But they won’t address them because they don’t want to lose popularity.

“Why would a leader that promised to end subsidy payment continue with it? . Why do continue to export raw crude oil and import refined petrol at exorbitant price and pay subsidy on top of it ? If we can’t fix our refineries, we sell them. It may be expensive in the short term, but with time, the price will crash as more people enter the market. We saw what happened in GSM. Our leaders know this, but they won’t do the right things because of fear of losing popularity “, he added.

NEWS Ex- CBN deputy Governor, Moghalu, to run for president under YPP was last modified: May 24th, 2018 by Igbokwe John